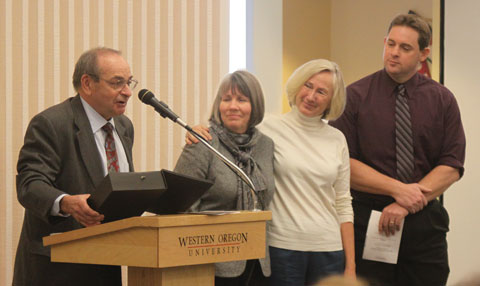 On May 3 at 1 p.m. at the Werner University Center Plaza, Western Oregon University released new academic and athletic logo marks for the university, designed by Rickabaugh Graphics. The event was emceed by dance professor Darryl Thomas and included remarks from Associate Provost David McDonald.

It has been twelve years since WOU updated its logo, last modernized when the university changed its name from Western Oregon State College to Western Oregon University. As WOU has evolved rapidly over the past several years, so have the demographics. This has introduced a need to update the look of the university to the public and the campus community. Associate Provost David McDonald said, “The university’s new mark and logo represent the new energy and strength of WOU. They also represent our historic focus on each student and the importance of education serving to illuminate a path of opportunity for our graduates.”

“We are so excited to unveil our new athletic logos and marks. Developing an identity and brand is crucial because it tells the world how you see yourself now and in the future. The new marks will be a source of pride for our entire department as well as all Western Oregon students, faculty, staff, alumni and friends,” said Athletic Director Daniel Hare.

Rickabaugh creations have been featured in virtually every major design publication, highlighted in numerous articles and appeared in over 100 design annuals. Located in Columbus, Ohio and founded in 1986, Rickabaugh has had a number of large clients including Ohio State University, Vanderbilt University, Texas A&M University, the National Football League, the National Basketball Association, the National Hockey League, and Major League Soccer.