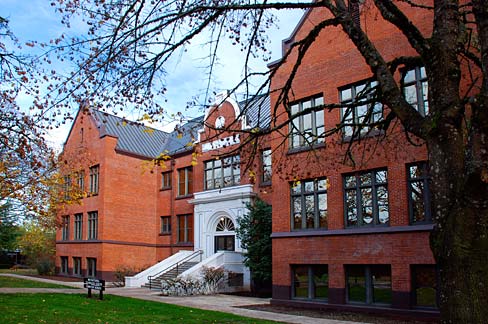 There are some folks on campus who seem to be involved in everything and know everyone. They walk from one end of Western Oregon University’s campus to the other with a constant stream of people saying hello. Jon Tucker is one of those people.

Tucker, the director of Werner University Center and Student Leadership and Activities, hadn’t started out his path in higher education planning to go in to student affairs. It was a life-changing event when he was 24-years-old that altered his dreams and goals. A week after completing his master’s in industrial relations and human resources at the University of Oregon, he was diagnosed with cancer. Tucker’s life was put on hold while he spent a year with his family so they could take care of him while he recovered. During that year, he thought about his passions and how much he enjoyed being a resident assistant in University Housing. Tucker realized that he could make a career out of what he loved – student affairs.
He is glad he trusted his gut and followed a career in student affairs. “The student contact and constant ever-changing nature of what I do has kept me in this field. No day is ever the same as the previous day, which works well for my personality,” he said. He’s not exaggerating when he says no day is ever the same. Tucker manages a staff of 13, works with the PLUS (Peer Leaders Understanding Students) team, attends a plethora of committee meetings and events from Staff Senate to Student Media Board to planning meetings for Homecoming.
A big project he has been involved in for the past couple of years has been the remodel and construction of an addition to Werner University Center. A large room with a wall of windows was constructed above the lobby for the Pacific Room, providing a multipurpose lounge and meeting room space on the second floor. The project also shifted around some of the offices, creating more lounge space for students. This is one of the many facets involved in a student affairs position.
Student affairs wasn’t the only career path that Tucker considered. “It was either student affairs or astronomy.” He joked that maybe when he retires from student affairs, he’ll get a master’s in astronomy so he can teach. Although his career hasn’t followed the skies, astronomy has remained a hobby.
Another hobby of Tucker’s is volleyball. He has travelled internationally for tournaments, and his current schedule has him playing both locally and regionally. Travel is also one of Tucker’s passions. He went to Costa Rica last fall for vacation and has participated on multiple Alternative Break Trips through WOU (including Cape Verde, Africa, this past December). His plan is to go on a big trip every two years.
Jon Tucker is a very busy man, but it’s that busyness that has encouraged him to stay at WOU. “If you had asked me when I first got here if I was going to be here for almost ten years, I would not have believed you. But suddenly I am,” he said.
“It is a function of the relationships and the people I’ve met, the ability for me to connect with students. In my role at another institution I may not have had that chance. That’s a huge positive for me. I love to be able to walk across campus and say “hi” to two dozen people along the way because people just make connections that are more meaningful at Western than I’ve experienced at other schools.”

…he collects movie posters and among the 100 or so he has, includes the Academy Award Best Picture posters for the past 35 years.
…he’s addicted to the thrill of roller coasters. He’s been on about 100 different rides and tries to find them wherever he travels.
…the top four places he wants to travel to are Italy, Greece, North Africa and Argentina.
Winner of the 2009 Mario and Alma Pastega Award for Staff Excellence, nominated by his colleagues, Tucker’s enthusiasm and work ethic have earned him respect and admiration from people all over WOU. Angie Barry, office coordinator for WUC, said, “Jon is a wonderful role model for students, staff, and faculty at WOU. In the midst of all of that he does, he maintains an exceptional attitude and offers unconditional support to those fortunate to be around him. Jon is well on his way to leaving a positive and lasting impression on our campus, and his efforts to improve our university will undoubtedly be felt for years to come.”