Home » Uncategorized » What, are you deaf? 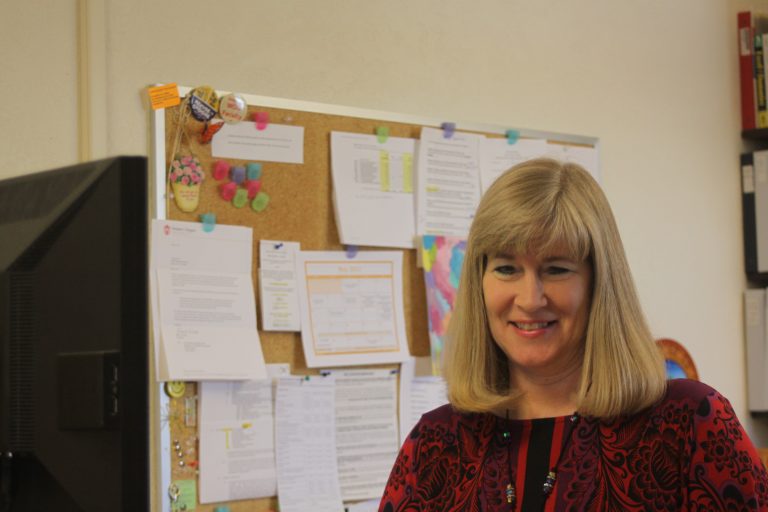 If you weren’t already aware of the deaf population around campus then you will be now! This year the Residence Hall Executive Board put on a program named “The Disability Obstacle Course;” this program was constructed and put together in hopes that the students at Western Oregon University would learn more about some of the disabilities that they might encounter here on campus!  Some of the stations that were at the program were: Deaf, Blind-Deaf, Blind and Dyslexic. All of these stations gave students an opportunity to expand their knowledge of the disabilities and how students who have them deal with them with them on a regular basis through daily activities.

At the Blind station students learned myths about the blind community such as: most blind people are not fully blind but actually have tunnel vision or some sort of visual impairment and that there is actually an etiquette to waving the cane back and fourth. With these thoughts in mind students were allowed to choose a pair of goggles with different levels of blindness or just a blindfold and were given the challenge to go through the obstacle course set up for them. At the end of the course students reflected on how they felt and what they thought about the whole experience. Also at the blind station there was a piece of paper with the Braille alphabet set out and then an actual parchment of Braille that students were able to “decode” and find a message in.

The following station students encountered was the “Deaf” station! At this area students were given the task of taking a parchment with a simple message on it and communicating it to their friends. Now this was no simple task because most of the phrases and sentences were not easily “acted” out. Students had to expand their minds and thoughts in order to communicate the message. Most of the students were frustrated and reduced their movement to simply mouthing the words  and by doing this students realized the troubles that a lot of deaf students have to deal with when dealing and interacting with hearing people.

The following station that students could learn about was the “Dyslexia station” at this station students were told to write their name down through the reflection of a mirror, draw a star in-between two others starts (to stay in side the lines) and then to also copy down a random sentence with their non-dominant hand. At the end of the station students were asked how they felt about the whole opportunity and most of them found it very frustrating. The interesting part about the copying down a sentence situation was that the words they were copying down did not actually make a grammatical or understandable sentence. This related back to dyslexic students because in the minds of those with the disability they are so concentrated on writing down the letter and making that work that they don’t understand the fact that they are not making sense.

At the Blind and deaf station students were given blindfolds as well as ear plugs and were told to go “shopping” for clothes and food supplies. Students had to use their hands to feel the texture and the weight of everything in order to decide what they would be “wearing, and eating.” Many of the students ended up with ridiculous outfits and ridiculous food products that don’t go together. The students also learned about how deaf and blind people communicate. It is a form of sign language but instead of seeing with their eyes they have to see with their hands. They use their hands to feel out the signs that people are communicating with.

After the whole program their was an excursion to the Oregon School for the Deaf the following day. Students signed up for a seat on the school bus and then was taken over to the School’s famous “Nightmare Factory.” This haunted house is put on every year by the school for the deaf  and is one of their biggest attractions each year. The whole haunted house is ran by deaf or hard of hearing students and teachers with some hearing volunteers as well. Students waited in line for about an hour and a half for one of the best scares of their lives. But while they were also waiting in line they had keen opportunity’s to interact with deaf people especially with one of the students being deaf themselves. At the end of the night the students all completely agreed that it was “an experience with the time and money”

Overall the entire program and excursion was a very educational and memorable experience for all the students who participated in the events that took place. These students are now educated about the disabilities that everyday people have and can be more sympathetic and helpful to those who have them.