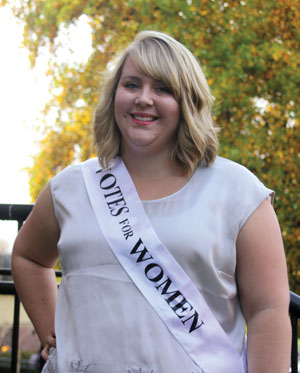 It’s hard to know when a group project for class will lead to real life collaboration, but for Western Oregon University vocal instructor and alumna Janene Kirkpatrick (2002, B.A. Vocal Performance; 2005, B.A. Business), that’s exactly what happened.
As a project for their doctoral studies at the University of Oregon, Kirkpatrick paired with classmate Bereniece Jones to create a pretend summer opera festival, unaware the ideas they shared about organizing an opera company from scratch would lead to the very real Cascadia Concert Opera, a 501c3 organization based in Eugene, which just finished its fourth season of performances.

Almost entirely funded by contributions from donors, Cascadia strives to connect its singers, all professionals, with new audiences—people who might not have ever experienced opera before—by making it affordable and accessible.

Scene from “The Merry Wives of Windsor” with Janene Kirkpatrick ’02, ’05 and Bereniece Jones

Stripping away the costumes and set and substituting a pianist for traditional full orchestral accompaniment, the opera company rests on “the story and the impact of what it’s like to be really close to a singer who’s really unamplified,” Kirkpatrick said.
“We found that it was actually very well received, both by established people, who liked operas, who were sort of aching to see more operas, affordably, and by people interested in this new very low key type of production,” she continued. “We’ve been growing from there.”

Cascadia’s most recent opera was “The Merry Wives of Windsor” by German composer Otto Nicolait, a tale inspired by Shakespeare, and—per Cascadia norms—performed in English at venues around Oregon, including an Oct. 9 appearance at WOU.

Far from coincidental, the performance in Smith Music Hall also signaled how connections Kirkpatrick made during her undergraduate degree at WOU have come full circle through the foundation of Cascadia Concert Opera. In fact, Music Professor Kevin Helppie, her vocal teacher at WOU, performed in the opera company’s 2009 pilot program—Gianni Schicchi, a one act by Giacomo Puccini—before becoming one of Cascadia’s first board members the next year.

“I’m a member of a group, and so is [Kirkpatrick], called the National Association of Teachers of Singing (NATS),” Helppie said, explaining how he discovered the emerging opera company. “They [Kirkpatrick and Jones] sent out an announcement for somebody to sing a particular part in a particular opera, and I had sung that part before. The group was going to meet during the summer. Most teachers have more time during the summer, and I thought this would be kind of a fun activity to do. I responded to their inquiry, and I guess they took me on reputation.”

Kirkpatrick’s inclusion of Helppie—and her subsequent transition from student to colleague—was based on more than reputation, though. In fact, after graduating from WOU and obtaining her Masters of Music from Central Washington, Kirkpatrick was invited back to Salem to perform alongside Helppie. Little did she know the brief alliance as singers was precursor to their current professional relationship, both as Cascadia Concert Opera staff and as WOU faculty.

“We were realizing that we have known each other for about 15 years. For me, particularly, that’s nearly half my life that I’ve known this person and worked with him on and off in some capacity,” Kirkpatrick said. “You never really know what people you work with are going to be sort of fixtures in your professional life.”

According to Kirkpatrick, Helppie has been indispensable in providing a pathway into Salem: “He has excellent connections not only with other musicians but with people who run venues[…] He has connections with media outlets. There’s no way we could have done what we have done in Salem without his involvement.”
For Helppie, Cascadia has also helped him realize a long-standing personal goal: bringing opera to Salem. Oregon’s capitol, Salem boasts a population of 155, 711, as of July 1, 2011 updates. Nonetheless, it lacks some of the arts community one would expect based on its size—there is no professional orchestra, no ballet company, no opera company and no theatre (anymore).

“It’s kind of curious that a city of that size doesn’t have those organizations,” Helppie said.

Although he had personally considered bringing a professional opera to Salem, Helppie said the financial risk of sponsoring a few opera performances with a fully paid orchestra could probably run well over $10,000, and with no history of residents attending such performances, he considered it a “foolhardy risk.” Therefore, Cascadia was the perfect fit—“It has helped me fulfill a mini-dream of bring opera to Salem without a huge risk,” he said.

From the beginning, Cascadia’s goal has been “making exceptional and imaginative opera accessible to audiences throughout the Pacific Northwest,” as stated on its website. Besides offering a majority of its performances for free to audience members, the opera company also looks for venues that will eliminate other auxiliary costs associated with mainstream opera, such as parking.
Universities, public buildings, libraries, retirement homes and churches have all hosted performances; most donated the space at little or no cost to Cascadia, another way the company has been able to cut costs.

In 2010 and 2011, Cascadia Concert Opera received a grant from the Lane Arts Council. “We were excited because we felt like that showed a real support from the community,” Kirkland said.

In addition, she said individuals are also responding to Cascadia: “People actually want to give money to it. We’re able to do more and more financially every year.”
Nonetheless, Kirkland, along with cofounder Jones and the other board members have an all-hands-on-deck approach to running the company.

“We have no staff,” Kirkland said. “Four out of five board members were principal singers this season. We were learning arias and staging, we were behind the scenes putting up posters and doing updates on the website, we were talking to audiences and journalists—it’s a huge amount of work for a small group of people.”
According to Helppie, Kirkpatrick’s dedication to Cascadia is unique: “Most people don’t want to tackle something of that magnitude[…] To take on something like that is a big accomplishment for someone fairly early in her career.”

Photo: Rehearsal for “Tales of Hoffmann” with Janene Kirkpatrick ’02 and tenor Derek Larson

As for WOU, Kirkpatrick remembers the university being “a place where you could explore almost any kind of music[…] It’s a great place to become well-rounded and aware musicians.”

Now a vocal instructor herself, Kirkpatrick sees that mission continuing: “I feel like that core element is still at the heart of everything that department is doing. [Musical variety] is really kind of their identity. It’s nice to be on the other side now and be able to contribute to that.”