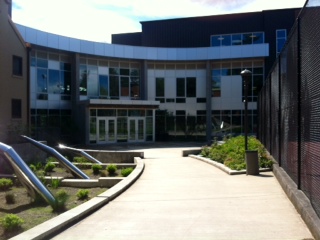 You might be thinking “What exactly is the ‘Improvasaurs?”

Well I am glad you asked! The Improvasaurs is the on campus Improv comedy troupe. Now what exactly is Improv? Have you ever seen the show “Whose Line is it Anyway?” Well it’s almost exactly like that show except it’s more intimate. Improv comedy is where people perform a scene made up on the spot from a suggestion from the audience. This can entail scenes that are realistic to down right crazy talk! The performers who are apart of this troupe perform on stage many different scene type based games or “gimmick” based games such as party quirks, moving bodies, or hesitation.

A lot of people think that Improv is very easy to do but this is one of the most inaccurate statements that someone can make about Improv. In order to have a successful scene in Improv there are some basic rules that must be followed such as never saying no, and never asking questions. Now why are these rules so essential for the success of a scene? Well while a scene is progressing whatever anyone says it is known as an “offer” or something that adds to the scene and forwards the plot and whenever there is an offer the other people in the scene must always accept that offer. If you negate it then the scene is shutdown and it’s hard to continue the scene. Also the reason for never asking questions is because they never add imput or information to the scene and it puts pressure on all the other people to come up with an answer.

Along with those rules there is a basic structure to make a scene successful; by establishing 1) character 2) relationship 3)objective and 4) Location. If you establish these four things in a scene than it is bound for success. These four things are essential for a scene because they give substance to a scene and when that happens people feel very interested about that scene because it becomes relate-able which is what intrigues the audience member.