Home » Uncategorized » From Monmouth to the Ivy Leagues 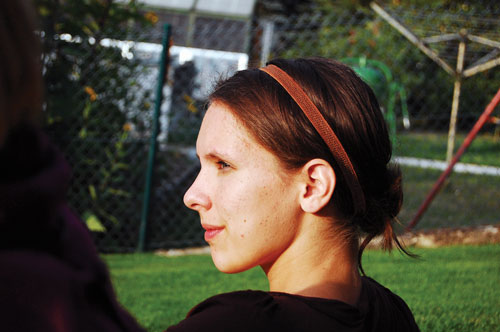 “Difficulty is itself opportunity.” Boethius, Consolations of Philosophy

As the autumn leaves change colors this year, WOU alumna Allison Glasscock (Honors Program Graduate, B.A. in Philosophy, 2010) is settling into her new home, New Haven, Conn. Alison Glasscock is embarking on the first year of her Ph.D. in the joint program in classics and philosophy at Yale University, which hosts one of the world’s best philosophy departments. However, had it not been for her experience at WOU, her journey from West Coast to East Coast may never have happened.

WOU: a philosopher in training
As a freshman at WOU, Glasscock was a newly transplanted Oregonian, having recently moved with her family from the Sacramento, Calif., area. A lover of literature and language, she declared an English major and duly enrolled in her first term of classes. English Professor Henry Hughes, her first advisor, suggested at one of their first meetings that Glasscock looked like she should be a professor. She responded, “I don’t want to be a professor; I want to write novels.”

Then she read Plato for Philosophy Professor Ryan Hickerson’s class. “It was the hardest thing I’d ever had to do, and I guess I found that more rewarding than other things that may have been easier,” she said.

For Hickerson, Allison’s propensity for philosophy was immediately clear: “Allison was already a philosopher when I first met her, she just hadn’t read very many philosophy books yet. The thing that convinced me that philosophy would be a good fit for her was her curious and analytical nature. She was dissatisfied with stock explanations and always wanted to know more about their basic assumptions.”

“When I think about Allison I think of a quote from Aristotle, ‘Excellence is not an act, but a

habit.’ Allison was an exceptional student in part because she took the project of her own education seriously. She always tried to develop her self, rather than simply move on to the next stage of her life, or do what needed to be done to get through. She worked really hard, and really thoughtfully,” said Dr. Ryan Hickerson, philosophy professor.

That spring, Glasscock attended the Pacific University Undergraduate Philosophy Conference and presented the very first philosophy paper she had ever written. By the end of her first year at WOU, Hughes’s suggestion didn’t seem so absurd to Glasscock—doing graduate school and being a professor had become attractive options—although she had replaced Hughes with Hickerson as her academic advisor, and ultimately, dropped English in favor of philosophy.

From her initial foray into the classics to the arduous process of applying for graduate programs, Hickerson was an important part of Glassock’s philosophical success. “The main thing is that Ryan went really out of his way to help me accomplish my goals. That’s something you find a lot with professors at Western. They’re willing to go above and beyond what’s strictly required.”

In the beginning, that meant giving her a summer reading list of philosophy books. Later, Hickerson spent significant time outside of office hours discussing the different options Glasscock had regarding graduate schools.

In addition, “he read way more drafts of my honors thesis than he was ever obligated to read, and he always gave me wonderful comments,” Glasscock said, laughing.

Outside of philosophy, Glasscock’s years at WOU involved a handful of other experiences, including a term studying abroad in Tübingen, Germany, involvement with the German Club, and employment at Hamersly Library and the Writing Center—all useful training for her future as a philosopher.

“The trip [to Germany] helped me see myself and the United States from a new perspective. It also motivated me to get to know other exchange students at WOU when I returned,” she said. “Additionally, working at the Writing Center was valuable because in the process of explaining how to write, I myself became more aware of my own strengths and weaknesses as a writer.”

After deciding on a future in philosophy, Glasscock never doubted her goal of doing graduate work in philosophy—until she started receiving rejection letters from the schools where she had applied. Also accepted for a Fulbright English Teaching Assistantship to Germany, in the end, Glasscock declined the prestigious Fulbright award in favor of a one-year M.A. in philosophy at the University of Toronto.

Toronto: raising the stakes
“I knew that would get me closer to what I wanted to do—get accepted to a Ph.D. program,” she said. “When it came down to it, I sort of trusted my intuition, which is maybe not a very philosophical thing to say.”

It turned out to be a lucky decision, nonetheless. Glasscock met her boyfriend of two years, now a third-year philosophy Ph.D. student, during her first week at Toronto.

Academically speaking, the nine-month academic year in Canada “was really important because it challenged me in a lot of ways that I hadn’t been challenged before,” Glasscock said. The department was bigger than she was used to, the classes much harder. While she had felt extremely competent at Western, the shift from undergraduate to graduate level work challenged her confidence.

“Making it through that year was significant in that it showed me that hard work really does get you places,” she said. “There were times I was really sure that I wouldn’t get into a Ph.D. program and wouldn’t be able to go on. In retrospect, that experience of feeling like you’re not going to be able to succeed is really good.”

Even though she was still writing her final paper when she flew home to Oregon after the whirlwind nine months, she passed her program with flying colors and started her next round of Ph.D. program applications.

Glasscock spent her next year at home in Monmouth, working at WOU’s Writing Center, perfecting her personal writing sample, completing applications and resting. Whereas she had received rejections from five of six universities during her first round of applications, pre-Toronto, come April 2011, Glasscock had offers of acceptance from six of nine top philosophy departments, including Yale, Toronto, Cornell, Stanford, the University of Chicago, and the University of Pennsylvania.

Her resounding success came perhaps as less of a surprise for Hickerson, who had always admired Glassock’s diligence.

“When I think about Allison I think of a quote from Aristotle, ’Excellence is not an act, but a habit.’ Allison was an exceptional student in part because she took the project of her own education seriously. She always tried to develop her self, rather than simply move on to the next stage of her life, or do what needed to be done to get through. She worked really hard, and really thoughtfully,” he said.

Yale: the reward of excellence
Busier and happier than she has ever been, Glasscock said she picked Yale partly because she knew it would challenge her the most. Working every day from around 8 a.m. to midnight—at her house or at one of Yale’s libraries—she said the continuum between weekdays and weekends has practically disappeared. She has seminars two days a week, and is also taking a Greek class three days, participating in a German reading group every week, and learning to play squash—a sport the other philosophy graduate students have convinced her to try.

Even with her intense workload, Glasscock said Yale has already become home—the campus, with its ivy-covered buildings, British architecture, towers, and libraries, has provided a beautiful environment, but the welcome she has received from nurturing faculty and an interested circle of fellow students has created what she craves most: community.

Serendipitous surroundings are important for Glasscock since she’ll be there for a while. Funded for five years, the Joint Ph.D. Program takes most students take six and a half to complete.

Glasscock has not lost her ties to Monmouth, though. Her sister, Bethany Vianna, is finishing her Master’s Degree in Music in Contemporary Music with an emphasis on piano performance at WOU next spring, and her brother-in-law, Cassio Vianna, is teaching piano proficiency this term. And, of course, she’s still in touch with Hickerson.

“My time at WOU was extremely rewarding and my four years there were, so far, the most formative of my life,” she said. “My professors consistently encouraged me to pursue my goals and challenged me to do things that I would otherwise have thought impossible—or just too hard!”

According to Glasscock, those hard things, like reading Plato and completing an MA in one year, led to remarkable adventures, like entering a six-year Ph.D. program at Yale.

Her advice to WOU students is, fittingly, “Seize the difficulties—sign up for the hard things, challenge yourself, and see what opportunities arise.”