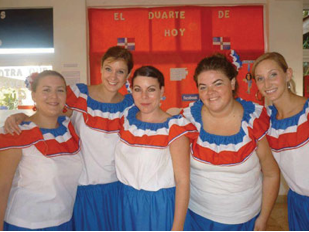 Picking paradise
Of the three, Bensen was first offered a position at CCHS for the 2011-12 school year; however, she initially turned it down for a different job teaching kindergarten in a rural village in Belize. That meant Geschwend was next on the list—although she was out of Oregon when she got the call, she jumped at the chance to teach in paradise, packing posthaste. Less than a month later, she boarded a plane, on her way to teach ESOL and then, after her first spring break, first grade.
Vowell, hired to teach middle school science in 2011, was simply up for an adventure.
“I had just told [professor Karie Mize] I wanted to teach abroad in a Spanish-speaking country. She happened to know Adam Slaton ’01—he was the principal at the school [CCHS],” Vowell said. “I think I’ll be a nomad for the next many years.”
This particular Caribbean island happened to be as good a place as any to sojourn, maybe better. After their first year in Punta Cana, Vowell and Geschwend both elected to stay for a second year, Vowell continuing with her science classes, Geschwend moving up one year to teach second grade.
By 2012, Bensen, too, had returned from her position in the Central American jungle, ready for a new place and a new job—naturally, international. Based on her ESOL endorsement from WOU and other experience, she was hired as CCHS’s ESOL specialist, working with third grade through high school.

Teaching
As new teachers, all three women agreed CCHS had both perks and challenges. The small classes, for example, were ideal for forging close connections with each student. Some activities have to be downsized, though, because there are not enough participants. The abundant preparation time was also a luxury, especially in comparison to time given to teachers in the U.S.
Geschwend, who has taught the same group of kids for two years, said the project-based curriculum provided multiple laughs. For example, each elementary class picked themes for different units.
One time, her students decided to focus on espionage: “My kids chose like spies,” she said. “For the whole month, we would walk from my class to art, to P.E.—we would walk like spies. They’d randomly roll, they’d crawl.”
While the non-verbal aspects of teaching provided entertainment, verbal cues were equally important. These spoken commands could prove challenging, though, particularly when the students didn’t understand English well. Geschwend and Bensen both said strategies gained from WOU’s ESOL endorsement were pivotal in their teaching success at CCHS.
“I had a couple kids that were from Russia who didn’t speak any English. That’s when the ESOL endorsement helped a lot,” Geschwend said. In the beginning, she taught “without words.” Before long, one of the students was picking up unique vocabulary. “The first project he did was on seals,” she said. “Now everything he does is about seals: ‘Dear Santa, for Christmas I want a seal.’”
Almost everyday, Geschwend’s students made endearing English blunders—stemming either from overconfidence or confusion—and she loved them.
They loved her, too. At the end of her second year of teaching, Geschwend’s students pooled together to give her an REI gift card—perfect for a girl who is most at home in the Pacific Northwest.

Island living
Of course, living along the Caribbean coast, the women found time to get their feet wet in more than teaching. Since CCHS is an elite private school, the teaching jobs came with multiple perks, such as access to several private resort beaches, free kayak rentals and discounts to popular tourist destinations.
During their first year, Vowell and Geschwend went on a whale-watching excursion where, according to Geschwend, “the whales were three times the size of the boat.” These up close and personal encounters with nature delighted Vowell, an amateur photographer.
“I’m the crazy [person] that will sit there for three hours just to get a good picture,” she said. “I like to be outside just watching all the time.”
Whether that meant observing bird patters, including seasonal and time-based appearances, or taking longs walks to study local flora and fauna, her outdoorsy streak serves her well, especially during her extra-curricular science and photography lessons; she enjoyed always gathering new things to learn and new subjects to teach.
Although CCHS provided one round-trip plane ticket per school year, going home for most holidays was not feasible. Thankfully, the island itself offered plenty of adventure. Longs holiday weekends—Dominican or American—often framed mini-excursions to the northern, southern or middle regions of the Dominican Republic.
“We went up to the mountains over Thanksgiving [break],” Bensen said. “That was very homey; we kept talking about how it was very ‘Oregon’…the geography.”

The weather, however, was nothing like home. “It’s summer forever—eternal sunshine,” Bensen described.

For Geschwend, the constant sun was sometimes too much: “I miss the cold weather. I always miss fall because we don’t get seasons [in the Dominican Republic].”

Little tastes of home were available—at times as close as the grocery store. “You can get almost everything you want, it’s just really expensive,” Geschwend said. Tropical fruit, freshly picked, was always a treat; however, imported products, especially those specific to Portland, sometimes triggered tears. “I started crying when I saw Bob’s Red Mill [products in the store],” Geschwend said.
At the school and at their apartment, the three women spoke English exclusively, but getting around the rest of the island required more creative communication. Technically, the local language is Spanish. Practically, the shortened expressions and slang words mean the local dialect has a steep learning curve.
“[The language] has been one of the hardest adjustments because I speak Mexican Spanish, then the Dominicans come along and chop all their words off,” said Vowell, who attended a bi-lingual elementary school and took Spanish through high school.
Bensen, too, took Spanish in college, including study abroad, but her most recent experience was in Belize, where she became accustomed to a Creole of Spanish and English. “There’s so much slang in every country you go to, that even if you speak Spanish, you have to start over,” she said.

Geschwend, who took only one term of Spanish at WOU, said outside the “bubble” of Cap Cana, communication hurdles have a domino effect. “I don’t know how to ask for directions, the roads are different, and driving, you have to be way more aggressive,” she said.
And that’s just when they rent a car. Usually, public transportation suffices—to an extent. Schedules, unfortunately, were not always convenient.“You can take a bus on Saturday mornings to the grocery store, but maybe you want to go get eggs a different day,” Geschwend explained.
Ultimately, figuring out how to get around is part of life abroad, Bensen said. “It’s the independence thing. It’s ok. That’s what you do when you’re travelling.”
However, even asking for help was not hard. “The actual culture is just a warm culture, very welcoming, friendly, and helpful. Plus, I love the music,” Vowell said.

Moving on
Despite the beauty of island living, Geschwend, Bensen and Vowell have all set their sights stateside for next year. Bensen plans to explore the ways service dogs can help children with special needs or emotional traumas; she has an internship with Autism Service Dogs of America lined up.
Geschwend is interviewing with Portland area schools. She’ll miss her extra prep time, but she is anticipating the return of the rain. Vowell wants to build on the middle school experience she gained in Punta Cana—“I love the students here,” she said—and to further her ESOL and Spanish skills, eventually finding a similar science or ESOL position in the Northwest.
Bensen encourages all future teachers at WOU to keep CCHS in mind. “If they need a year of adventure, independence, this is a really good school to come to,” she said. “If you’re someone who doesn’t feel comfortable with [being] thrown into a new culture you don’t understand, it’s an Americanized area we live in…it’s a good stepping stone.”
WOU’s presence remains in the tropics, though. Stephanie Burns, another Western grad, will continue working at CCHS, and Paul Neiffer will replace Vowell. Of course, Adam Slaton is staying, too.