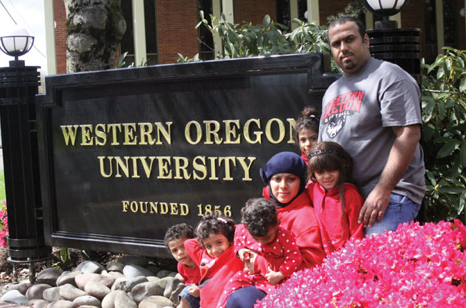 At age 19, Fatimah Alamatar put on a flowing white dress, styled her hair, picked up her bouquet of red roses and married Mohammed Alshawi. Two weeks later, the newlyweds moved 7,430 miles from Saudi Arabia’s burnt orange desserts to the Willamette Valley’s damp greenery. She didn’t speak English or know how to drive a car. He wasn’t sure how to raise a culturally relevant family in America while adhering to his Islamic values. They barely knew one another. But seven years, five kids, and four combined degrees later, Mohammed’s family has made it all work.

Lured by beautiful nature and excellent educational opportunities, two people arrived in Oregon in January 2006, ready to face yet unknown challenge and adventure. Called back by a lucrative job, the now family of seven packed their bags and headed home to Saudi Arabia in early May 2013, grateful for everything they experienced and learned as international students.

Educational adjustments
Initially, Mohammed and Fatimah settled in Salem, enrolling in Pacific University’s English language program. A year and half later, they transferred to WOU, where they both earned bachelor’s degrees in business (’11) and master’s degrees in education, focusing on information technology (’13).
The process was far from simple, however. Especially for Fatimah, the transition to an American university meant a radical departure from the Saudi Arabian educational system to which she was accustomed. Among other differences, men and women are educated separately, so not only did Fatimah face an initial language gap when attending classes in Oregon, but she also struggled to relate to male students and professors in an educational context vastly different from her upbringing.
“[When] I came here, I got embarrassed to be with the boys [in class] because that was first time for me,” Fatimah said. “Also, I never had a man teach me [before coming to WOU]. It was different. I was shy when I wanted to ask him questions. If I couldn’t understand, it was embarrassing for me…to communicate with a man.”
Her timidity, however, did not last. “Now that’s ok for me. I don’t get shy like before,” she said. In fact, she recalled a conversation with her undergraduate advisor Hamid Bahari-Kashani, professor of business and economics, when she successfully pleaded her case.
“[Bahari-Kashani] always told me what classes should I take,” Fatimah said. “He got mad at me when I got more [credits] than what they [wanted] me to have, more than 15 credits.”
Prior to an especially busy term when she needed a signature on her course overload petition, Fatimah said Bersani-Kashani “wouldn’t sign [the form] for me, but after I told him, ‘Please, I need to take this class now because I need to be with my husband, he just signed it for me.’”
Bahari-Kashani, who was born and raised in Iran, said that he is always ready to help all students—domestic or international—on their journey to graduation. Personally, he experienced the difficulty of learning English in order to complete his education. Professionally, he has watched WOU’s international students face similar challenges, both linguistic and cultural.
“Living in a country with different standards and norms is always difficult. It is easy when we are only a tourist. It is not easy when you are student,” he said. “Even some of the Oregonians, at the beginning, become homesick when they leave their family and stay on campus. For the international students, it is much bigger challenge.”

Bigger, but not impossible.

Fatimah, for instance, “probably has noticed our norms and expectations and she acts more the way we expect,” Bahari-Kashani said. Often, international students “are young people who learn fast. They have come to U.S. to become educated, well informed, and to be a more sophisticated individual when they go back.”

Cultural connections
Before the Alshawis came to Oregon, Fatimah wondered about the people: the Americans they always saw on TV “looked like cowboys.”
She thought she would have a hard time communicating with people—because of her race and because of her religion.
Nonetheless, Mohammed said it was not hard to be a Muslim in Monmouth: “In fact [other students] were respectful, and…willing to learn and see how Muslims practice their religion, and whenever they have questions, they ask—whether it’s about the Middle Eastern countries or Islam,” Bahari-Kashani said.
And although Fatimah had questioned how the outward sign of her Muslim faith—she wears a headscarf—would impact others’ perception, her actual experience was overwhelmingly positive.
“I like the people here: they always smile, they are friendly,” Fatimah said.
Like Mohammed, she also noted that students at WOU were more interested in than condescending toward her culture. She made friends on campus, through visits to the International Office and her involvement with clubs.
‘International students can be and often are very successful in our setting. Rather than asking them to understand us, we should try to understand them too. This would make the life much easier for them,” Bahari-Kashani said.
Stepping out of her comfort zone to teach others, Fatimah participated in multiple aspects of student life, adding cultural enrichment on campus. International students and scholars advisor Adria Zampich-Gibbs, said Fatimah’s energy and love for Western and her family always made their time together enjoyable.
During one of the international night events, Fatimah and several other female Saudi students adorned attendees with henna tattoos, elaborate flowering designs curved into ornate swirls. For Fatimah, the temporary body artwork resulted from years of childhood doodling combined with traditional technique picked up along the way. Especially for weddings and other celebrations, the henna tattoos are to Saudi women what manicures are to Americans: a vibrant, visible display of culture.
Other aspects of the Alshawis’ culture, however, were practiced more privately during their time in Oregon.
Adria said during her visits to the Alshawi house, Mohammed would sometimes roll out his prayer mat, kneel, and start saying the Shalat, Muslim prayers corresponding to specific times of day. Despite the Alshawis’ continued devotion to their religious practices, the daily ins and outs of Islam took intentional—and sometimes time-consuming—effort. For Fatimah, seemingly simple tasks like grocery shopping took several hours because she had to painstakingly read each label, scanning for ingredients that would violate the family’s religious doctrine. Obtaining meat required even more planning, since Mohammed and Fatimah had to purchase special cuts from Halal suppliers in Portland, which also meant a long drive up I-5.

Driving itself was a new adventure for Fatimah. Before coming to Oregon, she had never sat behind the steering wheel since it’s illegal for women to drive in Saudi Arabia. As a student at WOU, though, she earned her driver’s license in 2008 and enjoyed splitting pilot duties with Mohammed on subsequent trips during their studies.
In the end, although Arabic and American cultures do differ considerably, the Alshawis’ experience at WOU balanced the same mix of study, family and fun that all students strive to create. Mohammed’s list of small town inconveniences also mirrors most American students’ opinions: Monmouth lacks viable nightlife activities, it can be boring during holidays, and you definitely need a car to get around.
Family time
Most significant to their time in the U.S., Mohammed and Fatimah said the opportunities their children had—to learn English, to attend WOU’s childcare classes, to experience life in America—were priceless.
According to Fatimah, Monmouth was perfect for raising a family: small enough to be safe, nice enough for frequent park excursions, friendly enough to feel welcome.
During academic holidays, the Alshawis ventured further away, jetting to Disneyland three times as a combined birthday celebration for their children, all born in the spring. To celebrate their final months in the U.S., the family flew to Florida this April, treating their kids to Orlando Studios, SeaWorld and Disneyworld—the happiest place on earth.

The oldest four Alshawi children (Sarah, Nora, Reem, and Sami) all speak English fluently, though on sunny days in Monmouth, they loved running around outside, exploring, climbing, swinging, and laughing, more than practicing their second language.
Amirah, the baby, preferred snuggling with her parents, watching the world with her beautiful big eyes. She’ll have to wait for the Alshawis’ return visit to truly understand the life they’ve had here—when she’s a little older.
And return, they will, someday.
“I want to do the best thing for my kids…I am glad they are here now,” Fatimah said shortly before the Alashawis’ return to Saudi Arabia. Some of her best memories—playing with her kids at the local parks, shopping together in Salem and riding the OHSU tram on visits to Portland—happened during her family’s formative years in Oregon.
“I want to stay here forever. The weather, the people, the place, everything here is good,” she said.
Al-Hasa, the Alshawis’ city in Saudi Arabia, dwarfs Monmouth in size with a population of approximately 1,150,000. Though the sunshine there is nearly constant, Fatimah said it’s not green: “[Monmouth] is a good place. There are trees everywhere and grass.”
Even the buildings at WOU are more colorful compared to the ubiquitous cement structures cropping up from her hometown’s desert sand.
“I think one day I will come back here will all my kids,” Fatimah said.
Presently, though, the best opportunities await the Alshawis on the Arabian Peninsula. Mohammed’s job as commerce inspector with the Ministry of Commerce and Industry in Saudi Arabia will provide financially for the family; there, too, they will reconnect with the grandparents and siblings whom they only saw on a handful of visits over the past seven years.
Still, out of sight does not mean out of mind. “I’ll always carry the beautiful memories [of WOU] wherever I go,” Mohammed said. “…It’s one of the best places that I have ever been.”