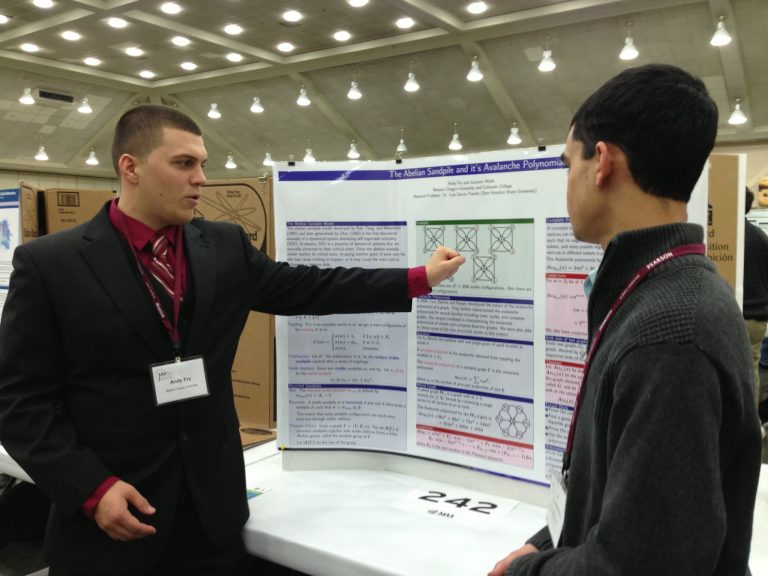 As summer approaches, students are looking for things to do, whether that be a job, volunteer experience, vacation, or internship. That’s exactly what Andy Fry is meaning to do, just as he did the previous summer. Last summer he participated in 5 week summer internship in Hawaii researching theoretical math.

Fry—a junior this year—is majoring in math, hence his interest in a 5 week program involving mathematics, with a minor in physics. When asked what he wanted to do after school, he responded: “Right now the track is to get a Ph. D. in math and go to some grad school, not sure where, but get a Ph. D., and either become a professor or either work in some industry of math.” Very passionate about his field of study, he looks forward to all he can do with his future and his prospective degrees.

I asked him about his internship in Hawaii and he described that those who attended where placed into research groups. Each group received a topic that they spent 3 weeks learning about, 1 week researching, and then the last week putting it all together for a presentation. His topic was about the “Sand pile model and it’s an avalanche polynomial. Basically, there’s this subject called graph theory, like x/ y axis, but you basically have vertices like dots and then lines or edges connecting those dots to make some sort of figure. It models theoretically a sand pile. When you get a sand pile too big, it crashes and tumbles and you create an avalanche. Well, the same sort of thing is applied to the graph… We looked at what happens when the numbers get too big, how does it topple, and that was basically our project.”

After attending this internship, Fry was able to experience a variety of conferences throughout the school year in regard to his project. He first visited SACNAS (Society for Advancement of Chicanos and Native Americans in Science) where he wasn’t able to present his project, but he was able to see others’ and absorb all the information, including information about graduate school. After that, in the first week of winter term, Fry traveled to Baltimore to present his project at the Joint Math Meeting. And just earlier this month, he was able to attend the Northwest Undergraduate Mathematics Symposium (NUMS) at Oregon State University where he was awarded the Pi Mu Epsilon (a math honor society) second prize for Outstanding Scholarship.

When asked what he felt he had benefited from this experience, he responded: “I definitely learned a lot about grad schools, a lot about the professional math world, you know. I didn’t know anything about research; I didn’t know anything about applying to grad schools. I was like ‘we do research in math… What? What does that entail?’ So I learned so much. I feel like my mathematical prowess just grew exponentially… It motivated me more because I wasn’t sure if I wanted to go to grad school and talking to all the professors at both of the meetings and over the five weeks of the summer really pushed me towards ‘hey, I can actually do this’.” I also inquired as to whether or not he would be participating in another internship this coming summer. He replied he had already been accepted in an 8 week program in San Diego. The 8 week program spends 1 week on learning, 6 weeks on researching, and the final week on presenting their findings.

Fry is out chasing his dreams, grasping at opportunities to develop his skills and knowledge. His experiences can be put on a resumes and give him a leg up when applying to graduate schools or any other job. He did mention that the internships are “highly competitive!” But that wasn’t daunting enough to hinder him from going after it not once, but twice now. It’s students like him—ones that truly love their major and what they’re studying—that make WOU a greater school, just for having a rising star such as Fry.