Home » Student life » A friend, a student, and a leader: Jordyn Ducotey’s life as a sophomore at WOU 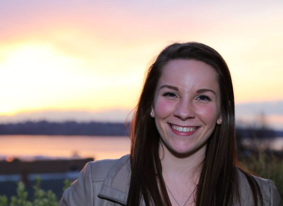 Jordyn Ducotey is currently a sophomore, studying Communication and minoring in ASL studies. She is known throughout Western’s campus for her fun personality and leadership initiative. I recently got the opportunity to sit down with Jordyn and learn more about her life as a Western Oregon student.

Jordyn quickly fell in love with Western’s campus and the strong sense of community the school has to offer. She also loves getting involved. Her freshman year of college she was a member of Heritage’s Hall Government where she worked as activities director. Within the group she established herself as an organized, creative, and efficient member.

Now a sophomore, Jordyn is currently working as an RA in Heritage’s 3rd Gunn; the hall that she herself lived in last year. Jordyn loves her residents, and feels blessed with the hall she was given: “My hall is really fun,” she says, “we all are just one big family.”

Along with being an RA, Jordyn has joined the school’s PLUS Team; the group that works with incoming students and organizes SOAR. What interested her in joining PLUS Team, was the opportunity to work with new students. PLUS Team has already organized and finished its transfer student orientation day which Jordyn commented to be, “really crazy but nice, because it was a lot less crazy than normal SOARS. It was nice to get oriented with how it’s going to work and get into the flow of things before we get into the summer SOARS.”

When talking about her future after Western, Jordyn’s plans are to attend the University of Washington to receive a Masters in Audiology. That has been a long term goal for Jordyn so she hopes to achieve it after finishing WOU.

When asked what her favorite experience at Western has been so far, Jordyn found it difficult to pick just one, “My entire experience here so far has been awesome, there is nothing really that is standing out because it has all been super great. All the organizations: Hall Government, RA, PLUS Team, have been awesome and I am so glad that I have been a part of them.”

Some final thoughts that Jordyn has gathered after her first two years of college are, “let other people do their own thing. Everyone is their own person and finding a way to accept that, maybe even if you don’t agree, makes everyone happier and creates a better dynamic for the people you are around.”