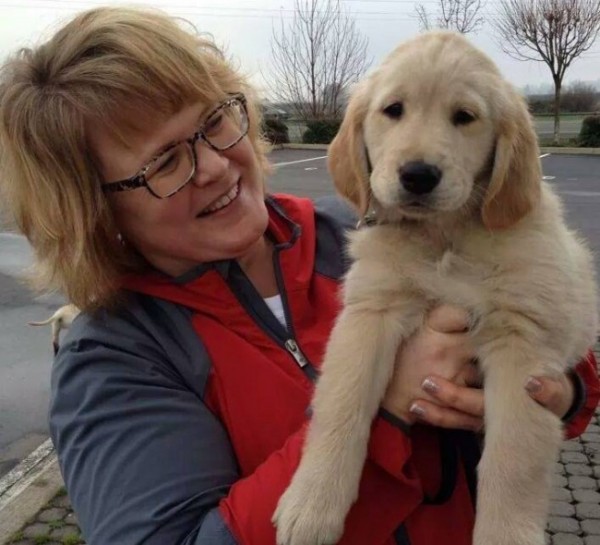 “When people see me on campus, they look down for the dog,” said Donna Litchfield with a smile for Jaunty, the Golden Retriever puppy sitting at her feet. Litchfield is known all around her office in the Western Oregon University Physical Plant for the guide dog puppies she raises. For the last six years they have been accompanying her everywhere she goes.

Litchfield is the administrative program assistant for the planning office at WOU. “What I love about my job is getting to know all the construction going on and what’s happening to the buildings,” she said. In the 17 years she has worked at WOU she has enjoyed studying the buildings inside and out and learning the history of campus.

Litchfield has a special appreciation for her job because of the support her work with Guide Dogs for the Blind (GDB) receives from her coworkers and her supervisor, Tom Neal. “I’m very fortunate that my work environment allows me to do that,” she said. “[My supervisor] sees the growth and the learning that [the dogs] get to do, and he understands how this is just the perfect environment for them.” In Litchfield’s office, Jaunty, like her five predecessors, has more exposure to unfamiliar sights, sounds, and people than she would if she stayed home. Litchfield is always introducing her to something new – an elevator, an open stairway, office machinery – so that she will learn to be calm and confident in any situation.

Socializing with people is another important aspect of Jaunty’s training, as long as it is controlled. When she is wearing her green training vest, she is supposed to concentrate on Litchfield; only when the vest is off is she free to play and interact with other people. At three and a half months old, Jaunty is too young to fully understand that distinction yet, but by the time she leaves Litchfield, she will know exactly how to behave when she is wearing her vest.

Jaunty’s informal training, which began when she was eight weeks old, will end after approximately a year, when Litchfield will return her to GDB. Jaunty will then go through formal training, during which she will be taught to guide her blind future partner through daily activities. When her training is complete, she will meet her partner, and after spending two weeks working together at the GDB campus in Boring, Ore., they will graduate from the program. Litchfield will be at their graduation ceremony to see her puppy one last time.

It is impossible for Litchfield not to form a close bond with the puppies she has raised. She stays in contact with all of their owners, and she adopted the first puppy she trained because physical defects had disqualified him from being a guide dog.

It is not unusual for a guide dog to fail during training, and since the demands on working guide dogs are high, Litchfield was initially hesitant to be a trainer. After learning about the program from her co-worker Paul Finke, whose daughter was a puppy raiser, she started attending local GDB meetings. Litchfield then puppy-sat for a year before taking on a puppy herself because she was “really afraid of messing a dog up.” Training is a serious job, which she takes seriously. Acquaintances may think of Jaunty as the pet she gets to take everywhere with her, but Litchfield’s response is, “She is basically put into my custody to raise…she’s not mine.”

Litchfield loves the dogs she is given to raise, and she loves watching them progress from bouncy puppies to the extraordinary guides and companions that graduate from the program many months later. Though challenging, training is a “very, very rewarding” process for Litchfield. “People would ask about doing this kind of volunteer work and it’s a big commitment,” she said. Before they take on the responsibility of raising a guide dog puppy, she advises potential trainers to ask themselves a simple question: “Can you do it, can you commit to having something at your side all the time?” Litchfield’s answer to that question is a wiggly, distractible puppy, who in just a year will grow into a companion capable of being her partner’s eyes.