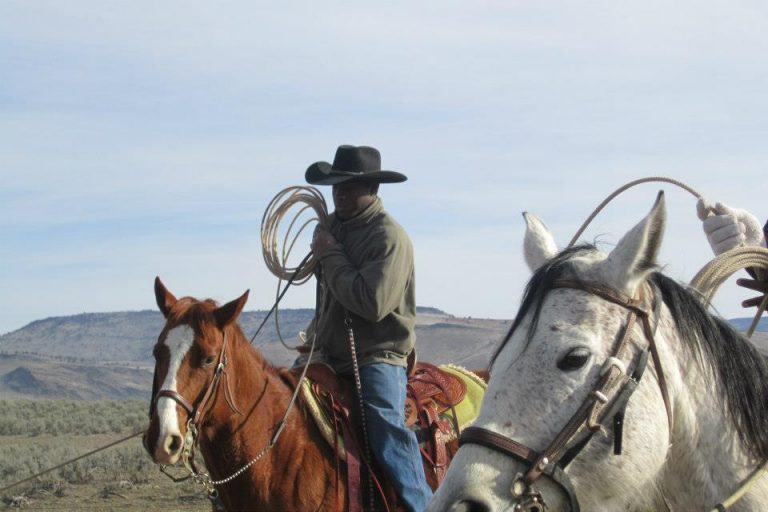 At Western Oregon University, Gabriel McKay is a senior in criminal justice; at home in eastern Oregon, he is a rancher and a bucking bronco rider. After graduating, he plans to return to his family’s ranch and apply to police departments near his home or join the National Guard. Whichever path he chooses, he will pursue a rugged but worthwhile career.

McKay grew up on a ranch of more than a thousand acres, working with beef cattle, horses, dogs, sheep, and chickens. The ranch has been in his mother’s family for many years and is now run by his father. For the whole family, the work is never-ending. “I sometimes consider going back to school a vacation because sometimes the work gets so overwhelming,” said McKay. “But then once you’re back, you’re like, I’m missing the ranch life.” He spent a year at a Catholic school in Kansas but came back to Oregon to finish his degree because he wanted to be near the ranch, in spite of the hard work it demands.

“It was a really good place to grow up,” said McKay. “I didn’t think that at the time,” he added with a chuckle. As children, he and his siblings used to ride sheep and steers and rodeo animals, but in high school, they distanced themselves from the ranch a bit and got involved with athletics instead. As a high school senior, McKay was goaded back into the saddle: at a local rodeo, he let his friends convince him to get on a bucking bronco. “I was actually really scared at first to get on one,” McKay admitted, but the instant he did, he was “hooked,” he said. “The adrenaline rush…it’s fun. It’s just a lot of fun.”

Since his first ride, McKay has been going to rodeos and entering bronco-riding competitions whenever he can, mostly in the summer and sometimes on weekends during the school year. In five years, he has become an experienced bronco rider. “I had a record once. I’d gone on like nine horses and didn’t get bucked off,” he said. Being bucked is inevitable, though, and McKay has been thrown off at least 10 times.

Some of the horses McKay rides are wild, and others are perfectly tame. The trained broncos know to start bucking when they enter the “shoot,” the pen leading into the corral. “The animals actually like it, too,” McKay said. “Some do.”

McKay has recently been trying to improve his skills in saddle bronc, which is different from the ranch saddle bronc he usually rides. “In ranch saddle bronc you get to hold onto a rope and it’s your normal saddle,” he explained. Saddle bronc requires a special saddle. McKay practices on both trained and untrained horses between rodeos, but for now, his priority is his education.

McKay chose to major in criminal justice when he was a senior in high school. He had originally planned to study film, but “I got a call that I wanted to go into criminal justice and that’s what I did,” he said. He would like to be a sheriff or detective, although he is considering joining the National Guard after working on the ranch for a year or two.

As a bucking bronco rider and future police officer or soldier, McKay is a quintessential western American– but he was actually born in Haiti, not in the U.S. His parents adopted him and five other children, all of them within three years of the same age , from Haiti because they could not have children of their own. “It was pretty cool,” said McKay. Growing up on a ranch in Oregon, with parents who love and value them, has made an immense difference in the lives of McKay and his adopted siblings. “I just feel really blessed,” McKay said. “If my mom and dad wouldn’t have adopted any of us we would not be here and not have the life that we do, and God’s just really blessed me and my family.” As McKay enters the service of the police department or the National Guard, he will be sharing the blessings he has received with his country. His adventurousness has a God-given purpose extending far beyond the thrill of a bronco ride.