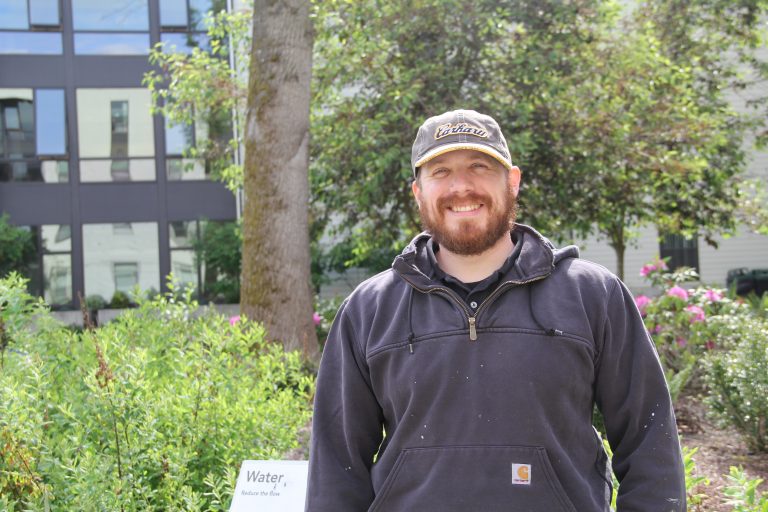 It is not unusual for a graduate of Western Oregon University to find his or her way back to campus in one form or another. Be it as a parent of a student, volunteer, or employee, WOU holds a special place in people’s hearts. Kellen Hendrickson ’05, this year’s Mario and Alma Pastega Award for Staff Excellence recipient, loves WOU so much that he followed the path of many before him and stayed on campus after graduation.

Although he earned a bachelor’s in history, Hendrickson did not go that route with his career. Rather, it was his student employment experiences on the paint crew for the Physical Plant that shaped his future and now he works on campus as a trades/maintenance worker. “I never in a million years thought I’d be working maintenance at the Physical Plant. But I am, and I like it. I’m happy it happened,” he said. Upon graduation he was offered a temporary position within the Physical Plant, which quickly transitioned into a permanent role. Now, nine years later, he’s running his own paint crew of students.

One of the students on his crew, Audrianna Straub, said, “There are a lot of characteristics that you hope for in a supervisor. You want them to be fair and respectful, honest and hard working, reasonable and excited about the job. Kellen Hendrickson exceeds these.” She added, “He puts an enormous amount of effort into the maintenance of our campus; continually striving to be proactive in improvements. He genuinely enjoys his job and this shows through the kindness and fun that he offers to those who work with him.”

When describing his work, Hendrickson said, “I pretty much do a little bit of everything.” This includes painting, electrical work, and repairing furniture. He primarily serves the residence halls and works regularly with students and families. He enjoys working with students and appreciates how they treat the crew. While he finds the staff friendly, it’s different when you go into someone’s home, he said of the residence halls. The students are laid-back and thankful for the quick response, which he is happy to provide as a former resident himself. “I can put myself in their shoes,” he said.

Hendrickson has been adding a personal touch when he goes into a student’s room to do a repair and they aren’t there. His boss trained him to leave a note for the resident to let them know their room had been entered and work had been done. Hendrickson began adding a little message to each note reading, “Have a great day.” He didn’t think much of it until one day he was doing a repair in a room where several students were chatting. A resident commented that she had received a note with that message on it and how it made her day. She didn’t know the man who left that note was the one working in the room at that moment. “Hearing things like that make it all worth it,” he said.

He sees himself staying in housing maintenance and sticking around WOU until retirement. After some calculation, he realized that if spent his entire career at WOU he would retire after being part of the campus for 50 years. Jokingly, he said, “I’m pretty sure they’ll have to name the school after me at that point.”