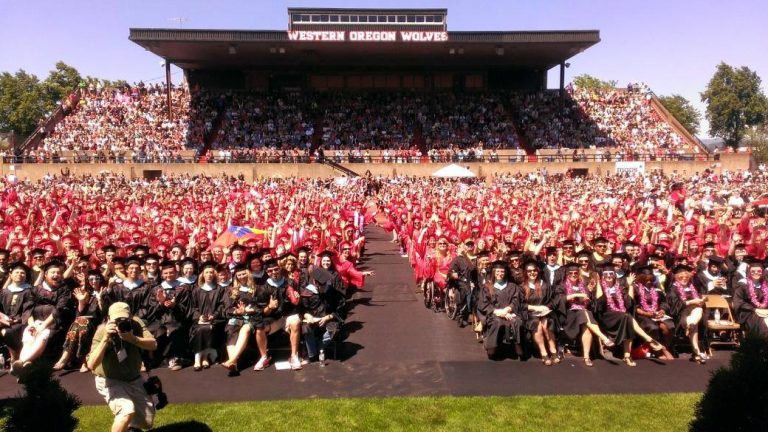 June 13 was a pretty hot day, for Oregon in June at least. More than a thousand graduates packed into the New Physical Education gym to line up for the processional of the largest Commencement in Western Oregon University’s history. The graduates had to be pretty warm in their robes, but you wouldn’t have guessed it by looking at them because the room was filled with big smiles and happy people.

Per Courtney’s usual style, his speech was a mix of jokes and serious messages. Early in his speech he joked about the age difference between himself and the graduates. “I don’t know what’s worse, to turn 72 on this coming Thursday – June 18. Or have the graduating class that you’ve been asked to give the Commencement speech to cheer when they hear you’re not going to be up here long.”

The theme of his speech was to not live life in fear. “Don’t be afraid. Don’t be like me.” He quoted advice his beloved grandmother gave him when he was young. “Worry and fear are like a rocking chair. They’ll give you something to do, but you don’t get anywhere.” He urged graduates to not be afraid to make a decision, to not fear losing – try again, and don’t fear starting at the bottom.

After the processional, distinguished student leaders Michelle Garibay and Joseph Hahn did the presentation of colors. Graduating seniors Rachel Ammons, Laura Killip and Erin Westfall performed the National Anthem with American Sign Language interpreting by Tedi Massey. The program kicked off with a welcome by President Mark Weiss, who took a moment to take a picture of the crowd for WOU’s social media channels. It was not only a day to say farewell to WOU’s graduates, but an opportunity to wish Weiss the best before his retirement on June 30.

Here are some demographics of our 158th graduating class:

Miss the ceremony? You can watch it in full on wouTV. Check out a Storify of social media posts from graduates, their loved ones and the faculty and staff of WOU – all pulled from posts using the official Commencement hashtag: #wougrad. There’s a great photo album on Facebook and a nice write-up by the Statesman Journal. Also, if you’re faculty or staff – check out the photos from the annual Faculty and Staff Recognition Breakfast.