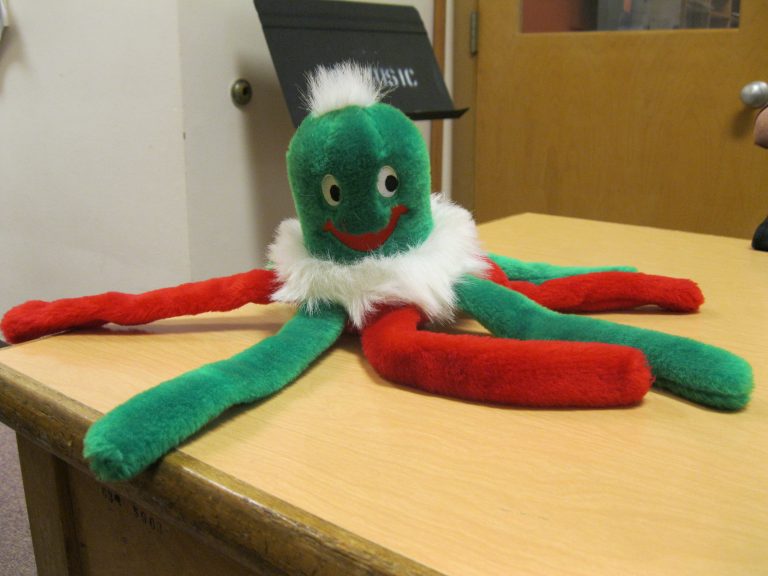 For the music history final he gave in December, Dr. Charles Mueller entertained his students by perching a furry, red and green octopus on the table in front of them. The octopus, Mueller explained, was given to him by a colleague while he was living in Florida and volunteering at an aquarium in Tampa. He has always been fascinated by marine life, and although his stuffed octopus might be just a squeaky dog toy, it gives him a rare opportunity to bring his passion for the sea and his passion for music history into the same classroom.

Normally, Mueller said, his interest in the coast has nothing to do with his musicology career – time spent at the beach is just a “nice diversion.” He does not have much time for diversions, but in the past he has volunteered at the Oregon Coast Aquarium in Newport as well as the aquarium in Tampa. He has also helped with Oregon beach restoration projects, an activity he hopes to resume.

In the meantime, he enjoys going to the Oregon Coast Aquarium’s educational “octopus encounters.” The octopus, he said, is his favorite animal. “It is super intelligent, it is reclusive and labors in solitude, it likes to feast on shellfish, etc. just like an academic.” Mueller was always drawn to the academic life of the octopus; as a boy, all he wanted to do was “be a scuba diver and hang out with the octopus.” He grew up not far from the central Oregon coast and loved to visit the beach and Newport’s Undersea Gardens.

In spite of his penchant for water, Mueller has never learned to swim. Instead, he visits aquariums and helps maintain the sea coasts he loves by volunteering. For him as for most people, though, his career comes first.

Mueller teaches the music history sequence at WOU. “I like to discuss music at a high level, and I love working with music majors because they usually have the same passion for music that I do,” he said, explaining why music history is his favorite class to teach. “[It] keeps me connected to European classical music.” Although his specialty is in popular music, classical is his “first love.” Teaching music history allows him to stay close to one of his passions, just as volunteering at the coast does.

Mueller realizes that striking a balance between pastimes and responsibilities is difficult not only for professors but also for students. “You often have no control over your schedule,” he said, when asked what advice he would offer to busy college students. “I would say just…maximize the time that you have one day at a time.”

Maximizing each day might mean taking the two-hour drive to Newport after class to pick up trash on the beach. It might mean putting off extra activities in order to focus on classes and homework. Or it might mean being content with just a memento of a hobby – like a stuffed animal octopus.