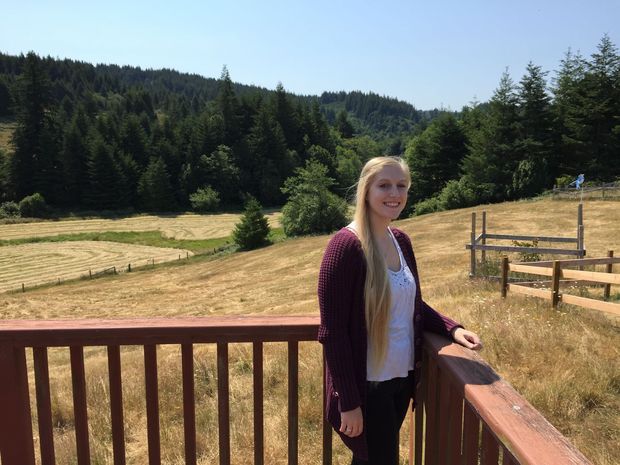 Story published in the Coquille Valley Courant
By Shelby Case

COQUILLE — A student at Western Oregon University is one of only 10 Oregon college youth chosen to attend the 100th anniversary meeting of the National Council for Geographic Education.

“I feel really blessed to have this opportunity,” said Taylor Ryan, 21. “I just feel really really lucky. I mean I have worked hard … especially being from such a small town I don’t feel people get chosen to do things like this.”

Ryan, who graduated from Coquille High School in 2011, will be among those to attend from Aug. 2-9.

The council is a group of teachers and pre-service educators who try to improve the teaching of geography.

The Center for Geography Education in Oregon selected her and others and she said they “will be examining the geography of Washington, D.C.”

“I kind of just applied on a whim,” Ryan said, adding that she applied in May. She’s also the youngest applicant.

The WOU student discussed part of the idea behind the program. Nationally so much focus has been on getting students skilled in math and reading. However, that meant they lacked in geographical knowledge. So for example, students should be able to read and analyze geography, “not just reading it and forgetting it.”

Ryan majors in early childhood/elementary education and will begin student teaching this fall at Ash Creek Elementary in Independence, which is next door to Monmouth, the home of Western.

“I just got my student teaching placement yesterday,” said the Coquille native on June 25.

She’ll work with third-graders at first. Then in the spring term, she’ll switch over and instruct either kindergarten, first or second grade but she’s not sure yet on that grade placement.

“She’s worked hard and she’s definitely earned it,” Domenighini said. “She’s just a hard-working kid. She’s a planner. She got that from me.”

Ryan’s stepfather, Rob, also reflected on the honor bestowed on the youth.

“It makes a person proud to know her,” he said. Rob said he’s only known her from her senior year in high school to the present. “I’ve not been around her when she’s been growing up.”

“She’s got kind of a subtle sense of humor I think. She’s intelligent and certainly self-motivated,” he said.

“I mean, to be completely honest it wasn’t a surprise that she was picked,” she said, explaining that this was because of Ryan’s volunteer experience and work ethic.

“She’s very deserving of it and I know that she’ll make the most of her time there,” Daquilanto said.

Ryan’s no stranger to Washington, having visited there the summer before her eighth grade year. While spending time in the nation’s capitol, she also visited New York City and Philadelphia.

This time around, she and the other Oregonians will gain graduate credits based on which museums they visit.

Participants each get $1,000, which goes toward flight and hotel costs. They keep their receipts for food and are reimbursed.

However, not all of the trip will be consumed by professional development. There’ll also be time for some relaxation.

“We have a couple of nights off and so I plan to visit some monuments,” Ryan noted.

She’s excited about her career choice.

“I loved my elementary school teachers,” she said. “I always had really good experiences.”

Providing even more career training experience, during her senior year at Coquille High, she volunteered at what was then known as Lincoln Elementary and what is now called Coquille Valley Elementary, collaborating closely with teacher Rebecca Jones.

Domenighini touched on this, saying “because of her volunteering, she was actually awarded the school to work scholarship her senior year and that was one she didn’t apply for either.”