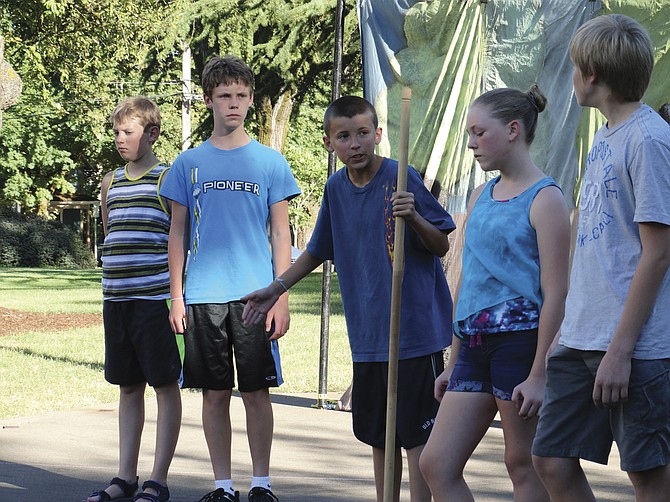 Story published in the Polk County Itemizer-Observer
By Emily Mentzer

MONMOUTH — As the sun dips below the tree line at Western Oregon University, shade creeps across the lawn at the outdoor amphitheater.

It’s still warm, but cooler there near the stage. Are you dreaming, or are fairies playing pranks on Athenians on stage?

No, it’s not a heat-induced vision, but Apple Box Theater’s production of “A Midsummer Night’s Dream,” by William Shakespeare, adapted for the young actors by Maren Anderson.

Fairies and mischief go hand in hand during this walk in the woods gone wrong.

Helena and Hermia are best friends — and have been forever — but are thrown into a jealous competition because “Everyone likes Hermia, so Helena is left out,” explained Delaney McCannell, 13, who plays Helena.

Rather than choose between death and the nunnery, Hermia and Lysander head into the woods to marry. Helena tells Demetrius, and they all head into Fairyland where the king and queen of fairies will play with their emotions to comedic ends.

“In the end, everything’s OK,” Delaney said. “Mine (Demetrius) has a love potion, so the rest of his life is a lie, but that’s OK.”

Delaney said she had to channel what Helena feels: anger, balanced with sadness.

“I just have to do it for the play, I guess,” she said about a scene where she has to hug Lysander.

Even with the evening shade, the sun has been baking the cement stage of the amphitheater all day, and the young actors feel the heat.

Shane Mickelson, 14, plays an actor in the production, and so ends up playing multiple roles.

As Francis Flute, he is part of a cast within a cast, putting on a special drama-turned-comedy production in honor of a royal wedding.

“At one point, I have to play a girl named Thisbe,” Shane said, which is the most challenging part of this play. “I have to act like something I’m not – a woman. I can’t really do a good girl’s voice because my voice cracks. The clothes you have to wear are scratchy.”

Playing Flute playing Thisbe, Shane said he started to feel a little empathy for women, especially in the old times, having to wear such scratchy dresses.

A young actress pipped up, “That’s what we like to wear!”

The normally three-hour play was shortened significantly and modernized for the young actors, said Anderson, an adjunct professor at WOU and local playwright.

“Shakespeare says everything five times,” she said. “I went through and could take out the three times that weren’t as good as the other two.”

While she kept the language in tact as much as possible — all the lines people will expect to hear were kept — other words were modernized.

When: 7 p.m. Thursday, Friday and Saturday.

Admission: Free. Bring a blanket or lawn chair and a picnic basket.

Of note: The production is made possible in part from a grant by the Polk County Cultural Coalition and sponsorship from Ash Creek Arts Center. It is completely volunteer run, for children aged 7 through 14.