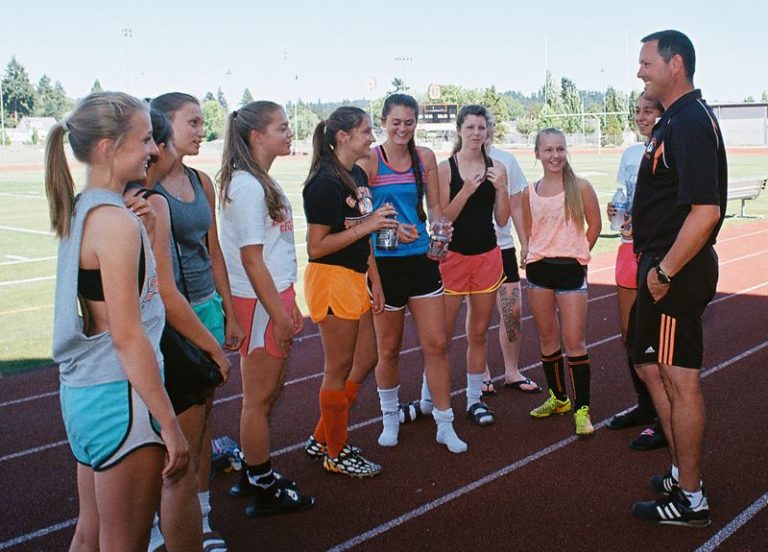 Story published in the Clackamas Review
By John Denny

Hess, 45, had assisted Thomas in coaching Gladstone’s girls soccer team since 2003, and he’s been the head boys track coach at Gladstone High School since 2010.

“This program is in good shape,” Hess said. “Steve did a tremendous job of building the program up over the years. We won seven league titles and three state championships in the 12 years that I was associated with Steve and the program.

“We’ve got 48 girls signed up to play this fall and we’ve got skilled club players who will be joining the program over the next several years. We’ve got six eighth graders playing club soccer with Thelo, and the same with our sixth and seventh graders.”

Hess acknowledged that it will be difficult to find athletes to fill the shoes vacated by four-year starters and two-year first-team all-conference players Mikaela Simac (defense) and Molly Webster (goalkeeper). But he said there’s no question the Gladiators will be competitive this fall.

“We’ve been playing six-side against 6A schools in Gresham and we’ve held our own,” Hess said. “With the exception of Centennial, which has been dominating everyone, we’ve beaten or tied every team.”

Hess added, “We pass the ball really well. We control the ball and make good runs. But we still have some work to do on defense.”

Hess said that Kristi Straw, a health teacher at Gladstone High School, is his varsity assistant.

Hess, who works in retail at Adidas, is a 1988 graduate of Canby High School, where he played soccer and competed in the pole vault in track and field. He played forward and midfielder on a Canby soccer team that placed second in league.

At one time he held school pole vault records at Canby High School (13-9), Clackamas Community College (15-8) and at Western Oregon University (16-2-1/2). His personal record in the pole vault is 17 feet.

Hess earned All-American honors in the pole vault at Western Oregon, placing fourth at the NAIA National Championships. He graduated from Western Oregon in 1994, earning a bachelor of science degree in the social sciences.

Before joining the girls soccer coaching staff at Gladstone, Hess coached girls soccer for seven seasons at Canby High School (1996-2002), serving as head coach three seasons and taking the Cougars to the state playoffs twice. He was an assistant track and field coach at Canby for 15 seasons (1995-2009), coaching pole vaulters and hurdlers.

Hess, his coaching staff and players will be hosting a camp for incoming third through eighth grade girls at Kraxberger Middle School from 3 to 4:45 p.m. Monday through Thursday, Aug. 10-13. The registration fee is $40. Sign ups are through Gladstone Community School.