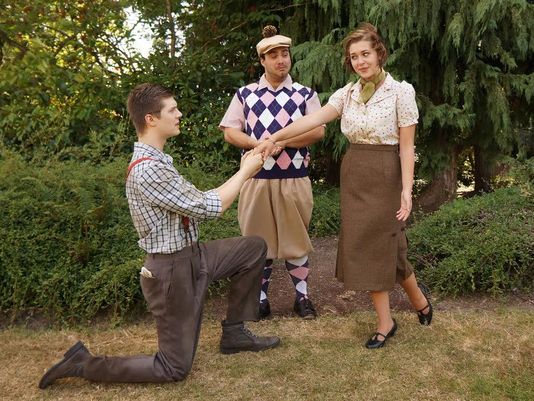 Published in the Statesman Journal
By Tom Mayhall Rastrelli

Are you a purist, who prefers a traditional Elizabethan presentation of the Bard’s masterpieces, or do you like productions that mix things up by setting them in different time periods or outrageous settings?

If you prefer your Shakespeare shaken not stirred, you’re in luck. In the coming weeks, two Mid-Valley theater companies will mount outdoor productions of Shakespeare that are nontraditional.

Keizer Homegrown Theatre will set “A Midsummer Night’s Dream” in contemporary times with hipster lovers, bubble-blowing baby fairies and a fairy king on a motorcycle.

Valley Shakespeare Company, a new company founded by Western Oregon University Department of Theatre and Dance, will perform “As You Like It” set in the American Dust Bowl.

Whether you’re excited, confused or insulted by these productions’ changes, their directors have something to say about their decisions and the never-ending trend to switch up Shakespeare.

Twenty years ago, Linda Baker, director of “Midsummer,” was watching a traditional production of the classic comedy in Shakespeare’s birthplace, Stratford-upon-Avon.

“When the curtain went up, I realized I didn’t care anymore because I’d seen it so many times,” Baker said. “It didn’t resonate with me. I didn’t listen.”

She’s been reinventing Shakespeare since. She even set “Romeo and Juliet” in outer space. A nontraditional cast allows the audience to hear the play with different ears, Baker said.

David Janoviak, director of “As You Like It,” explained the trend.

“We reset the plays in modern settings to make them more relatable to our audiences, following the belief that Shakespeare’s themes are timeless,” Janoviak said.

There also are practical and financial reasons.

“Traditional Elizabethan garb is expensive and time consuming to do well. You need a big costume crew, and these shows need to be built from scratch because you can’t pull Elizabethan garb from a rack at Target,” he said.

Inside the current production’s changes

So, what’s the reasoning behind the current productions’ changes?

Janoviak set “As You Like It” in the American Dust Bowl rather than France because it serves the story well. The comedic plot follows Rosalind, the daughter of a banished duke, who falls in love with Orlando, the disinherited son of one of the duke’s friends. When she is banished from the court, Rosalind takes on the appearance of a boy and embarks on a rollicking adventure.

“The (banished) duke says in his first speech, ‘Sweet are the uses of adversity,’ ” Janoviak said. “Modern audiences don’t know what it means to be exiled, to have lost everything and been forced to relocate … The closest thing in American history is the Dust Bowl … It’s a fitting backdrop.”

“A Midsummer Night’s Dream” is the comedic tale of young lovers and a band of actors who become pawns in a feud between the king and queen of the fairies in ancient Greece. Baker thought setting the play in contemporary times and reversing the generational difference between the lovers and the king and queen would be hysterical and add a new dimension to the language.

Baker intended to cast baby boomers as the lovers and youth as the royals and parents but was unable to get enough elders to audition. Instead, she only reversed the age of Puck, the mischievous sprite who does the fairy king’s bidding. Puck will be a crotchety old fellow who uses a walker.

“The show has been a really good time, and the audience will experience it that way, too,” Baker said.

Thinking outside the theater

Both productions will be outdoors. If you’re wondering why outdoor Shakespearean productions are popular, the answer is simple. The Globe Theatre, where Shakespeare was originally performed, is an outdoor theater.

“It’s heightened language that was written to be spoken in large outdoor spaces,” Janoviak said. “That festival, outdoor environment, it wants to be there. It plays better there.”

See a story about the production by the Polk County Itemizer-Observer.