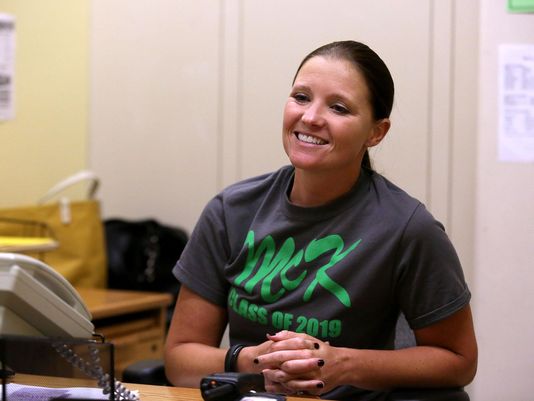 Published in the Statesman Journal
By Joce Johnson

All eyes were on teacher Ricardo Larios as he read from a list of difficult vocabulary words to a class of roughly 30 incoming freshmen Tuesday at McKay High School.

Several raised their hands when Larios asked for the pronunciation and definition of each word. Most laughed when he joked about not being able to pronounce “anonymity.”

Whether they were volunteering answers or giggling about incorrect definitions, the students were engaged, and that was exactly the goal for the Summer Transition Program, started in Salem-Keizer Public Schools in 2011.

The program has since launched at three high schools, including McNary and North Salem High School, but began at McKay with the High School Graduation Initiative grant, said Jessica Rien, a behavior specialist and head of McKay’s summer program.

Across the district, more than 2,200 students have participated in the program during the last five summers. About 1,000 have been involved at McKay alone. What the district found was that students who enrolled in the program generally had better attendance, earned more credits and obtained a higher GPA during their freshman year. While it was targeted toward students who struggled academically or socially during middle school, the program was open to everyone and offers free breakfast and lunch to all students.

“We don’t want that stigma with it,” Rien said.

She cited research that suggests at-risk students are less likely to drop out when they are supported during their transition between middle school and high school — and she observed it herself.

Eight teachers from McKay and its feeder middle schools were involved in the program. But a number of support staff, McKay High School student volunteers and students from the Western Oregon University Scholar program assisted in daily operations.

In terms of the format of the five-week program, the students take four classes a day, including math, reading, writing and College and Career Ready, with breaks in between. The breaks were spent in the hallway, while students listened for their names to be called in raffles offering prizes like glow sticks and candy. It gave them a feel for what the hallways will be like during passing time in high school.

“You have to find ways to engage them and keep them here,” Rien said.

In Elizabeth Bristol’s math class, the students played bingo. She gave them the answers to several math equations and they filled in their blank Bingo boards. While it may seem like a light lesson, Rien said 73 percent of students who completed a Summer Transition Program passed Algebra 1 the first semester of their ninth grade year.

Jessica Zamarron, a recent McKay graduate and current student in the WOU scholar program, has helped run the summer transition program. She said she has enjoyed making connections with the students and learning about their backgrounds. She has also learned about what it takes to be a teacher.

“I’ve learned you need to prepare a lot,” Zamarron said.

The combined writing classes met in the computer lab Thursday, where students worked diligently to complete an essay. Alejandra Cuesta and Jaziah Lucas, who will both be McKay freshmen next year, worked quietly on their own.

The Summer Transition Program has made them more excited to go to high school.

Lucas said College and Career Ready has been his favorite class this summer. It has taught him goals, hopes and the importance of school.

“I get to know the school more. It’s cool,” Cuesta said. “I like every class (and) learning about other people and how they pass their obstacles.”

The last day of the Summer Transition Program at McKay is Thursday, July 23.