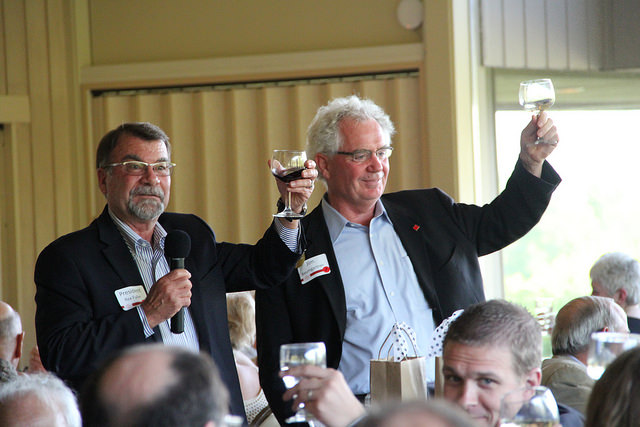 Those who financially support Western Oregon University through gifts make an immeasurable impact on campus. Their generosity supports our students, programs and the physical campus itself. Each year, a dinner is held to thank and honor the donors who are members of the President’s Club. This exclusive group consists of donors who gave $1,000 or more to WOU the previous fiscal year. This year’s dinner was held on a sunny Friday, July 10 at Illahe Hills Country Club. Lovely music was provided by students Erin Westfall ’15 and Kade Bush.

The celebration was punctuated by the significant governance changes of a new president and board of trustees that WOU had undergone the week before. Both WOU’s new president, Dr. Rex Fuller, and chair of the board, Jim Baumgartner, attended the event and took the opportunity to get to know WOU’s most committed donors. Board members Ivan Hurtado and Marshall Guthrie also attended the dinner.

“Knowing that one of my first events as president would be to thank our most distinguished and generous donors, is exciting for me and is an indicator of the state of public higher education in Oregon and the nation,” Fuller said. “I am grateful that 10 days into my presidency, I am able to say to each of you a huge and heartfelt thank you for your generosity and support of WOU and our students. Without such support, many students would not be able to pursue their educational goals and dreams.”

In addition to Fuller, toasts were given by Baumgartner, recent graduates Kylie Roth ’15 and Eli Zachary ’15 and Tommy Love, executive director of the WOU Foundation. Recognition was given to donors who reached important milestones. Three organizations joined the esteemed ranks of benefactors (cumulative lifetime giving of $100,000 or more): Maps Community Foundation, Fred W. Fields Fund of the Oregon Community Foundation, and the Woodcock Muñoz Foundation. Several people met the milestone of a 10-year consecutive membership to the President’s Club: Charles and Sylvia Alva, Tina Fuchs and Julia Heilman ’94, John and Betsy Messer, Tom and Carly Neal, and Victor and Kathleen Savicki. To see the full list of recognitions, view the event’s program.

Also, take a moment to look through pictures from the event.