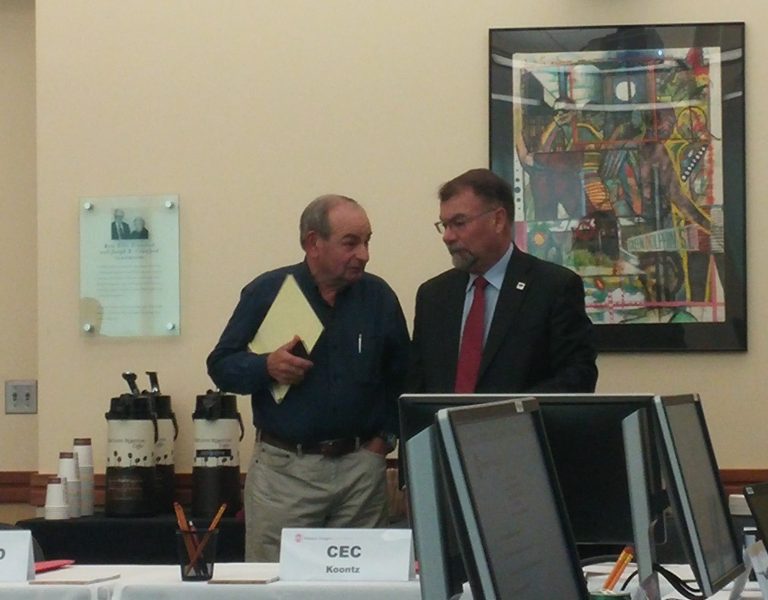 MONMOUTH, Ore. – The inaugural Western Oregon University (WOU) Board of Trustees held its first meeting since taking on governance responsibility for the university on Wednesday, July 22. The board began by welcoming new President Rex Fuller.  Both Fuller and the board began their roles on July 1. This historic event is the culmination of a year-long planning process that established the board.

The board approved repairing major electrical wiring at a cost from the general fund of approximately $500,000, and adopted the university’s mission statement (see below). Fuller commented of the former that it’s an “opportunity to invest in a one-time cost while maintaining a healthy reserve.” The board also heard presentations from its committee chairs as well as several campus administrators, faculty and staff on topics such as student success, finance and administration, and governance.

Fuller was among those presenters. He discussed his first three weeks in office, and set forth his vision for WOU’s future, detailing the important role it will play for students and the state of Oregon. “It’s the personal touch that sets Western apart from other schools in the country,” he said, adding that it’s imperative that the campus moves forward thinking about how to build legacies and fulfill dreams. He said a critical piece of that is keeping WOU affordable for students.

“The inaugural meeting of the board in its official capacity was exciting and meaningful. I am pleased with the board’s leadership and the interaction committee chairs have had with university leadership,” Fuller said. “Todays’ meeting established a very positive working relationship that will help the university move forward.”

“The board is committed to Western’s students and to the long term success of the university,” said Jim Baumgartner, chair of the board. “We have organized a system of shared governance that will serve the university well. I am pleased with the dedication demonstrated by the board’s trustees and by their commitment to make timely important decisions in support of Western.”

The statement includes three core themes, which can be found online.