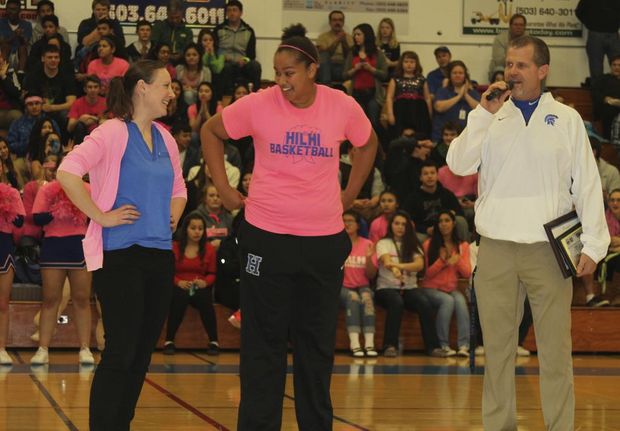 Story published in the Oregonian
By Jeff Smith

Hillsboro High School athletic director Steve Drake arrived at the school as a coach in 1984 and was promoted to his current position in 1997.

Drake, 57, said the success of his athletic programs over the past couple of years has rejuvenated him and he can’t wait to see the continued growth of the Spartans in the years to come.

Drake acknowledges that a considerable part of Hillsboro’s success in the 2014-15 school year was the Spartans’ move back to Class 5A from Class 6A. More important than wins and losses, though, Drake said the move to Class 5A has helped provide a “competitive culture” among all of his teams.

Drake was particularly proud to see the overall participation numbers in athletics at the school increase from 623 in the 2013-14 school year to 693 in the 2014-15 school year.

Drake recently reflected on the past school year and his vision for the future in a question-and-answer session with The Oregonian/OregonLive:

We were really excited about the opportunity. We were fortunate to have a good run at the 6A level in 2013-14, particularly with the continued success of our wrestling program and our football program’s turnaround around Coach (Adam) Reese. Obviously, we had success with boys and girls soccer at the 6A level. Girls basketball made it to the Sweet 16 at the 6A level and then wrestling finishing third in state at the 6A level. Baseball team making it to the semifinals. We had a lot of momentum with some successes going from 6A to the 5A level. We had already changed that culture of our kids having the belief that we can be successful. The main thing in athletics is being able to change the culture of, ‘Can we win?’ to ‘We expect to win.’ I think that started our last year in 6A and then obviously last year moving into 5A our kids were extremely competitive.

On the success at the Class 5A level last season:

Football was very successful, girls soccer making it to the semis, boys soccer making it to the quarterfinals. Cross country making it to state, our volleyball team winning a match and finishing fifth. That was huge and it carried on into winter season. Wrestling finishing second in state and girls basketball finishing second in league and making it to the quarterfinals. Boys basketball finishing fifth and making it to the first round of the play-in model. Great spring with girls track winning the league and finishing second in state, softball getting to the quarterfinals for the first time since 1980. You can see it’s not just certain sports where we’re successful. It’s the combination of building that culture. Our kids now believe we’re going to win and it’s spread into all of our programs. That’s really exited to see. It’s changing the culture. It starts with the coaches. We’re going to win and be competitive but not win at all costs. We’re going to win the right way. What really sets the tone for your whole school year is the fall sports. When your fall sports are successful, it snowballs and that’s what happens with us. We had a very successful with volleyball, both soccer teams and the football team. Kids out there that maybe didn’t want to play now all of a sudden they want to get involved.

On the negative impact of losing seasons:

When you’re not successful, kids that could really support or have a good experience, they don’t want to go out there if they don’t have a chance to be successful. I think there were a lot of kids that could have and maybe should have gone out for athletics in the past that unfortunately didn’t. Kids want to participate in something that makes them feel good and something where they have a chance to be successful. The whole vibe at the school has changed for the better. There’s more school spirit at our assemblies, more kids coming to our contests. Everybody wants to get involved in some type of manner. It’s that whole school culture. It’s feeling good about your school and it expands into everything, not just into athletics but in the whole school

On the impact of the Class 5A move:

It was huge for our school. From 2006-2010 when were in Class 5A, we were state champions in football and soccer. We’re right on that brink. Are we a 5A school or a 6A school? I know there are a lot of people that question whether we should have six classifications. I think it allows schools being able to compete against equal schools with equal size numbers and you’re competing against schools that are common in nature. The 5A has been just the perfect fit for Hillsboro. I don’t say that because of the success but about giving kids the opportunity to be successful and not just, ‘Oh here we go again.’

On the city rivalry with Liberty:

Back in the 1980s and 90s, Glencoe was the big rival. Then when Century opened, because of the proximity, that was a huge rivalry because they were our neighbors. Now with the classification changes, the rivalry game is now definitely that Liberty game. Our kids want to be the best Hillsboro school in Hillsboro. I always tell our kids there’s only one school with the city name and that’s us and we have to take pride in that.

On the Northwest Oregon Conference:

It’s a different NWOC than we were in 2010 with different schools. It was a whole new feel. But now that we have had an opportunity to go through the league for one more year, we have developed new rivalries within our league. Hillsboro and Sandy in wrestling, Hillsboro and La Salle in girls basketball are some examples. I personally have always said I’d rather travel to be competitive than take the proximity of closeness of schools and not have competitive games. From a competitive standpoint, obviously it was very good for our schools. The thing I don’t like is that when we travel, our kids don’t get the opportunity to be able to support our teams on the road as often. From a league standpoint, that’s a drawback. Not having the opportunity for kids bing able to go support your fellow students compete at Sandy. The transportation costs for Glencoe and Century are much less than Hillsboro and Liberty. The school district gives us a proportion of budget to be able to accommodate the travel.

On the changing logistics as an athletic director in the NWOC:

There is an extreme amount of pressure. It is a hardship on our kids in a couple ways. No. 1, we’re losing classroom time with our kids to travel earlier. The second is I’m going to make sure I accommodate enough travel time and will give a half-hour or so extra just to incorporate potential travel issues that may arise. It’s especially challenging in spring sports with the weather because the weather is drastically different on the west side and east side of the metro area. I always stay on the conservative side. There’s that cautious mindset as an athletic director in the NWOC. It was a lot of change last season. Working with new athletic directors, figuring out travel times, venues and schedules. Making sure we communicate all of the possible changes. The Standard Operating Procedures for our coaches was different.

We’ve had that opportunity now to compete against these new schools, we’re excited about the successes and I think our coaches are really excited about this year because now they have a better idea of what to expect. There’s just a lot more comfort for our parents, coaches and kids now. It’s the opportunity to get out of your box and encounter new schools, cities and athletes that you’ve never seen. From a school perspective and an athletic perspective, it’s been really positive.

On the 4-year time block of the OSAA’s current alignment:

We’ve developed that cultural change, and if the numbers dictate it after four years and the OSAA keeps six classifications and we go into Class 6A, that’d be fine with us. Whatever league they put us in at the end of the four-year block, we expect to be competitive and we will be competitive. And if we’re in the Metro League, then we’ll go into the Metro League and be competitive and do the best we can. We’re not going to offer any excuses and say that isn’t fair. Whatever the OSAA decides, we’ll accept it and move forward. I really feel like, and this is my personal belie, I’m hopeful that we keep six classifications. Coach Reese’s mindset and all of our coaches mindset, is we’ll go where we’re assigned and we’ll go and compete and do that wholeheartedly. I experienced it so I get it whole-heartedly. At Springfield High School, I played on a 2-7 football team, then I went to (what is now Western Oregon University) and they had won five straight league championships. We won that first game and I was like, ‘Wow, this is great,’ and guys are like, ‘This is what we do here. We win.’ You develop that swagger and mindset. Once you get that mindset that you expect to win, you have to fight hard so you don’t lose that. Because we’ve seen it change and it’s not fun.

It was frustrating to watch kids go out and accept losing and accept the fact that they weren’t able to compete in contests. I evaluate successful programs by how kids compete. It’s going out and watching kids doing everything they can to be competitive and for the right way. And when kids go out there and just give up, that’s when you know you need a cultural change.

On the future of the Hillsboro High School boundary lines:

Hillsboro High School’s boundary changed with potential growth in the South Hillsboro area. We have to be able to build new elementary and middle schools and there’s talk of a fifth Hillsboro high school down the line. The South Hillsboro Project is not going to go away, and the district is being proactive that there are schools in place to accommodate the new homes that will go in that area. From our perspective Hillsboro High School and Century High School are going to spike with enrollment numbers. You can see all the development by just driving around Hillsboro. When I got here in 1984, I’d drive down Cornelius Pass and it was just fields. Now I look at it and the fields are gone. It’s a change, but it’s an exciting change.

I’m going to be starting my 35th year in teaching and athletics and coaching. I enjoy what I’m doing. I had such a great experience as an athlete and what coaches did for my life is why I’m doing this job now. It’s a pay-it-forward type thing and I enjoy it too much. I just love it too much to leave. The 5A move has definitely given our school a post. I’ve experienced the good times and the not so good times. To see the morale of our school and all of the pride that we have back in our school it puts a smile on our face. Hillsboro is back to where it should be and it’s really really cool to see. You’re never making everyone happy but certainly when you’re successful it limits the negativity and complaints. When I see the teams having success and being happy, it makes it all worth it. I want to be known as a great athletics school and that’s always been my charge. I just feel so good about where Hilhi is right now, and I say that for all of our programs. I’m extremely proud of this place and it gives me great pride to know that we’re back. That last year just regenerated my engine again. I can’t wait for our football opener on Sept. 4 against Liberty.