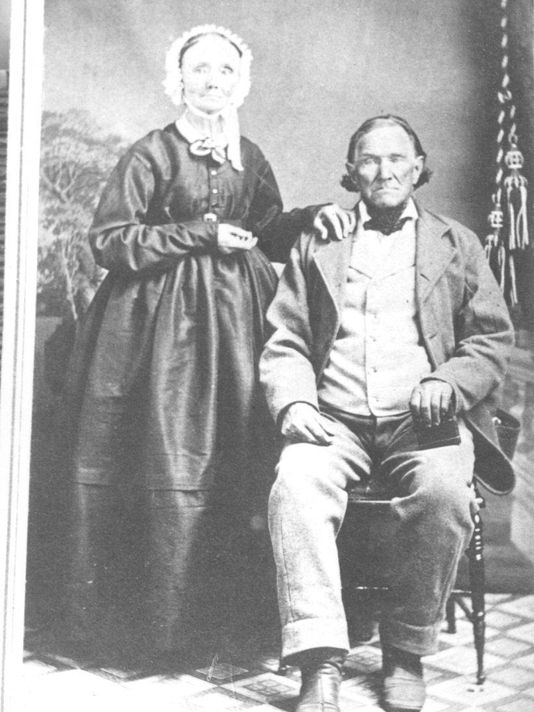 Story published in the Statesman Journal
By Capi Lynn

From our archives. This story originally was published as part of our Headstones of History series from mid-2002 to early 2007.

Nathaniel Ford was a surveyor, schoolteacher, flatboatman and sheriff before emigrating to Oregon.

The resourceful pioneer then added postmaster and state legislator to his résumé after settling in Polk County.

But he is perhaps most remembered for being a slaveholder.

Ford is buried in a secluded cemetery on private farmland a mile southwest of Rickreall.

Jim Musgrave stumbled upon the site, hidden among an oak grove, more than three decades ago when he was a student at what then was the Oregon College of Education in Monmouth.

Musgrave wrote his senior paper about “The Negro in Oregon Before Statehood,” devoting several pages to Ford.

“He was the last person to legally own slaves in Oregon,” Musgrave said.

Nathaniel Ford settled in Rickreall in 1845. At that time, it was called Dixie because of the Southern sentiment in the community.

Historical accounts state that Ford and his family brought a slave couple and their children along on the journey from Missouri to Oregon.

Some accounts indicate Ford promised the couple freedom upon arrival. Others suggest that they begged Ford to bring them along and that no such promise was made.

The controversy ultimately had to be settled in court — Robin Holmes vs. Nathaniel Ford — with the slave couple eventually gaining custody of their children.

In the meantime, Ford treated Holmes and his family well. He built Robin and his wife, Polly, their own quarters and let them sell the produce they grew on his land.

Names of the Holmes children were recorded in the Ford family Bible. A framed copy of one page hangs today in the Polk County Museum. The museum also has an exhibit on Ford with photographs, documents and artifacts.

A copy of the wagon train manifest notes that Ford’s company contained 358 persons. That comprised 55 married men with wives, 80 single men and 168 children. It also notes the company had 54 wagons, 500 cattle, 60 horses and 28 mules.

Inside a glass case in the exhibit are kitchen items that belonged to his wife, Lucinda — a rolling pin, large wooden bowl and woven basket.

Nathaniel and Lucinda had two sons and eight daughters. Four of the children died before they came to Oregon.

The Fords settled on the shady banks of Rickreall Creek, with Nathaniel paying a squatter’s right of $25. He built a log cabin to get them by, then a few years later built what was believed to be the first frame house north of California.

Ford helped start the first school in Polk County, was the first postmaster in Rickreall and served several terms in the state legislature.

“I think he is one of the most important men in Polk County history,” local historian Arlie Holt said.

Ford offered the use of one of the rooms in his log cabin for the county’s first school.

Years later, a great-granddaughter passed along stories about the post office to a reporter with the Oregon Journal. She said someone on horseback would deliver mail to the Ford house every two weeks.

Ford worked primarily as a surveyor in Oregon. He helped incoming pioneers locate land claims and was called upon to settle disputes. He also helped Jesse Applegate in surveying for the Applegate Trail.

Musgrave, in researching his senior paper in college, discovered that Ford and another man once had difficulty surveying a portion of the Oregon-Idaho border.

“As the story goes, they got so drunk that by the time they reached the Idaho border, they were six miles off,” he said.

Aside from that, Ford made many contributions to the history of Polk County and Oregon. He just happens to be most famous for bringing slaves to the state and getting embroiled in a lawsuit.

We’re taking a tour of some of the historic cemeteries in Marion and Polk counties. See this story at StatesmanJournal.com/headstones for videos and photo galleries.