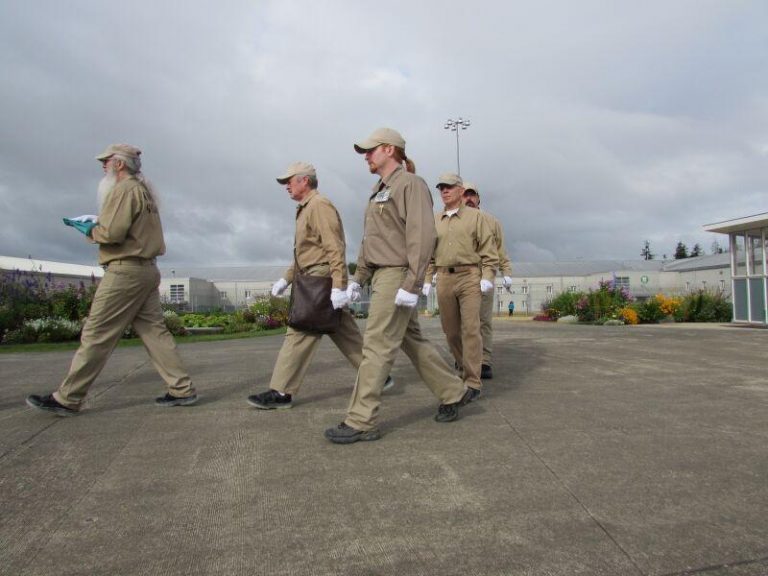 Every morning the flags at Stafford Creek Corrections Center in Aberdeen, Washington, are raised in a color guard ceremony.

The 10 men who do the job are inmates and veterans.

The ceremony ends with a salute, although the solemnity and reverence can seem strange in this setting.

The color guard, still in formation, walks along the concertina wire past the guard shack back to their housing unit, which they call their pod.

Washington is among a handful of states that have started such programs to house incarcerated veterans together.

Correctional unit supervisor Tera McElravy said the two-year-old program doesn’t aim to recreate the military. Rather it enables the state Department of Corrections to use the inmates’ shared life experiences to help with rehabilitation and transition.

“We want to recapture that positive stuff that they learned in the military and them have them apply it to civilian life,” McElravy said.

The 90 or so men move about their unit freely. The walls are painted with armed forces insignia and flags.

The program is attractive to prison officials largely because it doesn’t cost extra money. Inmates with non-violent behavior while in prison are eligible; they work with the State Department of Veterans Affairs to sign up for VA benefits, services and job training.

Inmate Michael Kent began serving time for robbery in 2011 and came to the vets pod a year and a half ago.

“When I came to the pod, people greeted me. I was like, ‘Whoa, something is different here,’” Kent said. A common background helped to foster a sense of responsibility.

At Kent’s feet was Snickers, a chocolate-colored dog, whose tail beats a steady thump on the tile floor. Kent is training Snickers as a service dog for a wounded veteran. It’s one of a few community service programs inmates can participate in.

There are skeptics who question the effectiveness of inmate-veteran programs in Oregon, Florida and Colorado.

Among them is William Brown, a criminal justice professor at Western Oregon University. He’s also a veteran.

Brown said it makes sense that housing veterans together works well in prison. He said they’re used to participating in what’s known as a total institution – or a closed, formally structured way of living.

Brown said the test of a program’s success depends on what happens after the inmates are released. “Eventually you’re going to have to put them into the civilian culture. How are they going to navigate there?”

Even within this prison, inmates who are veterans face special challenges. Kent has experienced pushback from guards who were in the military. He has been called out by fellow Army Rangers while working out at the prison gym and jeered while serving on the color guard.

“It’s almost like, ‘What right do you think you have to touch the flag? You broke the law. You let people down,’” Kent said.

That’s something he and others in this unit know they will need to deal with on the outside. Not only being an ex-con, but being perceived as a failed veteran.

“That may be true, but that doesn’t mean that we can’t find it within ourselves to redeem that – to reach back,” Kent said.

So far eight offenders have been released from the veterans’ pods in Washington. One is back in prison.

McElravy, the unit supervisor, said the program is a work in progress, but so far the results have been positive, and the state plans to expand it – to accommodate more of the approximately 1,500 Washington state inmates who once served in the armed forces.