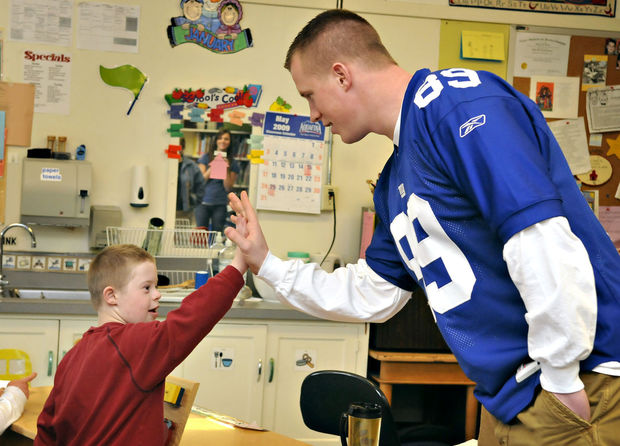 Story published in the Corvallis Gazette-Times
By Jesse Sowa

Kevin Boss felt burned out as he reached the end of his freshman football season at Philomath High.

He was battling injuries and decided to skip basketball. In his newly found downtime he got introduced to the weight room by PHS coaches Troy Muir and Chris Sexton.

“I was able to make some changes,” he said. “I got stronger. I lifted a lot. It just took off from there.”

Boss, a 2002 PHS grad, went from a young man who didn’t know much about weights to a college basketball and football player at Western Oregon who talked a coach into getting him a key for the weight room.

Looking back, Boss credits his weight work for helping him reach the levels of athletic success he did. He went on to win a Super Bowl with the New York Giants during his rookie season in 2008. His NFL career as a tight end stretched five-plus seasons.

An interest in weight training led him down a career path.

For the past year he’s been the director of strength and conditioning at Bend Hoops Academy, a business inside which he also runs Boss Sports Performance.

A 31-year-old certified personal trainer and self-proclaimed fitness and nutrition geek, he works with high school and middle school students throughout the year and trains college athletes in the summer. His goal is to eventually work with post-collegiate football players training for the NFL Combine.

NFL training camps have gotten underway and there’s no love lost with Boss for this time of year.

“I don’t miss training camp in the least bit. It was an absolute grind,” he said, remembering the stress of that period every season, being away from his family and friends while trying to make a team.

What Boss does miss are the friendships through the sport he’s made along the way. Particularly with the Giants, where he spent four seasons.

Boss’ job combines basketball — the sport he considers his “first love” — and personal training, for which he developed a passion.

“It’s been great. I love it,” he said. “I love working with the youth. It’s been a great post-football career move for me.”

Bend’s surroundings lead to Boss working with athletes in a number of sports. The typical ball sports are included, plus skiing and lacrosse.

Boss says his love of the job is seeing young people who might not be very interested in the program when they start but make progress and gain confidence by the time they’re done.

His full-time job has taken away from his high school coaching opportunities. In recent years he’s spent time with the football and boys basketball programs at Summit in Bend. He plans to continue pursuing volunteer opportunities there.

Boss and wife Bree have two boys — Zeke, who will turn 3 later this month, and Houck, who turned 1 in June — and are expecting a baby girl in early November.

They settled in Bend about two years ago and found a new home.

“I think we will be here for life,” he said.

Also, check out another recent story about Boss from NJ.com.