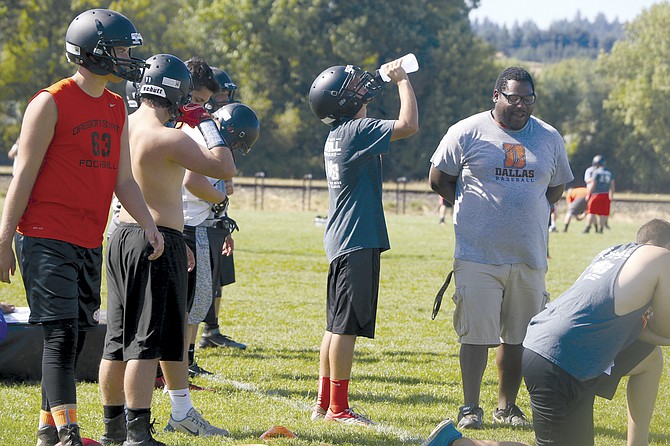 Story published in the Polk County Itemizer-Observer
By Lukas Eggen

POLK COUNTY — The fall sports season officially kicked off on Monday. As players and coaches gathered to prepare, they were greeted by an unwelcome, and dangerous, guest — the heat.

Temperatures reached into the 90s on Monday and Tuesday and a heat advisory went into effect on Tuesday through Wednesday (today) until 6 p.m.

For Central cross-country coach Eli Cirino, beating the heat means runners are up early each morning for practice to avoid the peak temperatures.

“Most of the summer, we run at 9 a.m.,” Cirino said. “The heat scares the heck out of me, especially when kids are running different routes and I can’t keep track of them all at the same time.”

For runners, whose workouts include going on distance runs, Cirino ensures his runners are aware of the temperature and how hard they should be pushing themselves in the heat.

“We dictate the pace as it heats up,” Cirino said. “We use the standard of going about 30 seconds per mile slower for every 5 degrees. So, if you’re running a 7-minute mile and its 80 degrees, if it reaches 90 degrees, you should be running an 8-minute mile.”

Other measures taken include planning out routes closer to Central’s campus and having ice water stations that runners are required to stop at, as well as monitoring heart rate and increased recovery time during workouts.

“We try and make it fun, let the kids run through the sprinklers or have more cold water stations,” Cirino said. “If you cool off in between reps, you can almost make the heat irrelevant.”

For football, which requires players wear protective gear, the OSAA requires coaches ease the players into a new season.

“Part of the rules has to do with getting the kids acclimated to the heat,” Dallas football coach Tracy Jackson said. “(On Monday) and Tuesday, we practiced with helmets only. Today, they’ll have shoulder pads on and Thursday we can go full pads.”

The heat is affecting practices at the collegiate level as well. Western Oregon women’s soccer coach Steve Ancheta said excessive heat means every practice is run as efficiently and safely as possible.

“You have to control your practices,” Ancheta said. “We really shorten our training parts down to 10 minutes, have more water breaks and days that we do double workouts, maybe your practice isn’t as long. You have to be careful and not slow things down, but have high intensity in shorter periods of time, and you can still get a lot out of them.”

Aside from keeping a close eye on athletes during practices, coaches at all levels are also hoping to teach their athletes to make healthy choices when it comes to food and drinks.

“Caffeine is a no-no for athletes right now,” Jackson said. “Caffeine dehydrates you, and that can be dangerous with this heat.”

Encouraging their athletes to get rest and stay hydrated are also important keys to being able to practice in the summer heat.

“I tell my kids they have to hydrate throughout the day and not try to tank up at the last minute,” Cirino said. “They have to take care of themselves, including eating and drinking well. Eating well might not be that big of a deal when its 70 degrees and you are hydrated. At 90 degrees, that’s going to show up real well. This is a good opportunity to educate hem on the little things.”

As Polk County athletes begin their 2015 campaigns, the first opponent they are facing isn’t anther school — it’s the heat.

“You make sure you’re taking care of them and that they feel safe,” Jackson said. “That’s what we can offer as coaches.”