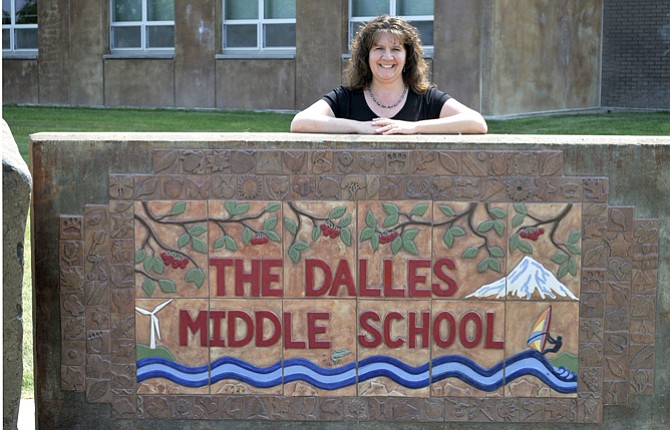 Story published in The Dalles Chronicle
By Derek Wiley

As principal, Sandy Harris led Obsidian Middle School in Redmond to the highest rating (Level 5) a school can get for academic growth for three consecutive years.

Now the new principal of The Dalles Middle School is ready to do the same thing here.

“It’s always about growth,” Harris said. “It’s not always about going over the benchmark but how far we’re growing and each year we grow is that much closer to that benchmark. I really believe in building a climate and culture both with staff and parents to help students be successful.”

In Redmond, where Harris was the vice principal for three years and the principal for four, Obsidian created intervention classes to help students either catch up or get ahead. Thanks to a grant, the school was also able to start an after-school program.

“Students learn at different rates,” Harris said. “Some students needed more time with reading and more time at math. We were able to designate the time it took for students to grow in their academics.”

Harris believes her role as principal is to empower teachers. She has been involved in the Oregon Chalkboard Project, a performance and teacher evaluation program.

“I love finding ways to meet the student needs, academically, socially, emotionally, as well as working with teacher leaders and becoming a collaborative principal where teachers are empowered to take on leadership roles as well,” Harris said. “It’s very intriguing to me to help and support teachers be the best they can be, in the classroom as well as leadership.”

Harris spent the 2014-15 school year serving the Redmond School District as administrator for K-12 online educational programs. While she enjoyed seeing the bigger picture at the district level, Harris also realized she wanted to get back in a building. Taking the TDMS principal position also gave Harris an opportunity to be a little closer to family and friends where she grew up in Hillsboro.

It was her teachers there that convinced Harris to get into education in the first place.

“I’ve wanted to be an educator since the seventh grade when I had some fantastic math teachers that really led me into enjoying school and my sports,” Harris said.

She holds a bachelor’s degree in secondary education and a master’s in mathematics with an extensive background in student assessment and teacher evaluation.

Her first teaching job was at a middle school in the Hillsboro School District, where she taught seventh, eighth and ninth grade math for 14 years. Harris was also the dean of students for two years.

Harris replaces Patrick Consoliver, who resigned at the end of the 2014-15 school year. She was one of 16 applicants for the TDMS principal position that was advertised nationwide. She started work at the beginning of August.

A meet and greet to welcome Harris to The Dalles is scheduled for Thursday, Aug. 27 at 5:30 to 7 p.m. in the TDMS library.

“I’m just really excited to be here,” Harris said. “The staff is very welcoming and very warm and very much in tune with wanting to help and support the students and they know that they have some awesome kids and they’re really ready to take this place to where they’ve never been before. I’m really excited to help and lead in that direction.”