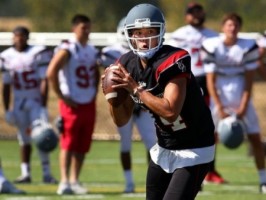 MONMOUTH – When the season begins Saturday at Humboldt State, the Western Oregon football team will be looking to keep its positive momentum going after finishing 6-5 last season and posting the 10th consecutive winning season.

The Woloves will have to win without some key contributors from last season’s squad. Gone is starting quarterback Ryan Bergman, who passed for 2,864 yards and 26 TDs and averaged 318.2 yards per game to be ranked ninth in the country.

On the defensive side, they lose defensive lineman Kraig Akins, who earned All-GNAC first-team and led the team in tackles (86), tackles for loss (22), sacks (7.0) and forced fumbles (2).

“We lost a really good quarterback this year who was one of the best in our conference, we lost Tyrell Williams (who) is with the Chargers right now and then Kraig Akins was a very dominant D-lineman,” coach Arne Ferguson said. “Those three (positions) were extremely hard to fill.”

The Wolves do, however, return sophomore all-American wide receiver and kick returner Paul Revis, who became the first player in Western Oregon history to eclipse the 1,000-yard mark for receiving yards in a season by recording 1,149 yards on 67 catches. He also tied the school record with 11 touchdowns and set the school record for most yards per catch (17.1).

“The quarterback last year threw it to me when I was open and made it easy for me,” Revis said. “Hopefully I can keep building off that and break my own records.”

“I think our main focus (on defense) has to be on turnovers, we have to step up and rise to the challenge,” Kuenzi said. “Our D-line is always going to be good (and) I think we’re going to be solid on defense. Offensively, I think we have enough guys that can step up and fill those shoes.”

Kuenzi, a graduate of West Salem, finished his junior season with 65 tackles, 2.5 sacks and a blocked kick.

“We feel Shane Kuenzi, going into his senior year has been a two-year starter for us already (and) we have high expectations for him,” Ferguson said. “Paul Revis was in one poll voted in the top-five wide receivers in Division II as a sophomore.”

The team also welcomed basketball star, Andy Avgi, who on the hard court averaged 18 points per game and was named the GNAC Player of the Year last season. It was the first time he’s played football since he was in high school.

“At first it definitely was difficult adjusting to the speed of the game and learning on the fly,” Avgi said. “I think I can help at my position, just another weapon that they can use (on offense).”

This year’s incoming freshmen class also marked the largest class in school history as Ferguson and the coaching staff brought in 38 players to add to the depth of the program.

The Wolves were recently picked to finish fourth in the Great Northwest Athletic Conference preseason coaches’ poll that was released on Tuesday. They received 23 points and one first-place vote. Azusa Pacific (defending conference champions), Humboldt State and Central Washington were the three teams picked to finish ahead of them in the standings.

“The teams we play are extremely good, (we have a) very competitive schedule and we open up at Humboldt at their place, North Alabama is on our schedule and they were a playoff team in Division II,” Ferguson said. “The most important thing is the work they’ve done in the offseason and throughout the summer where we had 45-50 players stay; it’s really showing the maturity and depth within our team and it also adds to the competitiveness within our team.”