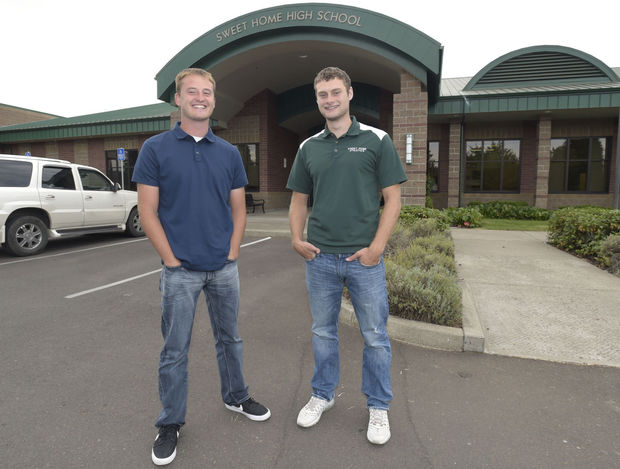 SWEET HOME — The toughest part about being new teachers won’t be managing classrooms of teens only a few years younger than themselves — some of whom they used to know as fellow students.

The real challenge, say Drew Emmert and Ryan Graville, will be learning to call their colleagues by their first names.

Today, they take over their own classrooms as full-time high school teachers for the Sweet Home School District.

Both men say they’ve landed their dream job in coming back to their home town. Even so, neither is sure about the idea of being called “Mr.”

Emmert said he knew even before graduating that he wanted to pursue teaching and coaching. He spent two years at Hesston College in Hesston, Kansas, and two more at Graceland University in Iowa, majoring in P.E. with an endorsement in health and a minor in coaching.

Graville studied business at Linfield College in McMinnville but found his calling in education when he came back to Sweet Home for a summer basketball league coaching job.

It was too late to enter the teaching program at that point, he said, so he finished up his business degree and received his master’s in teaching from Western Oregon University last year.

Both men student-taught at Sweet Home last year, and both saw positions open when their mentor teachers moved on.

The two had been looking into other jobs where they might work together — even as far away as Alaska.

“That was a no-brainer,” Emmert added.

Former Principal Pat Stineff, who also had been principal when the two were students, hired both men for their jobs. Then, as varsity basketball coach, it was Emmert’s job to hire for the JV position.

“I asked (Graville) some pretty tough questions, but I gave him the job,” Emmert said.

Graville said he didn’t take business classes as a Sweet Home student and didn’t really get into the subject until he was a sophomore in college.

He said his goal as a teacher will be to help his students manage their personal finances and learn how the economy works: real-life information they can use to build their skills in other subjects.

Not every student understands the connection between, say, learning to write an essay on Shakespeare and doing something with his post high-school life, Graville said. Business offers an immediate connection, but it can also bridge gaps in math, reading and science.

Emmert said his goal as a P.E. teacher will be to forge strong connections with his students.

On a classroom level, he said he wants to help them build health and fitness skills they’ll use all their lives. He also plans to carry on fun traditions he experienced himself as a Sweet Home student, such as various tournaments in P.E.

“I remember getting gold birdies for winning (in badminton), and just having fun,” he said. “That’s what I want to do.”

But more than that, Emmert said, he wants to help his students in all aspects of all their classes, show them a world that exists outside of Sweet Home and let them know it’s easier to go to college than they might think.

Graville agreed. “I don’t think a lot of them realize,” he said.

Both said they think their ages might help in building relationships with their students and players, since just a few years ago they were standing in just the same place.

“You can connect with them a lot better,” Emmert said. “You have close to the same experiences.”

Emmert and Graville said their colleagues in the district have been wonderful to work with, and that their own former teachers have stopped by regularly to offer any help or advice they might need.

“The teachers have been awesome, as far as welcoming us and helping us,” Emmert said.

Added Graville: “They’ve really made us part of the staff.”