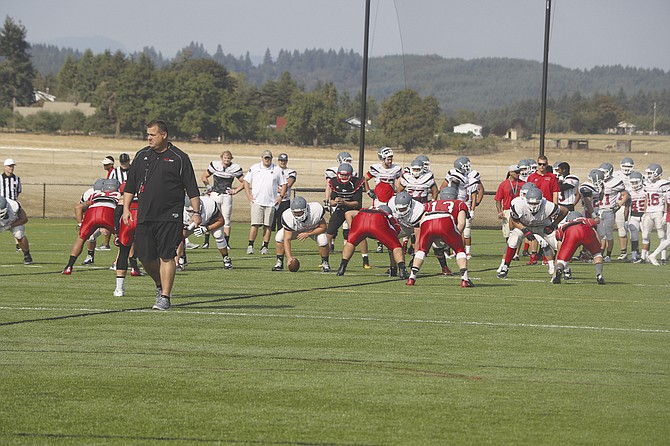 Published by: Itemizer-Observer
By: Lukas Eggen

MONMOUTH — At first glance, Western Oregon appears set up for a run at the Great Northwest Athletic Conference title. The Wolves return a majority of the starters from a year ago when WOU finished in a three-way tie for second.

If head coach Arne Ferguson is to help lead the Wolves to a conference title this year, Western Oregon must navigate a competitive conference and see some new faces perform in key positions.

“Game after game is decided by one or two plays,” Ferguson said in an interview with the conference. “How well this team comes together and as a team, how we do the little things will be important to win those one or two plays.”

The Wolves were one of the conference’s most prolific on offense in 2014. WOU finished second in the GNAC in passing yards, averaging 309.5 yards per game, but the Wolves have some key pieces to replace if they want to replicate that success.

Chief among them is Tyrell Williams, now with the NFL’s San Diego Chargers. Williams ended his WOU career as the leader in receiving yards (2,792) and touchdowns (21).

Also gone is former starting quarterback Ryan Bergman, who threw for 26 touchdowns last season and was ranked ninth in the country in passing yards per game.

In his place, senior Trey Shimabukuro will start the season-opener at Humboldt State on Saturday evening.

Shimabukuro played in five games in 2014, throwing for 541 yards, three touchdowns and interceptions while Bergman was injured.

Shimabukuro will have the luxury of throwing to one of the conference’s most dangerous offensive weapons in Paul Revis.

The sophomore receiver/returner set a program record for receiving yards in a season (1,149) and tied the school mark for receiving touchdowns (11). Revis averaged 184.5 all-purpose yards in 2014, seventh most in all of Division II.

In addition to receiver, Revis is one of the conference’s top returners, averaging 23.7 yards per kick return in 2014.

WOU also sees four of five starters on the offensive line return. The Wolves hope that experience leads to a big improvement after allowing 54 sacks in 2014 — the second most in the nation.

WOU may also have a secret weapon to unleash on opponents this fall. Western Oregon basketball player Andy Avgi will play as a tight end for the Wolves.

On defense, WOU’s front seven will form the team’s strength.

Senior linebacker Shane Kuenzi had 65 tackles and 2.5 sacks in 2014, while defensive linemen George Swartzlender gives a 300-pound presence in the trenches.

While the Wolves will see 18 starters return, WOU’s newcomers will have a big chance to contribute. Among them include freshman defensive back Chris Adamo and freshman receiver Malik Braxton.

The Wolves enter the 2015 season with conference title aspirations. Whether they accomplish that goal will depend on how quickly some key players step up in new roles.