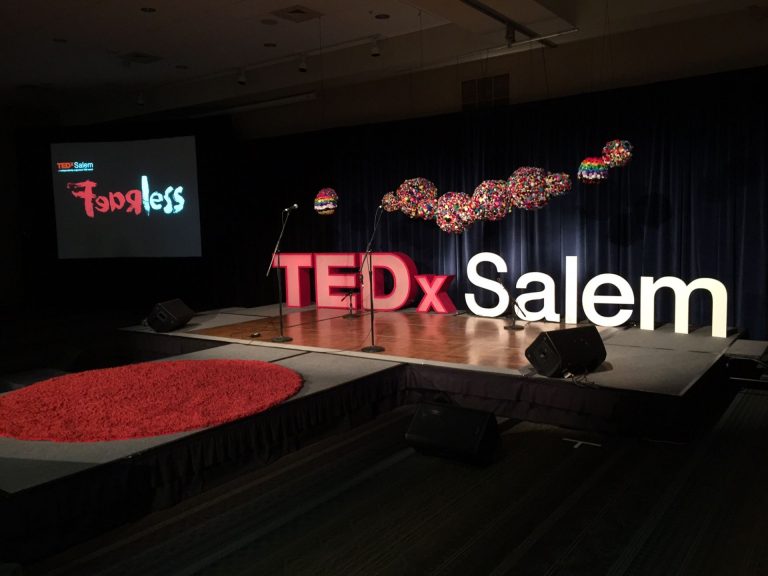 What does it mean to be fearless?

That was the theme of the third annual TEDx Salem at the Convention Center on Saturday.

Maya Kaup, a junior biology major at Willamette University and founder of the university’s Food Recovery Network, said fearlessness is “not letting anything stop you from doing what you are passionate about.”

Her slight fear of public speaking did not stop her from being one of Saturday’s speakers.

Kaup’s presentation, “A Taste of What We Waste,” was on how we can reduce the amount of food thrown away by donating it to those in need.

“It is our moral obligation to do what we can to change the world,” Kaup said in her talk. “These problems are solved when people choose to address them.”

TED (Technology, Entertainment, and Design) is a nonprofit organization founded in 1984 with the slogan “Ideas Worth Spreading.” That is done through TED Talks that are no more than 18 minutes long

The “x” means that it is a local and independently organized event that “brings people together to share a TED-like experience,” according to the TEDx Salem website.

Through a series of intense and passionate talks, audience members on Saturday had the chance to hear the stories of local people brave enough to get up on stage and learn what it means to be fearless.

A co-curator of the event, Brian Hart, said it is “whatever people want it to be.”

“We don’t want to tell people what it means. We want them to come and have this experience and then interpret it for themselves,” he said.

Hart referred to fearlessness as the driving factor for keeping our Paleolithic ancestors alive, and that he feels that that same instinct is alive in all of us today.

CM Hall, project coordinator of the Western Region Interpreter Education Center at Western Oregon University and a professor of deaf/blind interpreting and LGBTQ studies, gave her talk on the importance of equal access for those among the deaf/blind community.

Hall offered five tips for people hosting an event and for communicating with deaf/blind individuals in general: budget for an interpreter; use the microphone if there is one, for someone hard of hearing may feel uncomfortable having to ask the speaker to use it; put energy into learning phrases and verbal cues in order to get to know someone; talk directly to the deaf person and not to the interpreter; and use natural gestures or the environment around you, such as pen and paper, to communicate with someone.

“We have the opportunity to grow and to learn, and it’s worth it,” Hall said.

Speaker David Craig, a Willamette biology professor and self-proclaimed “bird nerd,” discussed birds and how he feels that they are fearless.

Craig told of one bird that was tracked with a GPS unit and flew 7,000 miles — farther than was thought possible.

“No food, no water, no rest, no ability to land… talk about fearless,” Craig said.

Audience member Daniel Espiritu, 37, of Portland said that he thinks fearlessness is about taking action and moving forward.

“It takes fearlessness to look outside the box, to break from convention, and to be different,” Espiritu said.

Hart said the event hosted about 450 participants, up more than 100 from last year.

Use the hashtag #TEDxSalem to join in on the conversation.