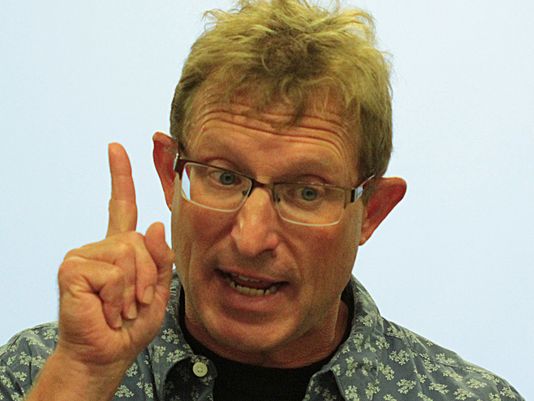 On an August evening this past summer, poet Henry Hughes captivated an audience at the Stayton Public Library as he performed poems with accompanying photographs projected beside him and, in the second half of the program, as he read poems on fishing.

Hughes is an English professor at Western Oregon University, but he is far from an academic poet. An avid fisherman in both ocean and river and an enthusiastic admirer of visual art, he brings his passions into his poetry and partners with area artists including Paul Gentry and Richard Bunse. He  also is a lively performer, fully engaging with his listeners.

For me, however, the best experience of Hughes’s poems is on the page, where I can hear the lines in my mind, re-read them to catch nuances of the stories they tell, perhaps read them aloud to myself. That’s how I’ve savored all three of his poetry collections — “Men Holding Eggs” (2004), “Moist Meridian” (2009) and “Shutter Lines” (2012).

The poems in these books have an intense physical reality, both in the places and situations they evoke and in their language. They are densely packed with experience, both the poet’s own and the vividly imagined experience of others. And they are packed with sounds and images that linger long after reading.

The experience infusing these poems includes boyhood, young manhood, adult family life, the wars of our time. Their speakers witness violence, suffer loss. Some of the poems reflect Hughes’ experience as a seaman and as a traveler and resident in the Far East, teaching in China and Japan.

There is, of course, fishing. Sometimes it’s a way to deal with pain: At news of a friend’s death, the speaker in one poem goes fishing even though it’s drizzling. Sometimes the river serves as a refuge: In another poem, the narrator comments, “There’s time enough in a river to bleed out / anything.”

Others have an extraordinary empathy. In the poem “Grackles,” the speaker, wakened by a baby’s crying, hears the mother’s voice soothing her child. Then everyone hears “Grackles, screeching mad,” as a cat climbs toward a nest. At the end of the poem, the speaker addresses the mother: “We all saw the nest tear, / and you, / you felt the crazed / creature cry / of parentage.”

Part of Hughes’ poems’ intensity comes from condensation — only the essentials of action without any prosey transitions. Part of it comes from vivid images and a dense sound texture, as in these opening lines of the poem “Tillamook Man”: “They dredged a dark jaw / from Tillamook Bay— / a man, thirty-years-old, ancient. / No face or frock / to speak his wealth or well-won wars.” Here, Hughes uses alliteration (repetition of consonants) to hold the lines together and make us feel them in our mouths.

This article was written by Eleanor Berry, chair of the Mid-Valley Poetry Society. It is one of a monthly series by MVPS members on books by Oregon poets. For further information about the MVPS or the OPC, contact eberry@wvi.com.