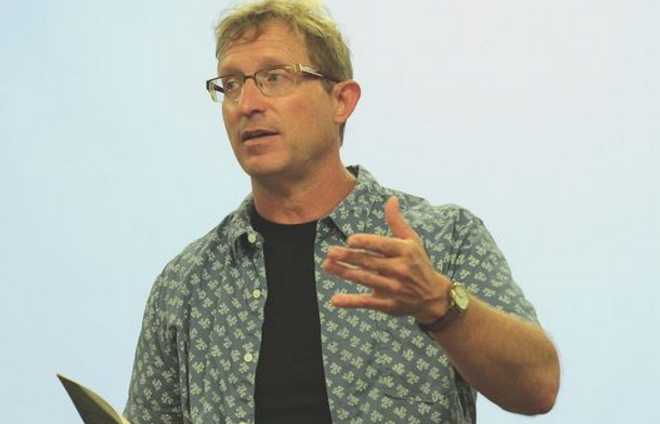 It isn’t often that you fall in love with a place that you’re seeing for the first time during a job interview.

“I thought, ‘Man, this is my kind of country,’ ” Long Island, N.Y, native Henry Hughes said about Oregon. “I was immediately enamored of the forests and the rivers and its fishing culture.

Hughes, bespectacled with a ready smile, glacial blue eyes and a Kewpie doll-like widow’s peak over his forehead, still has a trace of his New York accent, especially when he’s talking passionately about his favorite topics.

He got the job, becoming an assistant professor of English in 2002, moving up to become a full professor in 2011 at Western Oregon University.

Poetry is his literary oeuvre, and fishing is a theme that plays prominently in his published anthologies, “Men Holding Eggs,” the winner of a 2004 Oregon Book Award; “Moist Meridian,” a finalist for the 2011 Oregon Book Award; “The Art of Angling: Poems About Fishing”; and “Shutter Lines.”

“I like the distillation of experience. I like the things come to a very powerful moment. And poetry’s always been that way for me. It’s concentrated,” Hughes said. “I’ll work on a poem for a long time, many, many hours, and it’s a small poem, maybe 10 lines.

“It’s a little like steelhead fishing where you spend eight, maybe 10 hours casting in the rain, and you get one strike. Maybe you get a fish.”

Fishing and writing are mutually enriching, he added.

“Both, absolutely both,” he said emphatically. “And like a lot of hunters and anglers, I feel that my level of engagement and sensitivity is definitely heightened because I’m chasing something.

“I like taking a walk in the woods. I like kayaking down a river. But when I’m fishing, and I used to hunt when I was younger, I haven’t in years, I am, you know, keying on things. And I just feel that I’m more acutely engaged, and I really notice that.”

Hughes, 50, met Chlöe Myers, a professor in teacher education, in “one of those dreaded committee meetings” at Western Oregon in 2005, dated, fell in love and married six years ago, Hughes for the first time.

“She’s British, born and raised in England and may have inherited, too, that she appreciates the culture of fishing, that it’s not just extracting, but there’s a sensitivity to nature …,” he said. “She’s not as passionate as I am. We have fished together. In fact when we dated, we fished a lot together.

“And it was something that I really appreciated, that she enjoys the outdoors. Chlöe was sensitive to that too, that I was really in love with the literary tradition of fishing. And the Brits are very keen on that.”

The marriage made Hughes an instant dad to two boys, Zach, now 18, a freshman at Oregon Institute of Technology in Klamath Falls, and Gethin, 15, a sophomore at Central High School in Independence.

“I have two stepsons,” he said, then paused, “who don’t like fishing.”

When asked if that broke his heart, there was another pause, then a wide smile. It was one of those “like father, like son, like father” situations, Hughes explained.

“It did break my heart for a little while,” he said. “But I remembered my dad, who didn’t like fishing, but he took me because I wanted to go.

“And with these guys, if they want to do other things, I gotta do that. They’re into music, or they’re into computers a lot, and I’ve got to try and find that ground with them. That’s my job.”

Gethin is in the band at Central, and Zach’s working on becoming a computer technician at OIT.

Hughes’ next book, “Back Seat with Fish: A Man’s Adventures in Angling and Romance,” will be released this winter or early spring by Skyhorse Publishing. It’s about fishing, obviously, but intertwined with elements of self-discovery, maturation and evolving realizations of what it means to be man.

“It’s about masculinity, too, and I hope not in an old, you know, Hemingway, tough guy, I killed a fish … A couple of people have read it already, and a couple of women are like, ‘Ahh you’re kind of pushing the edges here.’

“But other people really liked it.”

Changing a work to get the approval of those whose favor you seek is something that Hughes said he has seen at gatherings of writers looking to improve, and it’s not something to which he aspires.

“The writing workshop, unfortunately, sands the edges off so that everyone in the group likes the poem or likes the story,” Hughes said.

Looking ahead, the evolution, the voyage of self-discovery, continues in both his personal and family life, Hughes said with a smile.

“I feel myself still very much a work in progress. I really mean that,” he said. “It’s not just a nice thing to say … I’m learning. I’m trying new things.”

Occupation: English professor in the Humanities Division at Western Oregon University in Monmouth

Fast fact: Hughes lived overseas in Japan and China between his Master’s and Ph.D. degrees.

Quotable: “I tried to be a professional writer. And when I sold like one story a year, I realized (make a sound like a time-out buzzer in basketball) I’ve got to find another kind of occupation. So I went back to do a PhD. I thought I’ll be a college teacher. I love literature. I love writing.”

From the anthology “Moist Meridian”

Too dark to retie,

they walk fishless over the bridge,

for the dry drive home.

The other doesn’t want to talk. There’s a barbecue tomorrow.

If you catch something, she said.  That’d be wonderful.

that strike behind the stone —

as if nothing happened.

In a hole deeper than sleep,

in her bright sleeve.