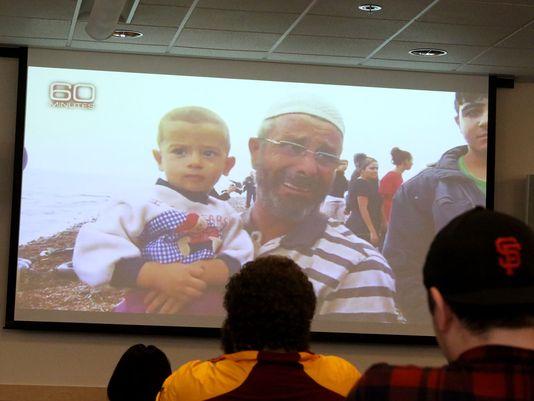 It was always a dream of Eriqa Hermen’s to backpack across eastern Europe.

When her friend wanted to go, too, they planned for the month-long adventure. Hermen was ready and raring to go.

But instead of simply crossing an item off her bucket list, the recent college graduate and former Western Oregon University exchange student was exposed to the Syrian refugee crisis.

The Syrian Arab Republic, a middle eastern country bordering Turkey and Iraq, has a population of more than 22.5 million people.

Now about 16 million of those people have either fled their homes — if not Syria entirely — to escape a brutal civil war that has raged since 2011. This mass movement of people is known as the Syrian refugee crisis.

Working their way through Austria, Poland, the Baltic states, and Sweden, where she went to university, Hermen and her friend came across anti-immigration protesters, religious demonstrations, and people working to help these refugees.

Hermen described her experience as she addressed students in an international affairs class at Western on Friday. She was speaking to the class in preparation for the longer presentation she plans to give Monday, Oct. 19.

She explained the history of the conflict, the devastation and mass causalities that occur every day, and what she witnessed as she and her friend made their way through Eastern Europe.

The crisis began in March of 2011, when anti-government demonstrations started, as part of the Arab Spring. The peaceful protests quickly escalated after the government’s violent crackdown, and rebels began fighting back against the regime of the Al Assad family and Ba’ath party, which took control in the 1960s and 70s.

By July of 2011, army defectors had organized the Free Syrian Army and many civilian Syrians took up arms to join the opposition, the Mercy Corps reports. Divisions between secular and Islamist fighters and between ethnic groups, continue to fuel the crisis.

As conditions have worsened, families, individuals and children have fled the country. Many come to Europe to find family. Others simply seek safety. But the scale of the migration has created an anti-immigrant backlash in several countries, and Herman talked about witnessing its ugliness.

“The number one thing they say is that these people are going to come and take over,” Hermen said, explaining what the anti-immigration extremists argue. “They say (the refugees) come to their countries and refuse to integrate. Instead, they think they are trying to kill the culture of the people already living there and will take over in a few years.”

While in Poland, she had to walk through an anti-refugee demonstration outside a church by her hostel. There was no other way to get to her lodging, so she kept her head down and walked as calmly as possible through the angry mob.

Hermen said the demonstration made her feel like she needed “to work against prejudice and racism even more than usual.”

“I get upset by people trying to make it harder to help others,” she said.

Not only are there vocal groups of people in Europe working to keep the refugees out, but the authorities in many cases are working to do the same.

In southern Sweden, Hermen said there were police “littering” the hotels to make sure no one was able to get in; many countries in Europe are closing their borders and having police barricade the trains that refugees try to come in on.

Additionally, if a refugee is able to find a place to settle, they may have to wait years before they are allowed to work or told whether or not they can stay. And since a lot of these people used their life savings to escape, they have no choice but to keep moving forward.

More than 50 percent of these refugees are actually children who have lost everything, according to Mercy Corps.

Hermen spoke of a young girl who fled to Sweden four years ago and was enrolled in school. Now in high school, she recently received notification that she needed to leave the country. Her friends joined together to create a YouTube video begging the government to allow her to stay since her life is there now.

As a women who wants to work for the United Nations, Hermen was deeply affected by the crisis and hopes conditions can improve.

“I hope that 20 years from now, the Syrian people will be living in (Europe) as if there wasn’t this problem before,” she said.

Though the refugees have received many harsh greetings, there are some working to assure safety to the Syrians.

For instance, Germany has an aging population that will suffer from negative impacts on its economy if it does not have a population increase, so refugees are encouraged to make Germany their destination.

Hermen encountered individuals who are using their establishments or organizations to help as well. One hostel worker she met, for instance, was giving up all the hostel beds to refugees, including her own.

“The main focus now is trying to make sure people don’t die,” she said.

Herman wanted to help as well, but wasn’t sure what she could do to help and not add any negative complications.

“I wanted to get into it, do something, she said. “I was asked by a friend in Czech Republic to go help out by the border, but it is also knowing when you will be able to help and when you will mostly be in the way, and I would not have helped.

“If I would have gone to Czech Republic to help, I would have been in the way taking up space instead of helping, since I wouldn’t be able to translate or offer a place to stay or something of the sort.”

As a result, she jumped at the opportunity to speak to Oregon students about it.

“I do this; I try to make people aware of what is going on, and help the way they can,” she said.