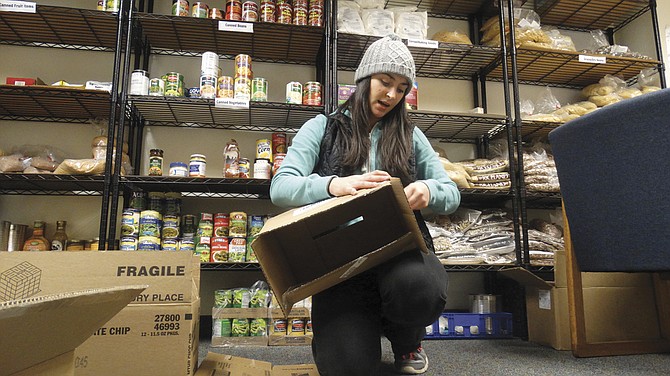 MONMOUTH — More than half of the students at Western Oregon University don’t know where their next meal is coming from. One in four classified staff members need help getting food.

WOU’s food pantry was established in 2011 to help both struggling staff members and students. To help organize the efforts, Christie Colasurdo was hired this year to be the student director of the pantry.

Along with the task of getting the word out about the pantry’s mission, Colasurdo wanted to make sure every student has a good meal for Thanksgiving. A special food drive to help accomplish that is underway this week, ending on Friday.

“We always have the food pantry open five days a week, so they can always come in, but I really wanted to get people a nice Thanksgiving meal,” she said.

Colasurdo comes from a large Italian family and has fond memories of very traditional holiday celebrations.

“It’s something I look forward to, not just because I get to eat — I mean, obviously the food is a great bonus — but it’s just the community and having something to look forward to and having a meal to bring people together, and that’s what the importance of it is,” she said. “Imagine if you didn’t have a turkey; that would be awkward.”

This isn’t the first time the food pantry has aimed to collect donations for something specific.

Previous efforts to “Help spice up someone’s life” focused on increasing the supply of spices available at the pantry.

For the Thanksgiving drive, Colasurdo is hoping to raise enough turkeys, hams and all the traditional fixings for a meal to feed 50 families.

While the dorms have ovens and kitchens, it may be tricky to cook a turkey, but students heading home for the holiday can take the food with them, she noted.

In fact, students’ homes may be where some of the food insecurity comes from, Colasurdo said.

“We are serving a population that is historically underserved on college campuses here in Oregon,” Stalley said. “We pride ourselves in providing an environment here on campus for first-generation college students, and that may be part of why we see a greater demand here for food.”

Another thing that may contribute is the increasing costs of higher education, he said.

“In that larger fabric of student debt, it may be why we’re seeing such a need on our campus,” Stalley noted.

Her freshman year, the cost to stay in the dorms was nearly $9,000. In addition, she had a $350 meal plan each term and had to add money to the plan at the end of the term.

It’s less expensive to rent someplace off campus, but then students don’t get the cheaper prices in the cafeteria, Colasurdo said.

“It’s way cheaper in the long run, so if you have means to stay off campus, it’s way smarter in the long term to do that, but if someone was thinking like that and got an off-campus place, they wouldn’t have cheap food,” she said. “So it’s kind of a poor setup, especially considering our food insecurity. It really should be thought about.”

Regardless of the reason, the WOU food pantry is helping make a dent in hunger through its efforts. In fact, use of the pantry has more than tripled since last June, Colasurdo said.

“I’m working on posters and stuff,” she said. “We always have emails going out. There’s a Facebook page, and all these things.”

Gathering donations and getting the word out is just part of the equation. The other part is in encouraging people to use the pantry.

Using a food pantry can carry a stigma, but it doesn’t need to, especially when the pantry’s services are confidential.

Most of the pantry’s donations come from the Marion-Polk Food Share, Colasurdo said, and comes with instructions on how to cook it.

“Some of the stuff that I’m concerned about that’s hard to go is our shelf-stable beans,” she said. “They take about 45 minutes to make. I don’t know many college students – I know I personally wouldn’t. Like, when do I have time to cook just beans for 45 minutes?”

Instead, Colasurdo said she tries to get more quickly prepared foods, such as canned soups.

“Everyone can cook it. It’s warm. It’s fast to make and it usually has more nutrient value than a can of refried beans,” she said. “People like it.”

How Can You Help

When: Now through Friday.

Where: Donation boxes are outside the ASWOU’s office in the Werner University Center, or at the food pantry itself, located in the Academic Programs and Services building on the bottom floor.

Of note: The food pantry needs donations throughout the week and year, but for this occasion, it is looking for things specifically for a traditional Thanksgiving meal: stuffing, mashed potatoes, green bean casserole, turkey or ham, cranberries, and pumpkin pie. Cookbooks and cooking supplies also are accepted. Thanksgiving dinners will be distributed on Monday while supplies last at Werner Center.