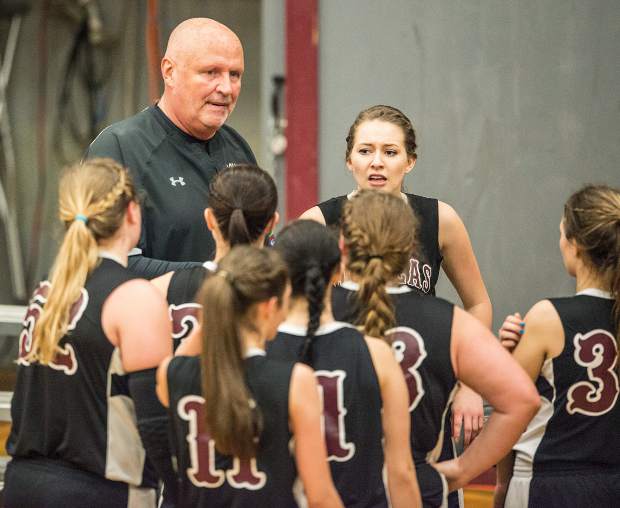 WINSTON — To every stop along the way, Kipp Archambault brings a similar approach to basketball.

Star players mean less than the sum of the entire team.

Archambault has coached all over western Oregon in a career spanning more than 25 years. Stops in Gilchrist, Klamath Falls and Salem go along with stints in Glide, Roseburg, South Umpqua and Douglas. Archambault has guided winners in both boys and girls.

“I just love basketball,” he said. “When I was in Gilchrist, I coached boys and boys are a little tougher to coach — they think they want to show off a little bit more — girls are easier to coach.

“I enjoy girls more because they listen better. They try harder. I like boys, too. I just love the game of basketball.”

Archambault’s apparently wandering coaching career has been more by design than happenstance.

“There have just been different coaching opportunities, and then we’re pretty settled here in the Roseburg area,” he said. “My wife’s in real estate and she’s very successful right now. We have to stay where she’s selling, so we’ll be around for quite a while.”

His current squad at Douglas High is 8-4 going into the Trojans’ Far West League opener Friday, when they will host North Bend.

With four starters returning from 2015’s FWL runner-up squad, Archambault’s charges are among the contenders in the FWL.

At least in part, that’s due to Archambault’s approach — one with roots harkening back to his playing days. He was inducted into the Western Oregon University Hall of Fame in 2013; his playing career with the Wolves ended with third-team NAIA All-America status in 1980 and he spent three years playing in Australia in the late ’80s, a decade and more before his players were born.

“We can always get better running our offenses and defenses, listening to our coach,” junior wing Rachel Hickam said. “That’s a big one, because he definitely knows what he’s talking about. When we listen to him, we do great things. If we listen to him and do what he’s saying, it actually works.”

Archambault isn’t above listening to his players, too. Yes, he exhorts and encourages on the sidelines during games and keeps things moving in practice. When the players speak up about what they’re seeing on the floor, he listens and the adjustments are made as a team.

“It’s fun and he helps us play as a team,” junior Darian Mitchell said. “He makes us better.”

Over the course of a 23-, 24-game regular season, Archambault wants his team to steadily improve and be nearing the peak of its ability in February.

“We haven’t pushed them beyond where they’re going to go,” he said. “But we’re getting there.”

The Trojans hosted a state play-in game last season, losing to league-rival Marshfield 37-36, and they want to move past that point this season.

“It was a heartbreaker, definitely a heartbreaker,” said Ally Schofield. “It’s given us a lot of motivation for this year, especially to beat Marshfield.”

Getting past the play-in stage, and through the first round of the playoffs to get into the tournament itself might require all of Archambault’s coaching experience. He has tournament experience: Gilchrist appeared in the tourney while he was there, most recently in 2001.

“With the senior leadership and the juniors, we’ll be there at the end, for sure,” Archambault said. “It’s been hard, but the girls have sacrificed time with their families to get ahead.”

According to Hickam, Archambault inspires that sacrifice.

“He’s like ‘We’re going to win, and we’re going to push ourselves to be the best we can be,’ and that makes you want to go in the weight room and work out after school, on the weekends or on Christmas Break, even,” Hickam said.

“He definitely instills confidence in us,” said Schofield, a 5-foot-4 senior guard who takes 10-15 3-point shots a game. “I definitely try not to (pass up an open shot), but if one of the posts is open down low, I try to get it to them. But I definitely love shooting the ball.”

That’s something Schofield — and the other Trojans — share with their coach. He is third in Western Oregon history with 601 points in the 1979-80 season, when he also had 325 rebounds in a double-double season that included a 67.2 shooting percentage.

Story published in The News-Review
By Aaron Yost