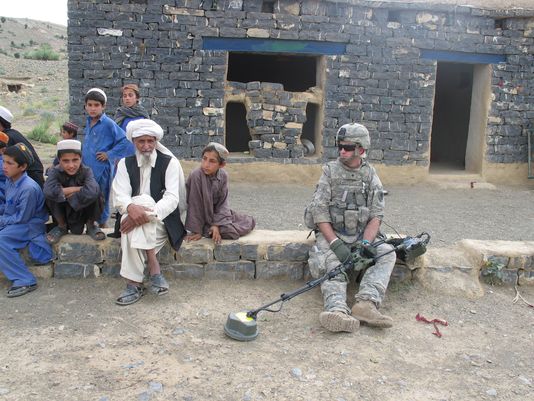 “Where Soldiers Come From” will be shown 7 p.m. Tuesday, Jan. 19, at the Historic Grand Theatre as part of the Salem Progressive Film Series.

This documentary follows childhood friends on a four-year journey from a small town in Northern Michigan to the mountains of Afghanistan and back. Beginning as a carefree group, enticed by signing bonuses and the support of college tuition, the group encounters a great change through their experience with war. Director Heather Courtney follows the young men, documenting their growth from impetuous teenagers to soldiers looking for roadside bombs in Afghanistan to young veterans dealing with PTSD. She delves into the challenges faced when they return home to their families and communities. It is a human story about friendship, family, community and how war changes these elements.

The film won the 2012 Independent Spirit Truer Than Fiction Award and had its national broadcast premiere on PBS’s award-winning documentary series POV.

Jay is the program manager for NW Women Veterans Connection, an organization that supports female vets, working to find healthy solutions to the challenges they face. Jay served in the Oregon Air National Guard as an Aerospace Medical Technician from 1979 to 1986. Upon leaving the military, she pursued a career in technology, raised three children and got involved in social-service organizations. She helped create the NW Women Veterans Connection two years ago.

Pygott is a co-founder of Home of the Brave, a organization that helps local veterans. Pygott is a US Navy veteran. He graduated from Western Oregon State University with a BS in Business Administration and a BA in International Marketing. He has worked extensively with homeless veterans in and around Salem and serves as a liaison to state legislators to further assist veterans through the legislative process.

Rodriguez is a clinical psychologist and military sexual trauma counselor at the Salem Vet Center. Rodriguez served in the Navy as a psychologist from 1992 to 1997 while completing her doctorate degree. She left the Navy in 1997 and began conducting clinical research on Post-Traumatic Stress Disorder, depression and other anxiety and mood disorders. Ten years later, she decided to work with veterans and was hired at the Portland Vet Center. She transferred to the Salem Vet Center last year.

The Salem Progressive Film Series aims to educate and raise awareness about current important issues in our community and around the world, provide a public forum for discussion and further research and stimulate personal civic involvement.

‘Where Soldiers Come From’

Article published in The Statesman Journal
By Carlee Wright