Home » Alumni » Health & wellness » WOU in the news: Relay gets ready to paint the town purple 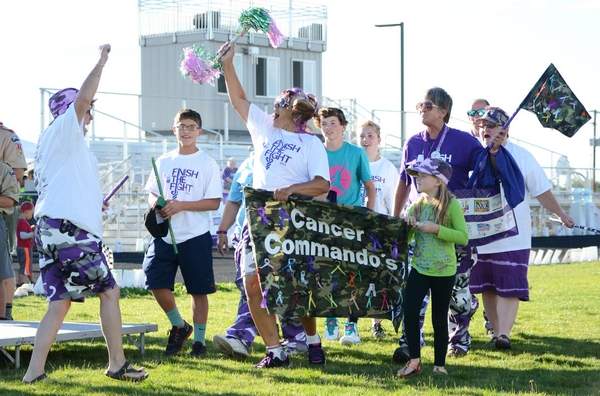 Uniting communities across the globe, Relay for Life celebrates those who have battled cancer, remembers loved ones lost to the disease and fights back by raising money to support research and help those afflicted by the illness.

The signature fundraiser for the American Cancer Society, the event is often an overnight activity — signifying that cancer never sleeps — held in communities across the world. A kick-off event for Hermiston Relay for Life is Thursday from 6-7:30 p.m. at the Hermiston Church of the Nazarene, 1520 W. Orchard Ave. The summer fundraiser begins June 25 at the Umatilla County Fairgrounds.

The kick-off rally will feature information tables — including how to start a team, fundraising ideas and general information about cancer. Also, food will be available for purchase and there will be a silent auction. There is no fee to register a Relay for Life team.

Having the kick-off event helps in spreading the word about the summer fundraising effort, said Miranda Hunt, publicity chairwoman for the Hermiston event. Money raised, Hunt said, not only helps with cancer research, but also provides resources for those fighting the disease. Those with cancer can receive assistance with travel expenses for treatment, wigs and other programs that help with their overall well-being and spirits while fighting the disease.

Initially involved through community service hours while in high school, Hunt has continued to support Relay for Life for more than a decade. In addition to participating in Hermiston’s event, she was involved in Polk County while attending Western Oregon University.

“Volunteering and giving back is why I got involved in the first place,” Hunt said. “Some good friends in my life got cancer, so that made me want to get more involved.”

In addition to being on a team, Hunt has volunteered as the youth chairperson, luminary committee and team development.

Hunt encourages people to get involved early. The months leading up to the summer event provide an opportunity to raise more money to help in the fight against cancer.

This year’s theme is “Paint Your Town Purple.” Hunt explained purple is the overall color associated with cancer and she hopes people will help raise awareness by wearing purple clothes, putting up purple signs and lights.

The Hermiston Relay for Life committee is seeking suggestions for its 2016 grand marshal. Hunt said nominations are being accepted during the kick-off event.

For more information about Hermiston Relay for Life, contact Hunt at 541-720-0369 ormlhunt06@gmail.com.

Story published in the East Oregonian
By Tammy Malgesini