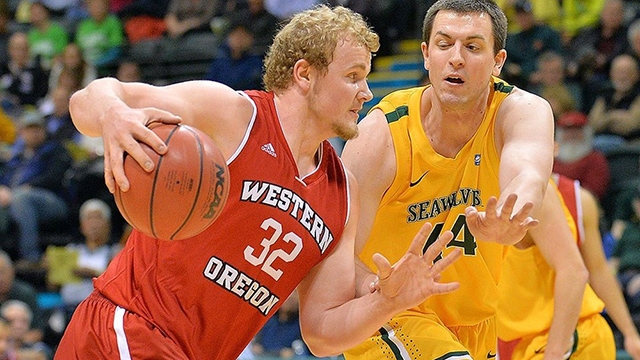 The Western Oregon Wolves saw a year of firsts in the 2014-2015. Not only did head coach Brady Bergeson and star forward Andy Avgi lead WOU to its first 20-win season since 1996-97 (and its first as a DII basketball program), the team also won its first ever Great Northwest Athletic Conference title, made its first NCAA tournament all while grabbing its first national ranking.

But this season, with first-year head coach Jim Shaw in toe, the Wolves captured a new first: a No. 1 ranking in the NABC Coaches’ Poll.

Shaw stepped in to become the new coach of WOU after Bergeson — the 2015 Great Northwest Athletic Conference Coach of the Year — left after the season to coach at Regis in Colorado.

Shaw is no stranger to WOU. He played basketball there when they were an NAIA team, earning All-American honors in the 1983-84 season. He was new, however, to coaching in Division II.

“It was like a full circle,” Shaw said about coaching for his alma mater. “I saw it as a way to pay it forward and give back at the same time. I spent some really special years here, to be able to share that experience with others. I hope I can help others have a similar college experience that I had.”

Shaw came to the Wolves with 25 years of experience as a top assistant coach in Division I. He was an assistant at Washington from 2004-2013 where he helped the Huskies to a 208-100 record, five Pac-10 championships and three Sweet 16 appearances. He also made stops in Oklahoma, coaching alongside Kelvin Sampson, as well as coaching Gary Payton and the Oregon State Beavers in the early 1990s.

“At Oregon State, it was just the importance of having a system that you believed in and something that you could recruit to and build on,” Shaw said of some of the valuable lessons he learned along the way. “At Oklahoma, having an identity for your program. When you walked in the gym, you were known for something. And at Washington, the importance of having elite-level talent and being around one of the best. Lorenzo [Romar] was the best I have ever been around at building an image, a culture to build your team around.”

Now he had the daunting task of continuing the climb of a team that has been on a remarkable turnaround. Armed with the reigning GNAC Player of the Year in Avgi along with three other seniors and two solid transfers, Shaw was expected to take this team even further.

“I just wanted us to be the best that we could be,” Shaw said of this season’s expectations. “I wanted us to look at each day as an opportunity to get a little bit better. If we were able to do that, we wanted to see where that took us.”

This season has not been short of signature wins for the Wolves: They had a huge victory over a UC San Diego team that now sits at No. 6 in the nation, as well as home wins over conference foes Seattle Pacific and Alaska-Anchorage.

This past week saw perhaps the biggest challenge of the season for the Wolves, when they fell behind then-ranked No. 19 Seattle Pacific by 14 points at the half on the road. A dominating 41-27 second half tied a game that the resilient WOU would prevail in overtime, 84-82.

“They are good,” Shaw said of SPU. “Their last loss was to us at home. They pose a lot of challenges. They are bigger, longer and stronger, and there are more of them. Dealing with that combination and the fact that they are well coached and organized was tough.

“When we played here [at home against SPU for the first time], I thought we controlled the tempo the whole game and then all of a sudden, we were in overtime. It was the same situation there, they controlled the whole game. I thought the guys did a good job of staying in there. Once we got close enough, guys like Jordan Wiley and Andy Avgi hit some big shots. I thought if we could have made some more free throws, the game might have been a little easier to close.”

That win over Seattle Pacific helped vault Western Oregon from No. 3 in the rankings all the way up to No. 1, something the program had never before accomplished.

“They have done a fantastic job,” Shaw said of his team’s most recent achievement. “They have shown up every night. There have been some nights we have played really well and some nights where we didn’t play quite as well. But we are pretty consistent and consistency is a huge thing. I tell guys that the greatest ability anyone can have is dependability and they have been dependable to each other.”

WOU defended its No. 1 ranking with another tough, come-from-behind win against Western Washington on Thursday. A dominating 56-41 second half as well as double-doubles from both Avgi (34 points, 14 rebounds) and Julian Nichols (17 points, 10 assists) brought the Wolves to 21-2 on the season.

A large part of this team’s success lays on the shoulders of Andy Avgi, the team’s starting forward who averages 31.9 minutes per game. Avgi and his fellow seniors — including starters Devon Alexander and Jordan Wiley — have been through all of the ups and downs over their four-year tenure in a WOU uniform. His freshman season saw a mere 10 wins, while he would help the team improve by eight wins in his sophomore campaign. His junior year was a historic one in the annals of WOU lore, and now they have reached the pinnacle of the DII men’s basketball world.

“It definitely means a lot,” Avgi said of his journey, “especially with our core group of four guys that has been here the whole time. We are still together and that is a huge thing. We know each other really well and know what each of us is going to do. The addition of Julian [Nichols] last year, that was just like the cherry on top. I have never been a part of a team that is No. 1, not even No. 1 in state in high school. But we are No. 1 in the nation in college, which I think is far better than that.”

Avgi took on a new challenge this season and became a two-sport star. He opened this collegiate year playing tight end for the Wolves’ football team. He had a nice season in limited playing time, snagging 12 receptions for 192 yards and four touchdowns, including a huge season opener against eventual GNAC champion Humboldt State grabbing three receptions for 61 yards and a touchdown.

He wouldn’t be the first tight end in college history to thrive in two sports. NFL greats like Antonio Gates, Tony Gonzalez and Jimmy Graham were all successful tight ends who played basketball extremely well in college.

“I was brought up playing multiple sports,” Avgi said. “My brother played multiple sports and I wanted to follow in his footsteps. I just ended up being a little bit bigger than him!

“I decided to play basketball only in college until this year, to mix things up. The athleticism of basketball helped me on the football field and some added strength from playing football has helped on the court this year.”

Avgi is currently second in the GNAC in scoring at 22.1 points per game, which is also good for 23rd in the nation. He is one of the leading frontrunners to bring home the GNAC Player of the Year Award to add to an already decorated career that includes a GNAC Freshman of the Year Award, an All-American Selection (fourth team), an All-Conference honor as well as last year’s Player of the Year.

But that isn’t what the final leg of Avgi’s journey is about. There is one last first in which these Wolves would love to be a part. Avgi and WOU are focused on the next five games to continue their season well beyond February 29.

“Play our game, that has been our motto all season,” Avgi said. “If we play our game, we are going to definitely excel. If we share the ball, we are pretty hard to beat. We are excited to see where this journey will take us.”