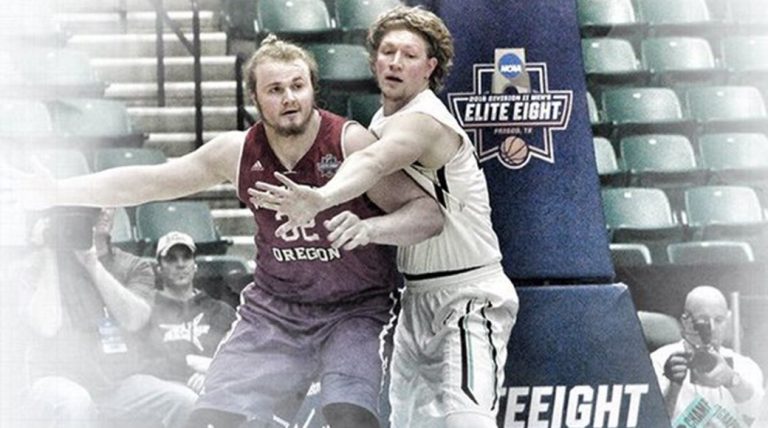 FRISCO, Texas – The season-long ride with the most prolific Wolves men’s basketball squad in school history is over.

The Western Oregon University men’s basketball team saw it season come to an end with a 74-55 loss Thursday night in the NCAA Division II Men’s Basketball national semifinals against Augustana (SD) at the Elite Eight.

“They were the best team other than Oregon that we played all year,” WOU head coach Jim Shaw said postgame. “I thought we came out and got out to a good start, but when (Augustana’s Daniel) Jansen came on the floor, the whole energy of the game changed.”

Western Oregon led 8-2 early when the Vikings’ big man, the National Association of Basketball Coaches Division II Player of the Year, entered play at the Elite Eight for the first time after missing the team’s win against Tarleton State on Wednesday. Jansen hit a jump shot and a pair of 3-pointers to tie the game at 10-10.

The Wolves hit five of its first 11 shots, but struggled finding points the rest of the first half. On the other hand, Augustana posted a 24-9 run over the final 10 minutes of the half. WOU closed the half hitting just three more shots on 19 attempts, including a Devon Alexander 3-pointer from nearly 30 feet at the buzzer to trail 34-19 at the half.

After Augustana (33-2) hit the opening jump shot of the second half, Western Oregon went on a 5-0 run to pull within 12 points. Julian Nichols connected on a lay-up while being fouled and Tanner Omlid dunked on a fast break opportunity started with a steal.

With 11:30 left in regulation, Jordan Wiley hit a 3-ball in the corner and Omlid found a layup to get the Wolves back within 17 points, as close the Wolves would get until Jordan Schriber hit a pair of free throws under the two-minute mark.

Omlid, who scored 10 points in the second half, led the way for Western Oregon with 17 points to go along with eight rebounds and three steals. In addition to Omlid, the Wolves had two more double-figure scorers including a 12-point performance from Alexander in his final game in a WOU uniform.

Nichols scored 10 points along with three rebounds, two assists and two steals for the Wolves. Wiley had eight points while Schriber, Andy Avgi, Connor Thompson and JJ Chirnside rounded out the Wolves’ scoring each with two points.

The Wolves were able to post 22 points on 11 Augie turnovers, including nine steals. WOU had four blocked shots compared to Augustana’s one.

For the Wolves, this marks the final game in the careers of Avgi, Nichols, Alexander, Wiley and Schriber. The quintet led the WOU to a repeat Great Northwest Athletic Conference regular season championship and first-ever titles in the GNAC Championship and the NCAA Men’s Basketball West Regional. Over the last four years, Western Oregon has won 82 games – including 54 during the two-year tenure of Nichols.

This Wolves team will sit in the history books with the most overall wins in a season (31) and most wins within GNAC league play (18).