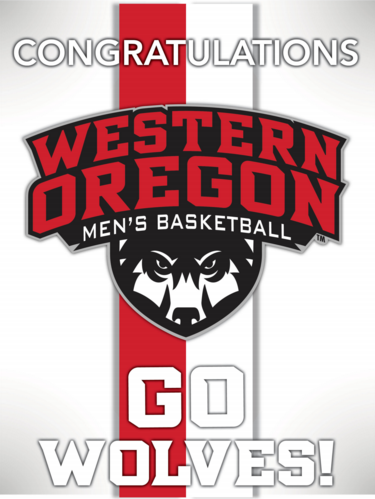 In recognition of the astounding achievements of this year’s Western Oregon University men’s basketball team, Monmouth and Independence will issue a proclamation at the next Monmouth City Council that Friday, April 8 will be WOU Men’s Basketball Day. The City Council meeting will be held at 7 p.m. on Tuesday, April 5 in Monmouth’s Volunteer Hall.

The basketball team made it to the Final Four in the National Collegiate Athletic Association (NCAA) Division II national tournament – the furthest any WOU men’s basketball team has gone in the tournament. The team will sit in the university’s history books with records such as (but not limited to) the most overall wins in a season at 31, the most wins within Great Northwest Athletic Conference (GNAC) league play, and the first number one national ranking in the team’s history. Team members also earned achievements. Coach Jim Shaw was named Coach of the Year by both GNAC and the National Association of Basketball Coaches. Andy Avgi received numerous recognitions as well, including Player of the Year by the Division II Conference Commissioners Association. In March, WOU hosted the NCAA West Regional tournament on campus.

Some businesses in the Monmouth/Independence are supporting the team and recognizing their accomplishments by offering specials and discounts to those wearing WOU gear (or red and black). Participating businesses will have a poster displayed that announces their involvement and special offer.