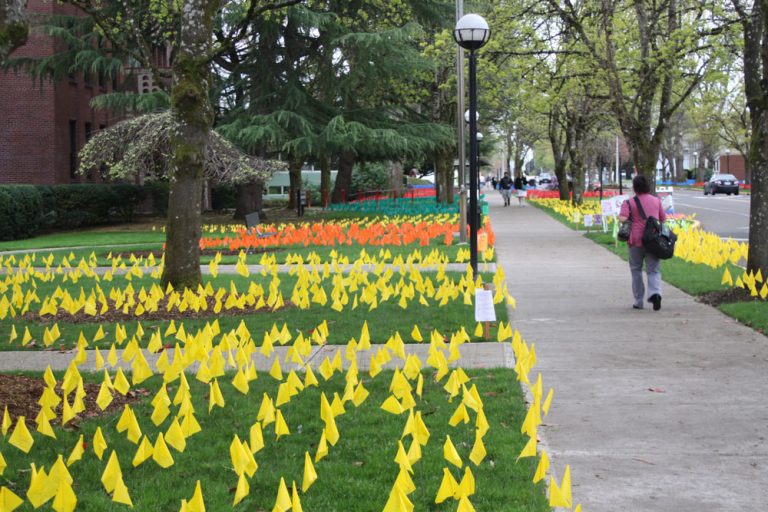 Holocaust Remembrance Day begins Wednesday, May 4 and ends the evening of Thursday, May 5. Each year, Western Oregon University puts on an event to remember the tragedy that was the Holocaust.

As in previous years, volunteers will help set up flags on campus on May 3 and help take down the flags on May 5. These flags are meant to be a large, powerful, display representing the lives of millions lost. There are different colored flags that represent the lives lost of certain peoples. The yellow flags represent the biggest number of Jewish lives lost. Look out for the sign near the flags that explains the different colored flags with total numbers and the groups they represent.

The speaker this year will be Deb Mrowka sharing the story of her mother, Eline Hoekstra Dresden. Eline Hoekstra Dresden was born in 1923 in The Hague, The Netherlands as the youngest of four Jewish children. At the beginning of World War II, her family took in two Jewish refugee children who were sent away from Germany by their parents to be kept safe. When The Netherlands was invaded, the two children were forced to leave to be deported to Auschwitz.

In 1941, she was expelled from the college she was attending by the Nazis. Later on when she had given birth to her son Daniel, she sent him to a non-Jewish family in order to be kept safe just in case something happened to her and her husband. In April 1943, Eline and her parents were ordered by Nazis to be deported to an internment camp called De Schaffelaar in Barneveld, The Netherlands. Later that camp was deported to Westerbork transit/concentration camp. Eline went through so many awful happenings while she was imprisoned at the concentration camp until she was liberated by Canadian troops on April 12, 1945.

Eline and Deb have been sharing their story for years hoping to influence kindness and tolerance toward all people. Everyone is very much encouraged to join Student Leadership and Activities on Thursday, May 5 at 4 p.m. in ITC 211 to listen to Deb Mrowka share this powerful story of her mother’s experience during the horrendous time of the Holocaust.

Holocaust Remembrance Day is so important to recognize in order to remember the genocide, torture, and other terrible occurrences during World War II for millions of people. All students are welcome to participate in this event by seeing the flags and knowing what they mean, coming to watch the amazing speaker that is Deb Mrowka, and understanding the Holocaust as a whole and remembering the lives lost.