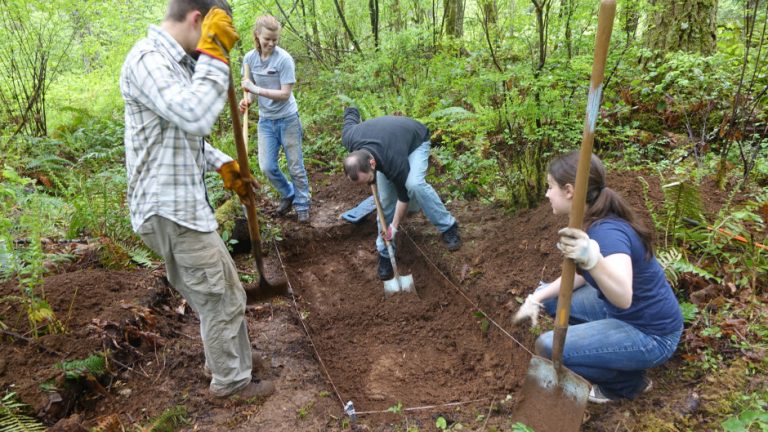 Forty centimeters is a long way down when you’re digging a pit in the forest.

“That’s why you never find perpetrators burying a body six feet under – it’s way too much work,” quips Western Oregon University Professor Misty Weitzel to the raucous approval of her sweaty students.

These Western Oregon University students aren’t burying bodies. They’re digging them up.  Weitzel assures that the bodies are not human.

“What we have are three domestic pig burials that were placed in the ground 10 years ago,” says Weitzel, who teaches criminal justice.

Back in 2006 Weitzel started researching decomposition rates in Oregon’s Coast Range using pigs as stand-ins for humans. Like humans, pigs are omnivorous and basically hairless. They also have chest cavities and bone density that are similar to those of humans.

“The number one variable that influences human decomposition is that weather — so the temperature and humidity,” Weitzel says.

There are a few “body farms” around the country where people donate their cadavers for this kind of forensic research. The oldest and most famous is in Tennessee. But nothing like that exists in the unique climate of the Pacific Northwest – meaning forensic scientists here have few reliable techniques to figure the time of death of a body that’s been in the ground longer than a month or two.

“Time since death is one of the most important roles of a forensic anthropologist, in addition to assessing that biological profile. So we need to gather all the information we can to try to solve that,” Weitzel says.

As part of her decomposition research, Weitzel is harnessing student volunteers like Zairet Solis to exhume the bodies.

“I’m hoping that I can work in the forensics anthropology field – something in the crime lab,” Solis says.

It’s a rare opportunity to get experience in the field; there just aren’t that many buried pigs out there for students to practice on.

Human remains in the United States are often Native American and protected by federal law. Having students work active crime scenes is usually out of the question because of concerns about evidence contamination. Europe is often the only outlet for students wanting to advance their skills in forensic anthropology – and that’s expensive.

Given the chance, eight of Weitzel’s undergrad students volunteered to make the trip into the woods to excavate the buried pigs.

Their enthusiasm to hit bone is palpable, even after three hours of digging in mosquito-filled woods, tediously removing one horizontal layer of clay at a time. Contact with roots, rocks and charcoal trigger false alarms.

“Got it!” senior Martha Kools yells as her shovel unearths the tip of something very white and about as big around as a thumb at about 38 centimeters down, close to where the original pigs were buried. “What do you think?”

The other students working the perfectly rectangular pit with her gather around the spot.

“Oh, it’s moving,” says one of her classmates as the white object begins to squirm.

“It looked so close!” despairs Kools, as she picks up uncomfortably large grub and tosses it into the pile of fill dirt beside the pit.

They all go back to digging.

Getting down to the pig bones is important for Professor Wietzel’s research, which involves examining the microbial make up of the soil around the bones.

When a body decomposes, it changes the mix of bacteria in the soil around it. Weitzel has found these changes peak at about a year after burial. Then the microbial population begins to slowly revert to what it was like previously — similar to what’s found in in soil samples  collected about 15 feet away from the bodies.

Soil samples taken around a spot where Weitzel left pigs on the forest floor still showed variation from that norm seven years out. The 10-year samples for those pigs are being tested now.

With the students’ help, Weitzel plans to test the soil around these buried pigs to see if the pattern holds.

Finally the pig bones start to emerge from the pit — first the small bones of the feet, then “long bones” like femurs, then vertebrae, ribs and lastly the fully intact skull.

“This gets addicting after a while. I just want to keep on digging and finding more stuff,” says Henderson.

His focused obsession soon spreads – especially to Daisy Romero, who spends hours on her knees unearthing bones with a small trowel.

“That’s the fever,” Professor Weitzel says after Romero declines an offer from a classmate to switch out.

“I think that’s why I’m not tired,” Romero says.

She keeps her laser-like focus on unearthing the ribcage in front of her.

“You’re going to still be out here at midnight,” her classmate jokes.

“Yeah, I’ll be like ‘I found everything guys!’” Romero says.

The students take soil samples from the dirt above and below the pigs.

The hope and promise of Weitzel’s research is that forensic scientists will one day be able to look at the variety of microbes in the soil to determine how long a body has been on or in the ground – even if there’s no longer any visible physical evidence of that body.

“If we can add time since death, we know how long that body has been there. That’s going to narrow a pool of missing individuals perhaps, maybe even narrow down the suspect,” Weitzel says.

This is a holy grail of forensic science.

And maybe the students Weitzel is training today will be able to use that knowledge as professionals to help solve violent crime in the Northwest.