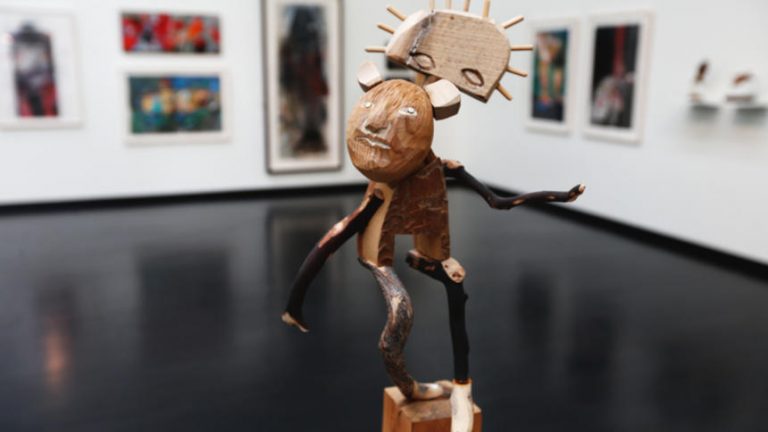 Despite battling post-traumatic stress disorder and alcoholism spawned by serving as a soldier during the Vietnam War, Rick Bartow was not afraid to use his artistic talents to address painful aspects of life.

It’s a sentiment art enthusiasts may see as they view the Native American man’s art, which is on display through July 13 in the North Dakota Museum of Art. About 125 pieces of his work — from paintings to sculptures — in the exhibit capture how the artist pulled inspiration from an array of events, emotions and Native American culture to portray striking and colorful images.

“We get to see the joy of color,” Bartow’s agent, Charles Froelick, said. “He strove to make his art his own.”

The North Dakota Museum of Art is the third stop for the tour named after the oldest piece of work in the exhibit, “Things You Know But Cannot Explain.” Unlike other Native American artists, Bartow used intuitive and personal emotions for the canvas, which resulted in a range of themes — from happy, playful sculptures to dark, unsettling imagery.

Bartow is recognized as an influential artist on the West Coast and among Native American artists, with his 20-foot sculpture, “We Were Always Here,” standing in the National Mall in Washington, D.C.

The nationwide tour has been in the works since the spring of 2013, Froelick said, but the North Dakota visit comes after the artist died April 2 from complications resulting from congestive heart failure. He was 69.

A member of the Wiyot Tribe of Northern California, Bartow graduated in 1969 with a degree in art from Western Oregon University. Almost immediately, Froelick said, Bartow was drafted and served from 1969 to 1971 in the Vietnam War.

“He said it was such an awful experience to be told by his government to kill people he thought looked like him,” Froelick said.

Bartow battled PTSD and alcoholism, and after getting sober in 1979, he painted “Things You Know But Cannot Explain,” a drawing that features a man crying out against a black background.

The piece is what started his career, Froelick said, making it an idea centerpiece for the exhibit.

“It’s a trace of what is the evolution of his work, how did he mature as an artist,” he said.

“It’s contemporary art, but it comes from a Native point of view,” she said. “He’s also a terrific colorist. He is very, very good with informal qualities. Informal qualities is what he cares about.”

Froelick said Bartow was just one person making art and that he was thankful others enjoyed it. Though the artist went through hard times, it was important for Bartow to express himself.

“I’ve not been to war, so I don’t know what it is like there, but he’s been,” Froelick said. “If someone is told, ‘Keep it inside,’ what do you think will happen?

“I would also say if all we have is art about sunflowers and pansies, we are going to be missing out on a complete half of a part of a life. How wonderful he could express both.”

The world is full of inspiration, Froelick said, and though some aspects of life are painful, it is important to not only endure but to use even the worst experiences to inspire others.

“It might be hard when you first dip your toe in that cold water, but you’ll be better,” he said when asked what he would like to see visitors take away from viewing the exhibit. “You can make things better.”