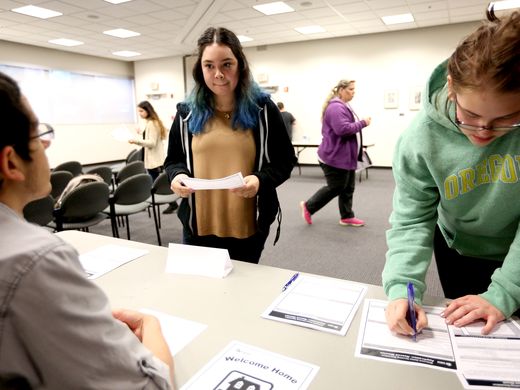 These words and phrases were repeated over and over again as students at Western Oregon University took on the personas of the homeless Thursday evening.

The university’s Education Club organized the homeless simulation, modeled after a Habitat for Humanity program.

The group said they wanted to spread awareness and help those experiencing homelessness in Marion and Polk counties, which, as of 2015, numbered about 1,660 people.

Each person who attended was given a participation sheet describing the person they would represent. They were then required to travel to different spaces in the room to attempt to secure housing. Some succeeded; others did not.

Estefania Cortez, 19, portrayed a 30-year-old man with two daughters. The character was injured as a construction worker and lost his job as a result, rendering the family homeless.

When Cortez went to apply for Section 8 housing as this man, she was told there was an eight-year wait until the application would be reviewed, should her character qualify.

She was told this after four simulated days of searching for shelter.

Having done a simulation like this in the past, Cortez said she thinks it is a great way to show what homelessness might be like in the real world.

“Being homeless is a really big deal that affects everyone,” she said.

In a previous simulation, Cortez’s character had a child who had been suspended from school. Since she couldn’t afford to have her child in day care, she had to take off work, and lost her job as a result.

“These are real, true things that happen,” she said.

Cortez said the simulations help you think about things you wouldn’t normally realize someone might have to face if they are homeless, like keeping their kids in school or where to take the children when they can’t go to class.

For Eden Flores, 19, Thursday’s simulation was the first she’d participated in.

Her character was a 35-year-old male with no job, no family and an undergraduate degree. He had a background in business, but after an addiction to alcohol affected his ability to work, he was fired and became homeless.

He was turned away day after day because he was “overqualified.”

When Flores finally found housing, she said it was a big relief, but she was only able to secure one night of shelter.

She said she was surprised how long it took to find a place to stay and how long the waiting periods were, especially for Section 8.

In addition to the simulation, there was an opening presentation discussing the topic of homelessness — what it means, who it affects, and what people can do to help. There were a couple tables topped with donations people brought as well, which will go to the Salem-Keizer School District Students in Transition Educational Program (STEP) and the Simonka Place women’s shelter in Keizer.

Emily Boatwright, 19, presented at the event, starting her presentation with a story about her father growing up sleeping on the streets.

“The question tonight is, ‘What can you do to help?’,” she asked the crowd.

Boatwright advised attendees to donate time and belongings to help those in need, to be conscious of the vocabulary they use when discussing homelessness, and to show up to events like Thursday night’s to gain a new understanding of the issues these people face.

This story was published in the Statesman Journal and written by Natalie Pate.