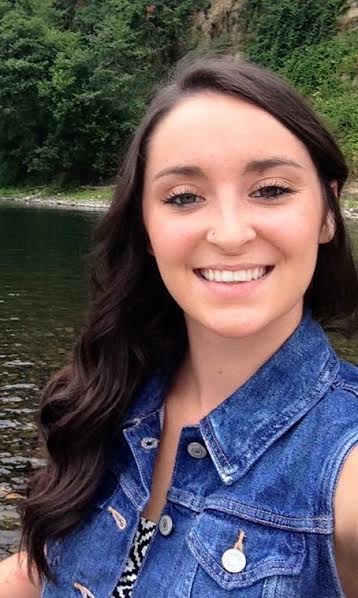 Becca Hazel is a graduating community health major. She has been very involved and interested in the community health projects here at Western. She chose to come to WOU because it has the OHSU nursing campus and the really small class sizes. Another reason for choosing Western was to stay close to her grandma who became really sick before Hazel started her freshman year.

Hazel felt very connected to the professors here. “The teachers are unlike anything else. They actually care about your success and want to get to know you which I didn’t expect out of a university. Everyone has always told me that sometimes the teachers aren’t even the ones that teach the classes, they’re not the ones that grade your papers like at other universities, so I think I was really lucky to come to WOU and actually experience it’s professors who wanted to know you and help you succeed which is pretty awesome.”

Hazel enjoyed the small community feeling of Monmouth because it felt like home. She loved that the people who owned restaurants or businesses would know your face and name. She especially likes Rick’s because nobody from campus knows it’s there. She loves the sandwiches and soups and the quiet environment makes for a great place to study.

As for studying on campus, Hazel chooses the DeVolder Family Science Center as being the best place for the task. Being a visual person, the big available whiteboards help Hazel focus and solve study problems easier. She also loves it for being peaceful and quiet as not a lot of people are around usually.

Community health has always been an interest of Hazel’s. Growing up sick with parents who were also sick, Hazel has experienced people treating them like a health statistic or just looking at their test results rather than looking at them. She explains that there’s always a story about somebody and a reason behind their illness. “My job as a community health person is to understand that story and to make a program or to find the services that would fit best with them instead of just giving them medication or giving them a regiment that they’re not going to be able to follow because of time constrictions, education restrictions, or money constrictions. I want to be able to hear their story and give them the best possible outcome by making a plan that’s going to work for them. You really need to understand those personal barriers for them to be able to change their health. It’s a huge problem.”

The biggest community health project she’s been involved in is the school’s Food Pantry. She does a lot of volunteering there and has received a Food Pantry Volunteer of the Year Award.

When asked what inspired her to get involved with the Food Pantry, Hazel explained, “Over 50 percent of our students here are food insecure and it’s a huge problem. I can’t even imagine trying to study with an empty stomach. Food is something you need to be successful and a lot of people didn’t know about it so I really wanted to help Christie, the president of it, get more word out, gain more funding, get a more consistent shipment of food, find places that will donate fresh produce and eggs, and make sure the resources are being used by those who need it. So that’s our goal and it’s gotten a lot better. We’ve gotten the word out from just Fall term to this term. We have gained so many people and helped so many people that didn’t even know the Food Pantry was a thing. So that was the goal and it’s good to see that it’s used.”

Hazel very much enjoys working at the Food Pantry and said, “I enjoy being able to connect people with the services that they need because I know how difficult it is to admit that you need help, how difficult it is to try and search for that help on your own, and to be able to have it in the easy, accessible way for people. To show them that there is a service without them having to do a bunch of research or seek it out or join a program. I just wanted to make it easy for them to get what they need. We have food, we have clothes, sometimes we have cooking supplies, so it really help people. If we get pots and pans that are donated, we have that on the rack next to the clothes. There’s a lot of stuff that we have.”

Hazel admits that the Food Pantry becomes more and more successful each year, but there are certain things she wants to do to help it grow even more. She noticed while working there that there’s not a consistent way to access information in an anonymous way. Although there’s a Facebook page anyone can access, she wants to make a tab for the Food Pantry on the WOU Portal page so that anyone can access it without having to join a Facebook page. She says it’s still in the works because it’s a huge project to try and work on.

Looking back to when Hazel first began her journey as a freshman, she has some advice that she wishes her freshman self could have known. “I wish I could tell myself to not stress out as much and that everything was going to be okay and to enjoy it a little bit more. I’m a very goal-oriented person and my freshman year, I was so scared that I was going to fail or disappoint people. I wish I knew that it didn’t matter as long as I was happy. It would have made things a little easier and I would’ve maybe branched out a little bit more my freshman year. I did that a little bit later and wish I had done it sooner, but it all worked out. It was a great experience.”

After graduation, Hazel will start OHSU’s accelerated nursing program on June 20. It’s a very fast program, being only 15 months long. Her plan is to become a public health nurse. When starting the community health program here at WOU, Hazel admits to not knowing if she would like it as much as she thought because it was a lot more theory-based than expected. It took some getting used to, but she eventually fell in love with it and realized how important it is. She gives thanks to the teachers that helped her understand that medicine isn’t a one-sided thing. To actually help someone and keep them healthy, it takes prevention and giving them all the different outcomes and possibilities by creating personal plans for each individual.

“Thanks to everything I’ve learned here I have realized that public health nursing is definitely my calling.”