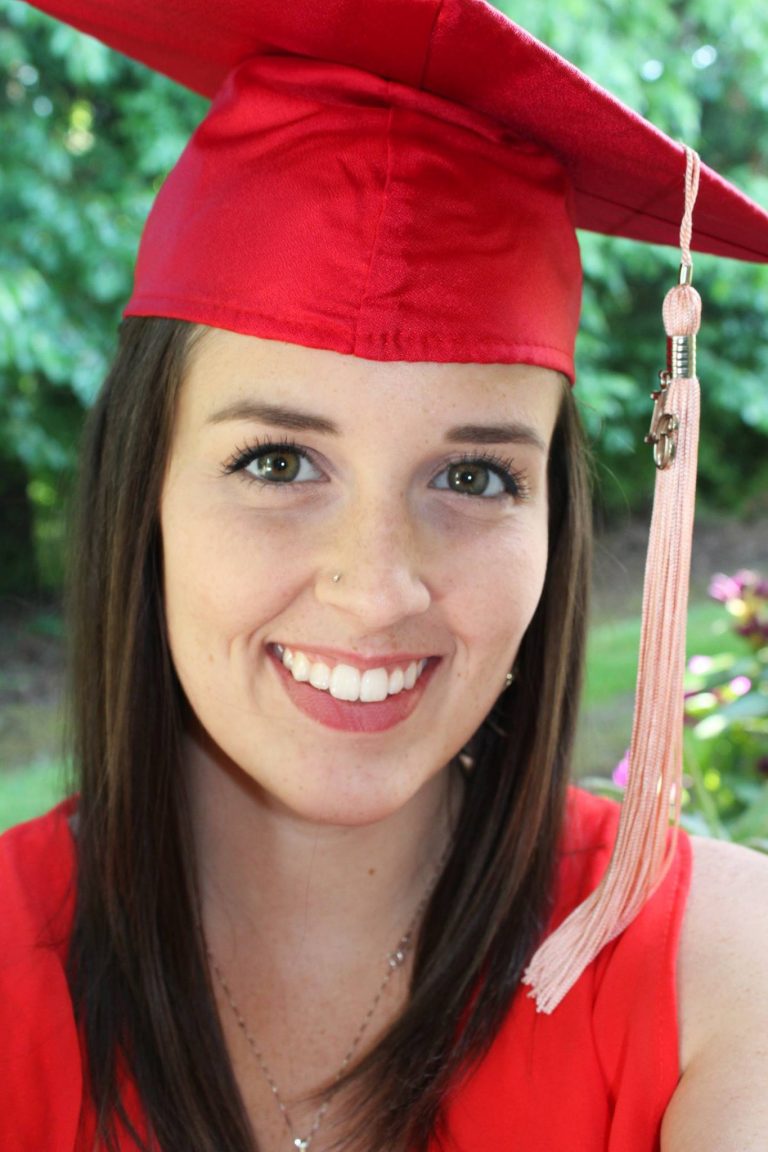 Ashley Baxter is a graduating community health major. Baxter chose WOU because she heard it was affordable and when she toured the campus, she fell in love with the beauty.  “I just knew I’d be happier here at this type of university.”

Baxter enjoyed the amount of opportunities that Western gave her that helped her expand her knowledge and helped her to get involved in the community. She says that professors are always encouraging you to go out and do things.

Her favorite spot to study was the DeVolder Family Science Center. “Being the scientific studier that I am, I like the DeVolder building. It’s always very quiet and it has those study alcoves and those big whiteboards. It just has everything. I find the library too crowded. You have to be creative.” Joking she said, “Or Abby’s House because I have the keys in there and I can just hide.”

Baxter went to so many on campus events that it was hard to choose just one as her favorite. “Of course the Date Doctor, you know he comes every year. I really enjoyed the Holocaust survivors that we’ve had come speak and more of those personal stories and testimonies of people. It really puts these big issues into perspective. It’s someone who’s been through it and experienced it, so I think that’s interesting. It’s awesome that they do that for us.”

Baxter was very much involved at WOU during her time here. She’s a student advocate for Abby’s House, she does extracurricular work with the community health department, she recently presented for the Academic Excellence Showcase, and she was a contender in the Alfred Maurice challenge which she also won.

With the community health department, Baxter has gone to the capital and lobbied for equal pay day and similar issues for the past two years.

She was inspired to get involved with Abby’s House through her women’s health class. The class taught about women’s health more indepth and got into social issues that Baxter could relate to. Her class did a partnership with Abby’s House where they got a grant renewal for the health center. “It allows the birth control to be paid for. For next year at least. They did have it, but they stopped funding it so we worked really hard to get that back. It was at the end of last year so it won’t be renewed until this fall, but it’s progress either way.”

During her time at Abby’s House, Baxter worked on Take Back the Night which is one of Abby’s House’s bigger events in the fall. Through Abby’s House, Baxter did her project for the Alfred Maurice initiative. It was a survivor awareness campaign called #believesurvivors. Photos were posted all over campus for a while and they were used for Speak Out, the school’s sexual awareness month event.

When asked about her experience  participating in the Maurice Undergraduate Initiative Prize, she laughed and said, “Very unstructured, but that was intentional. They do that on purpose to see what you’ve got. I found out about it in October and submitted my proposal and then had 5 months to work on it. Then I submitted an analysis. In that time, I formulated my own photo campaign project and I structured it the way I wanted with no influence from their end. I used my resources from Abby’s House and my community health background. I pulled those together to create this series and it was pretty cool because events just fell into place. I was an advocate so I decided to partner up with them and use my photos for sexual assault awareness month. I’ve also used that networking that I’ve got from the capital to tie in with my project and expand it beyond Western which has been pretty fun. It’s been quite the experience.”

When she found out she won, Baxter felt humbled. “It was kind of unreal at first just because I never thought it would become this big thing that it has. I was very pleased because that just showed that it got attention and that was my goal. It’s a very important issue.”

After graduation, Baxter will be doing an internship at the Helfgott Research Institute at the National College of Natural Medicine (NCNM) in Portland. There she’ll be conducting her own studies for different CAM (complementary and alternative medicine) therapies and tying that in with the Portland population. She’ll be doing integrated medical research.

“After that, I hope to continue on at that institution and get my ND which is a naturopathic physician degree. With that, I want to work towards prevention. While I’ve done community health, I’ve realized that prevention is crucial and not enough people are practicing it. If you can teach people to practice it, it gives them that autonomy to take control of their health and their own well-being and eventually that helps everyone. I’ll be building prevention outreach programs and less invasive therapy.”

As a freshman, Baxter didn’t know as much as she does now. What she wishes she knew as a freshman includes so many things. “You really have to get involved and get yourself out there to really change anything. I’m speaking more on a personal level than on a grander level. If you want to build your character into your experience, you need to take that opportunity and act on it. Getting involved early is important and it helps you find your passion and your interests.”

“College goes by fast. It may not seem like it at times, but when you’re there, it’s like ‘wow, what was that?’ and then you’re just spit out into the world and like ‘I’m supposed to know things.’ You won’t be prepared for it, but it’ll be exciting! Onto bigger and better things.”

Congratulations, Ashley! We can’t wait to see how you improve community health in the future!