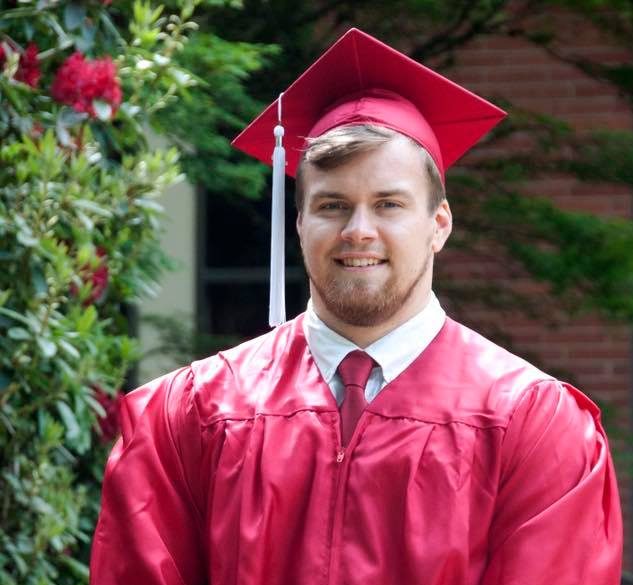 Name:  Conner Williams
Age: 22
Major/minor: Humanities/economics
Hometown: Molalla, Ore.
Favorite campus event: New Student Week
Best study spot: Terry House
Advice to incoming freshman: “Get involved a little earlier. As a freshman, you can easily get caught up in the mindset of having a college experience as it’s shown in movies, but there’s much more to your time in college.”

For many students at WOU, their decision to study here was intentional. For other students, like Williams, WOU seemed to decide on them. In Summer 2014, he was visiting campus to see his younger brother at a football camp.

“I happened to meet coach Ferguson and we hit it off. I was invited to a team workout, it went well, and I was offered a scholarship.”

Prior to WOU, he had played football and studied at Linfield in McMinnville. He had not yet committed to a program of study there, and knew he wanted to transfer to a different university.

“If I could do it again, I would have gone to Western right after high school. Here has felt like a home-away-from-home, people smile at you on the sidewalk. It’s been rewarding to feel like I belong here,” he explained.

Although Athletics were the initial draw to the university, Williams began exploring other forms of involvement available and realized he had a passion for writing. Mid-way through his junior year is when he pinpoints his involvement really picking up. He became a part of Student Media—specifically The Journal—and then started tutoring for the Writing Center and reporting for the Statesman Journal.

Naturally, his studies began to match up with his involvement. With strong advising from Drs. Katherine Schmidt and Cornelia Paraskevas, he chose to undertake a degree in humanities with concentrations in communication studies and writing.

“This path allowed me to take multiple interests and put them into one degree, and it also lead me to graduating in a timely manner.”

Stretching across different departments, he had the chance to interact with many faculty. He had a lengthy list of people to thank, and highlighted Drs. Jane Babson, Lars Söderlund, and John Leadley.

“I genuinely feel the faculty at Western care about the success of their student population. These professors set me on a path while at WOU and in my career, and showed me what you can do with writing. They were all important influences, and helpful both in and out of the classroom.”

For the 2015-16 academic year, Williams served as Editor-in-Chief of The Journal, WOU’s weekly, student-run newspaper. His passion for journalism and helping students made him ideal for the role, and this year the newspaper saw numerous positive changes and additions.

“I’m proud that as a team of writers we changed our production practices and content in order to best fit our target audience.”

He also noted his coverage of Holocaust Remembrance Day as a proud moment as editor.

On top of coursework and tutoring, he was a newsroom reporter for the Statesman Journal every weekend.

Others have noticed his strengths as a writer and journalist. This fall, an opinion piece concerning the ethical dilemmas of convenience store clerks earned an honorable mention among the top 10 national finalists by the Associated Collegiate Press.

As his time at university comes to an end, he realized that his perspective on graduating might be a little different than other students.

“For some, it’s a manifestation of all that they’ve done in one area at WOU—but for me graduation is a culmination of all the different steps it has taken to finally get here. It’s also about all the help I’ve received from the professors, the academic advisers, and the Registrars’ Office. All the work I’ve done over the last five years is ending and I’m taking the next step.”

Learning to follow his passions has already started to pay off.

“I recently had a job interview with a PR firm in Portland which went really well. In July I’ll begin a trial period to see if I’m a good fit for their company. It’s an exciting opportunity and I’m looking forward to it. I like the hustle and bustle of the city, but part of me will miss the serene environment of Monmouth.”

Before Williams enters the world of nine-to-five jobs, he will celebrate graduation with a three-week vacation to California and Hawaii with close friends.