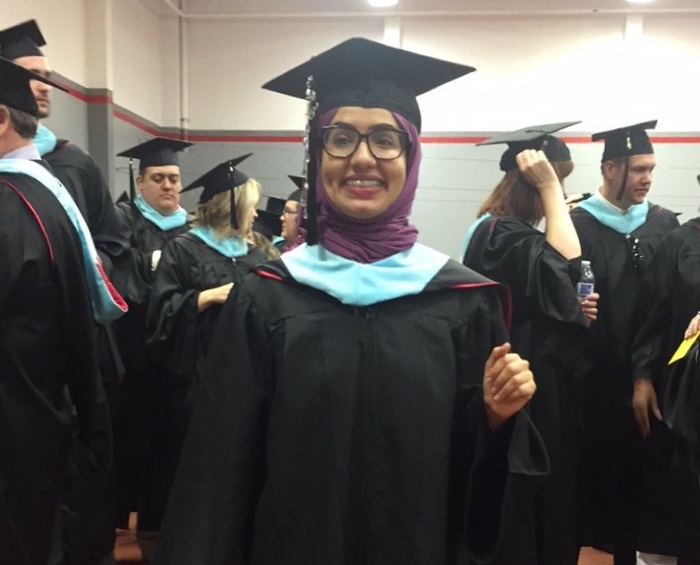 Mashael Alansari is a graduating masters student getting her master’s in education. She chose WOU because her close friend studied here before her and talked about classes that were interesting. Her friend then encouraged Alansari to apply. She looked at the program and liked the description of courses.

Alansari very much enjoyed her time at WOU. When asked what she enjoyed the most, she replied with, “Classes. I love my classes. I love most of my professors, if not all of them. They give us our own room for creativity. They don’t have solid assignments, they have many options. You can talk to them, you can ask them. Also, the type of the relationship. They help you in a very comfortable way. They understand that we are students, we have many things to do in our lives. They are not really strict. They answer all my questions. They understand that we come from a different country, we speak a different language and they respect that. They are not ignorant and they always ask us what we think or try to see our perspective.”

At WOU, Alansari didn’t have much free time. As a graduate student, she was taking twelve credits. That’s a lot! When she did have free time she used it by either going to the Writing Center or the office of International Student Academic Support (ISAS). Alansari states that she’s really thankful for everyone at the Writing Center, but she’d particularly like to thank Rosario Peralta and Daniel Thom. She’s also thankful for Frank Asay in the office of ISAS for helping her improve her English from the day she started going to WOU. “They gave me their time, not just from the programs, but even after their work day and stayed to help me, just volunteering. I’m really thankful for all the people, but these three specifically after my professors because when I faced challenges with some of my assignments and some of my final projects, they were always there for me.”

There are many reasons that inspired Alansari to study in the United States, but a main reason was to study the English language. “Before I came here I didn’t speak English and English is really the main thing. I can connect to many people around the world that are not just necessarily from the United States, but from everywhere. It’s the language of the world. I can learn more about different subjects, I can find sources. Even when I was studying my bachelor degree for microbiology, I couldn’t find a lot of information because not very many sources were translated to my native language. So I had to ask some friends to translate for me or just not read anything at all. It was feeling like I’m left behind, not just in my major but in many things. I wanted to travel everywhere and not have trouble finding connections with other people, I can’t do that with my native language.”

Her other reason to study in the U.S. is its diverse nature. She states that in her home country, people are similar in that they follow the same religion, speak the same language, and have the same culture to some degree. She says it differs greatly from the U.S. because here there are many people from different countries that might have a different language, religion, and culture. Alansari says it’s interesting to learn more about others’ experiences and their backgrounds. “This was what really interesting to me, and this is why I chose the United States. As a Saudi female, I felt like someone was always taking care of me in Saudi Arabia. As a girl I would stay at my parents house until I got married and I couldn’t leave my parents house. I felt like taking the chance at being outside my comfort zone studying abroad. Trying to be more dependent on myself means a lot to me. Maybe this is one of the reasons to say, I heard the United States welcomes everyone, so being foreign in this country is not a big deal. This is one of the reasons I chose the United States.”

Alansari said that there are definitely similarities between the U.S. and Saudi Arabia. “You might laugh, but in the beginning whenever I saw something similar I’d say, ‘Wow they do the same thing!’ I saw that here they have bazaars and I said, ‘Oh a bazaar like ours!’ After six months I said to my friends that we are more similar than we think. People are very similar. Sometimes we express things differently. We have the same values. I started to feel people as not Americans, but as individuals. You need to know them to know their personalities. They are no more to me like Americans or girls or boys, they are individuals.”

When asked why she chose Oregon specifically, she said, “I picked Oregon for different reasons. In the beginning I used to study in Eugene and for English they have an AEI program, which is for international students to learn English as a foreign language. They have a really amazing and very strong program there. So I started studying there and then I moved here after a year and a half.” She also chose Oregon because the weather is very similar to her city in Saudi Arabia. She admitted that the no sales tax policy intrigued her as well. After being in Eugene, Alansari didn’t want to move out of Oregon so she applied and got into WOU.

Luckily, Alansari couldn’t really think of any challenges she faced living in another country. “I have been here for more than three years, almost three years and a half, so I started to forget the challenges. Maybe in the beginning, really being away from my family. It was the hardest part. I visited twice in three years and a half so it was difficult in the beginning. I still miss them but Oregon feels like home right now.”

Teaching has been Alansari’s dream since she was around seven years old. She used to use furniture as students and pretend to teach them. She also tutored some of her classmates in elementary school who had trouble with the schoolwork. She even started to teach her cousins and siblings at home. Her friends would come to her every day over the summer and ask to be taught by her so they could pass their classes. “I started to feel, wow this is a part of me, I can be a teacher! I liked how many of my teachers when I was young affected my life positively. They changed my life. I felt like I wanted to do the same thing for others.”

After Alansari came to the States, she felt that the teachers who taught her English also had a great influence in her want to become a teacher. “They taught me learning English was very important but it was the least important thing that they taught me. They taught me more than that. They taught me how to treat people kindly, how to, a lot of things you know? And I felt, wow, teachers are really great. I want to be a teacher. I can do many things by teaching people and help them to be great and achieve the things that they want. And that way I can make a really big deal in our world.”

After graduation, Alansari wants to become a middle school science teacher. “I feel when people learn about the nature of science, they can learn about themselves more, and the world more too. Why? Because science knowledge is not absolute, it is not one hundred percent complete. It tells everyone that you need to continue trying. To figure it out by yourself. And this is what life is. You need to try, you need to do something. So I feel when we learn science, about the nature of science, we can improve ourselves more and we will think there’s always room for improvements. Also, a lot of people hate science. Especially in middle school and high school. I want to try and teach science in a different way. I will try to teach students in more interactive ways and more hands-on. ” Alansari would love to teach on the west side of Saudi Arabia. In the future, her hope is to teach in Singapore or Malaysia as well.